Faculty To Delay Decision On Hair 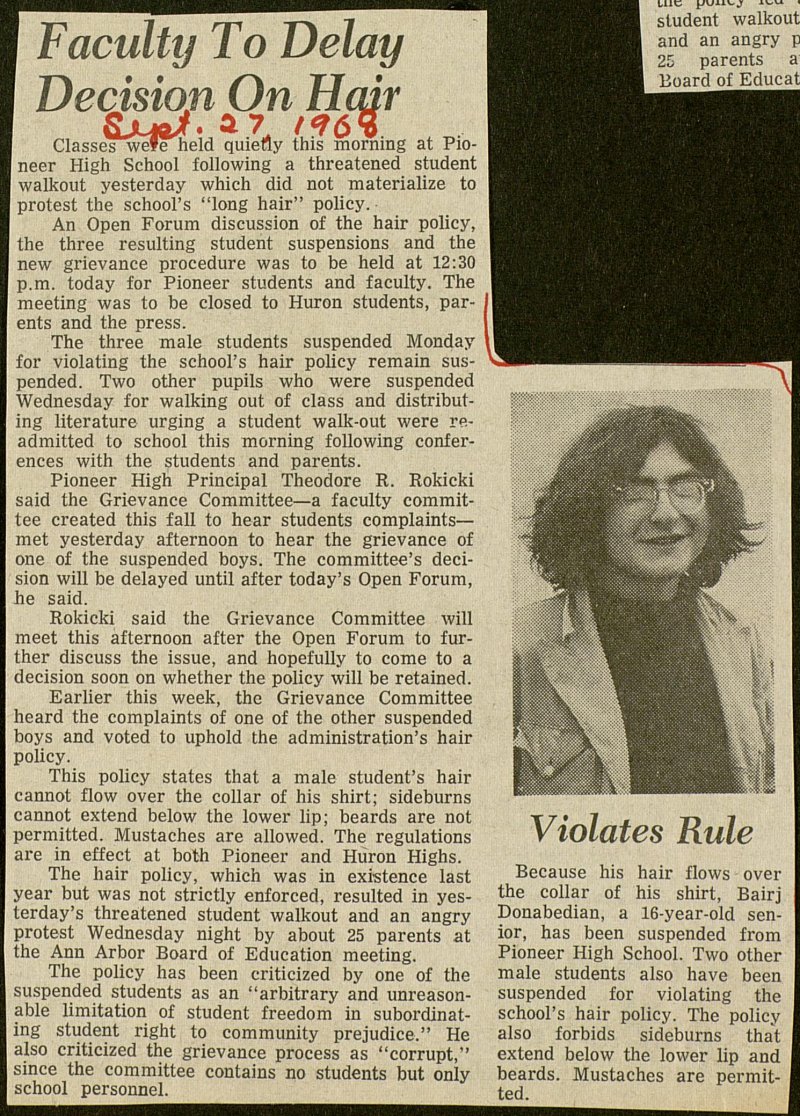 Classeswêfeheld quietíy this morning at Pioneer High School following a threatened student walkout yesterday which did not materialize to protest the school's "long hair" policy. An Open Forum discussion of the hair policy, the three resulting student suspensions and the new grievance procedure was to be held at 12:30 p.m. today for Pioneer students and faculty. The meeting was to be closed to Hurón students, . ents and the press. The three male students suspended Monday for violating the school's hair policy remain suspended. Two other pupils who were suspended Wednesday for walking out of class and distributing literature urging a student walk-out were readmitted to school this morning following conferences with the students and parents. Pioneer High Principal Theodore R. Rokicki said the Grievance Committee - a faculty committee created this fall to hear students complaints- met yesterday afternoon to hear the grievance of one of the suspended boys. The committee's decisión will be delayed until after today's Open Forum, he said. Rokicki said the Grievance Committee will meet this afternoon after the Open Forum to further discuss the issue, and hopefully to come to a decisión soon on whether the policy will be retained. Earlier this week, the Grievance Committee heard the complaints of one of the other suspended boys and voted to uphold the administration's hair policy. This policy states that a male student's hair cannot flow over the collar of his shirt; sideburns cannot extend below the lower lip; beards are not permitted. Mustaches are allowed. The regulations are in effect at both Pioneer and Hüron Highs. The hair policy, which was in existence last year but was not strictly enforced, resulted in yesterday's threatened student walkout and an angry protest Wednesday night by about 25 parents at the Ann Arbor Board of Education meeting. The policy has been criticized by one of the suspended students as an "arbitrary and unreasonable limitation of student freedom in subordinating student right to community prejudice." He also criticized the grievance process as "corrupt," since the committee contains no students but only school personnel. Because his hair flows over the collar of his shirt, Bairj Donabedian, a 16-year-old senior, has been suspended from Pioneer High School. Two other male students also have been suspended for violating the school's hair policy. The policy also forbids sideburns that extend below the lower lip and beards. Mustaches are