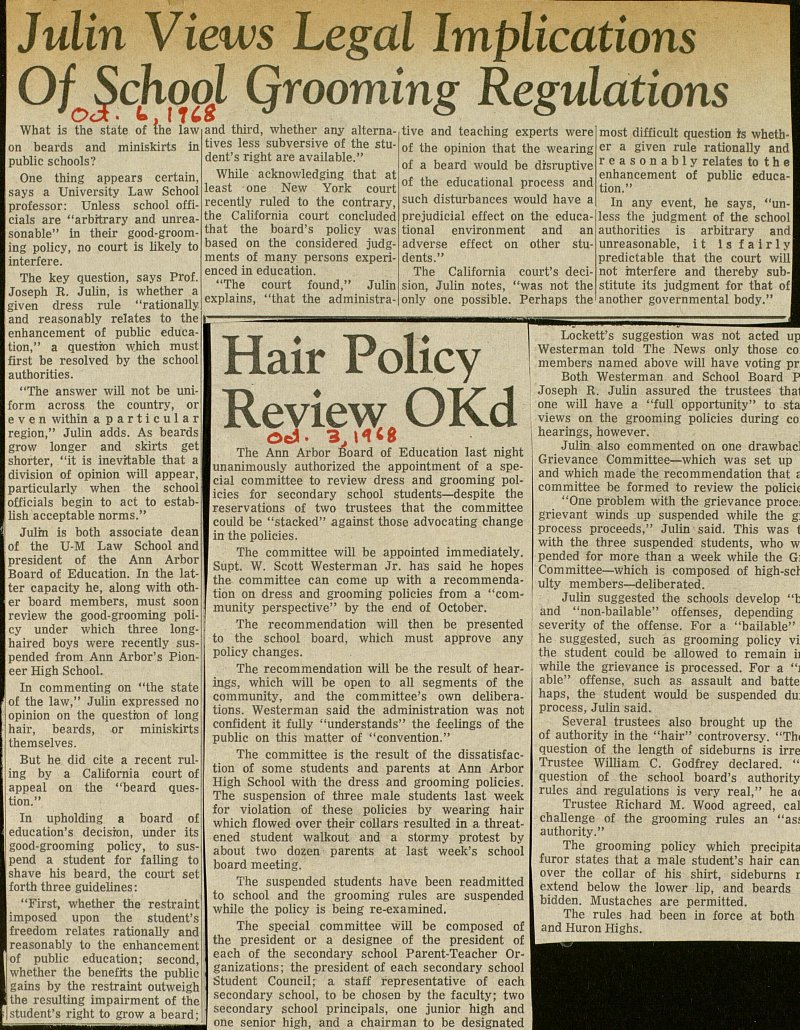 What is the state of the law on beards and miniskirts in public schools? One thing appears certain, says a University Law School professor: Unless school officials are "arbrtrary and unreasonable" in their good-grooming policy, no court is likely to interfere. The key question, says Prof. Joseph E. Julin, is whether a given dress rule "rationally and reasonably relates to thej enhancement of public education," a question which must ñrst be resolved by the school authorities. "The answer will not be uniform across the country, or even within a particular región," Julin adds. As beards grow longer and skirts get shorter, "it is inevitable that a división of opinión will appear, particularly when the school officials begin to act to establish acceptable norms." Julin is both associate dean of the U-M Law School and president of the Ann Arbor Board of Education. In the latter capacity he, along with other board members, must soon review the good-grooming policy under which three longhaired boys were recently suspended from Ann Arbor's Pioneer High School. In commenting on "the state of the law," Julin expressed no opinión on the question of long hair, beards, or miniskirts themselves. But he did cite a recent ruling by a California court of appeal on the "beard question." In upholding a board of education's decisión, under its good-grooming policy, to suspend a student for failing to shave nis beard, the court set forth three guidelines: "First, whether the restraint imposed upon the student's freedom relates rationally and reasonably to the enhancement of public education; second, whether the benefits the public gains by the restraint outweigh the resulting impairment of the student's right to grow a beard; and third, whether any alternatives less subversive of the student's right are available." While acknowledging that at least one New York court recently ruled to the contrary, the California court concluded that the board's policy was based on the considered judgments of many persons experienced in education. "The court found," Julin explains, "that the tive and teaching experts were of the opinión that the wearing of a beard would be disruptive of the educational process and such disturbances would have a prejudicial effect on the educational environment and an adverse effect on other students." The California court's decisión, Julin notes, "was not the only one possible. Perhaps the most difficult question ís wheth- er a given rule rationally and reasonably relates to t h e enhancement of public education." In any event, he says, "unless the judgment of the school authorities is arbitrary and unreasonable, it lsfairly predictable that the court will not rnterfere and thereby sub-l stitute its judgment for that of another governmental body."