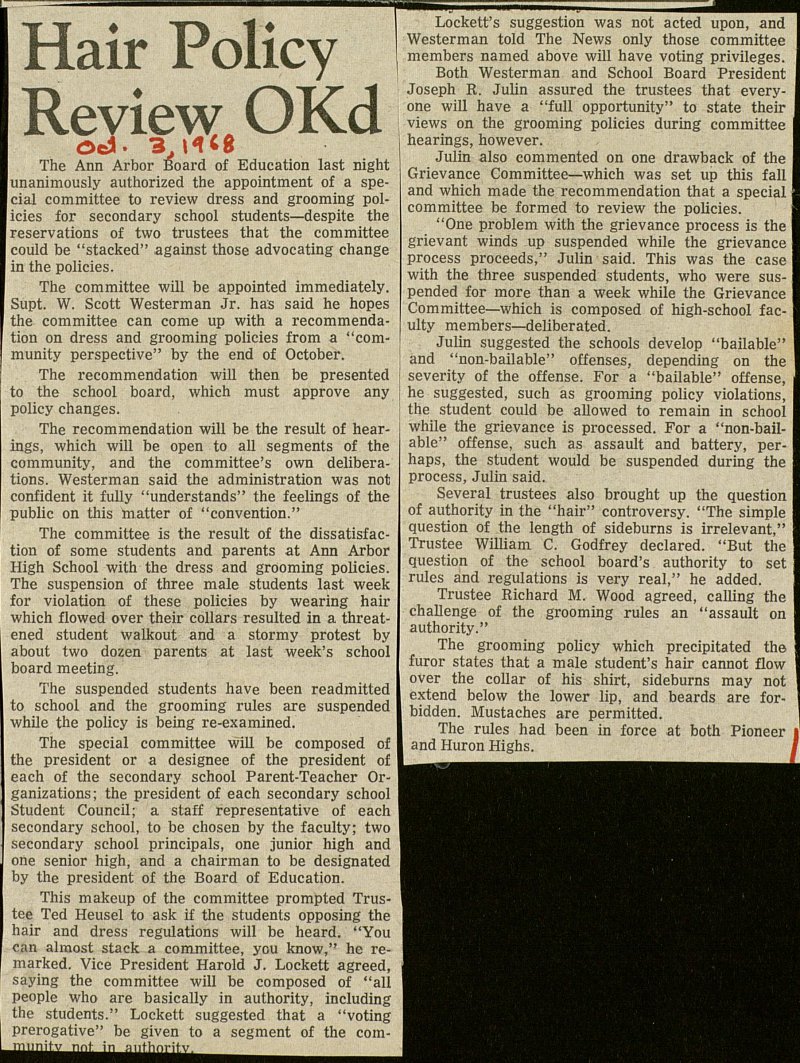 The Ann Arbor Board of Education last night unanimously authorized the appointment of a special committee to review dress and grooming policies for secondary school students- despite the reservations of two trustees that the committee could be "stacked" against those advocating change in the policies. The committee will be appointed immediately. Supt. W. Scott Westerman Jr. has said he hopes the committee can come up with a recommendation on dress and grooming policies from a "community perspective" by the end of October. The recommendation will then be presented to the school board, which must approve any policy changes. The recommendation will be the result of hearings, which will be open to all segments of the community, and the committee's own deliberations. Westerman said the administration was not confident it fully "understands" the feelings of the public on this matter of "convention." The committee is the result of the dissatisfaction of some students and parents at Ann Arbor High School with the dress and grooming policies. The suspension of three male students last week for violation of these policies by wearing hair which flowed over their collars resulted in a threatened student walkout and a stormy protest by about two dozen parents at last week's school board meeting. The suspended students have been readmitted to school and the grooming rules are suspended while the policy is being re-examined. The special committee will be composed of the president or a designee of the president of each of the secondary school Parent-Teacher Organizations; the president of each secondary school Student Council; a staf f representative of each secondary school, to be chosen by the faculty; two secondary school principáis, one junior high and one senior high, and a chairman to be designated by the president of the Board of Education. This makeup of the committee prompted Trustee Ted Heusel to ask if the students opposing the hair and dress regulations will be heard. "You can almost stack a committee, you know," he remarked. Vice President Harold J. Lockett agreed, saying the committee will be composed of "all people who are basically in authority, including the students." Lockett suggested that a "voting prerogative" be given to a segment of the Lockett's suggestion was not acted upon, and Westerman told The News only those committee members named above will have voting privileges. Both Westerman and School Board President Joseph R. Julin assured the trustees that everyone will have a "full opportunity" to state their views on the grooming policies during committee hearings, however. Julin also commented on one drawback of the Grievance Committee- which was set up this fall and which made the recommendation that a special committee be formed to review the policies. "One problem with the grievance process is the grievant winds up suspended while the grievance process proceeds," Julin said. This was the case with the three suspended students, who were suspended for more than a week while the Grievance Committee - which is composed of high-school faculty members- deliberated. Julin suggested the schools develop "bailable" and "non-bailable" offenses, depending on the severity of the offense. For a "bailable" offense, he suggested, such as grooming policy violations, the student could be allowed to remain in school while the grievance is processed. For a "non-bailable" offense, such as assault and battery, perhaps, the student would be suspended during the process, Julin said. Several trustees also brought up the question of authority in the "hair" controversy. "The simple question of the length of sideburns is irrelevant," Trustee William C. Godfrey declared. "But the question of the school board's authority to set rules and regulations is very real," he added. Trustee Richard M. Wood agreed, calling the challenge of the grooming rules an "assault on authority." The grooming policy which precipitated the furor states that a male student's hair cannot flow over the collar of his shirt, sideburns may not extend below the lower lip, and beards are forbidden. Mustaches are permitted. The rules had been in force at both Pioneer and Huron Highs.