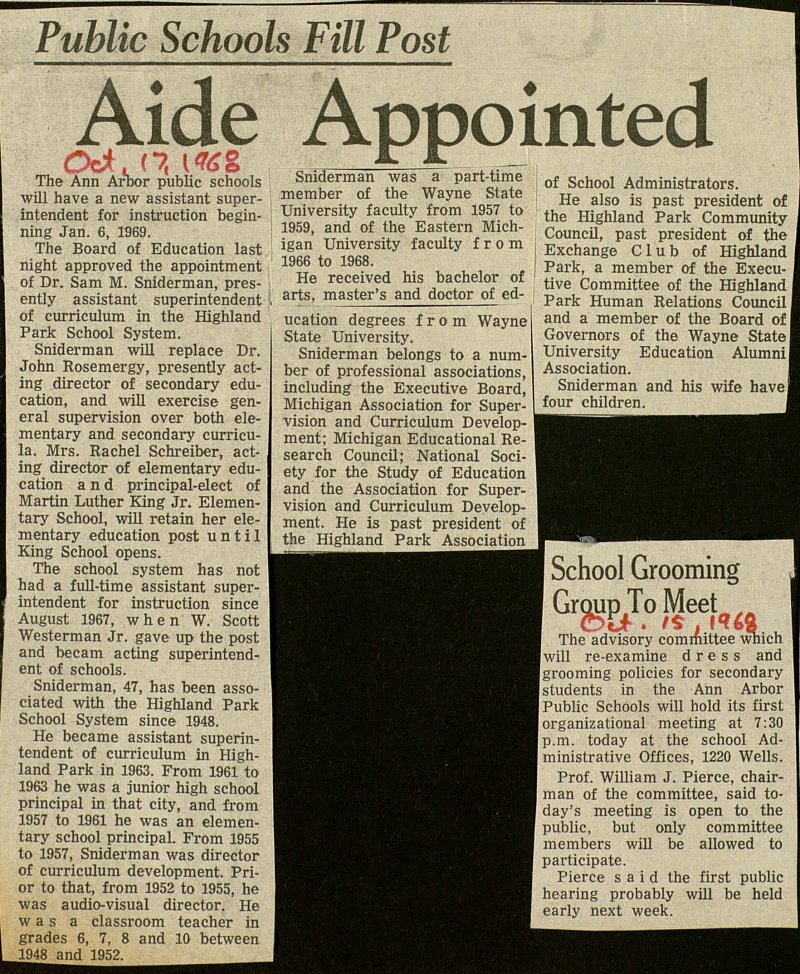 The Ann Arbor public schools will have a new assistant superintendent for instruction beginning Jan. 6, 1969. The Board of Education last night approved the appointment of Dr. Sam M. Sniderman, presently assistant superintendent of curriculum in the Highland Park School System. Sniderman will replace Dr. John Rosemergy, presently acting director of secondary education, and will exercise general supervisión over both elementary and secondary curricula. Mrs. Rachel Schreiber, acting director of elementary education and principal-elect of Martin Luther King Jr. Elementary School, will retain her elementary education post until King School opens. The school system has not had a full-time assistant superintendent for instruction since August 1967, when W. Scott Westerman Jr. gave up the post and becam acting superintendent of schools. Sniderman, 47, has been associated with the Highland Park School System since 1948. He became assistant superintendent of curriculum in Highland Park in 1963. From 1961 to 1963 he was a junior high school principal in that city, and from 1957 to 1961 he was an elementary school principal. From 1955 to 1957, Sniderman was director of curriculum development. Prior to that, from 1952 to 1955, he was audio-visual director. He was a classroom teacher in grades 6, 7, 8 and 10 between 1948 and 1952. _____ Sniderman was a part-time member of the Wayne State University faculty from 1957 to 1959, and of the Eastern Michigan University faculty from 1966 to 1968. He received his bachelor of arts, master's and doctor of education degrees from Wayne State University. Sniderman belongs to a number of professional associations, including the Executive Board, Michigan Association for Supervisión and Curriculum Development; Michigan Educational Research Council; National Society for the Study of Education and the Association for Supervisión and Curriculum Deyelopment. He is past president of the Highland Park Association of School Administrators. He also is past president of the Highland Park Community Council, past president of the Exchange Club of Highland Park, a member of the Executive Committee of the Highland Park Human Relations Council and a member of the Board of Governors of the Wayne State University Education Alumni Association. Sniderman and his wife havej four children. I