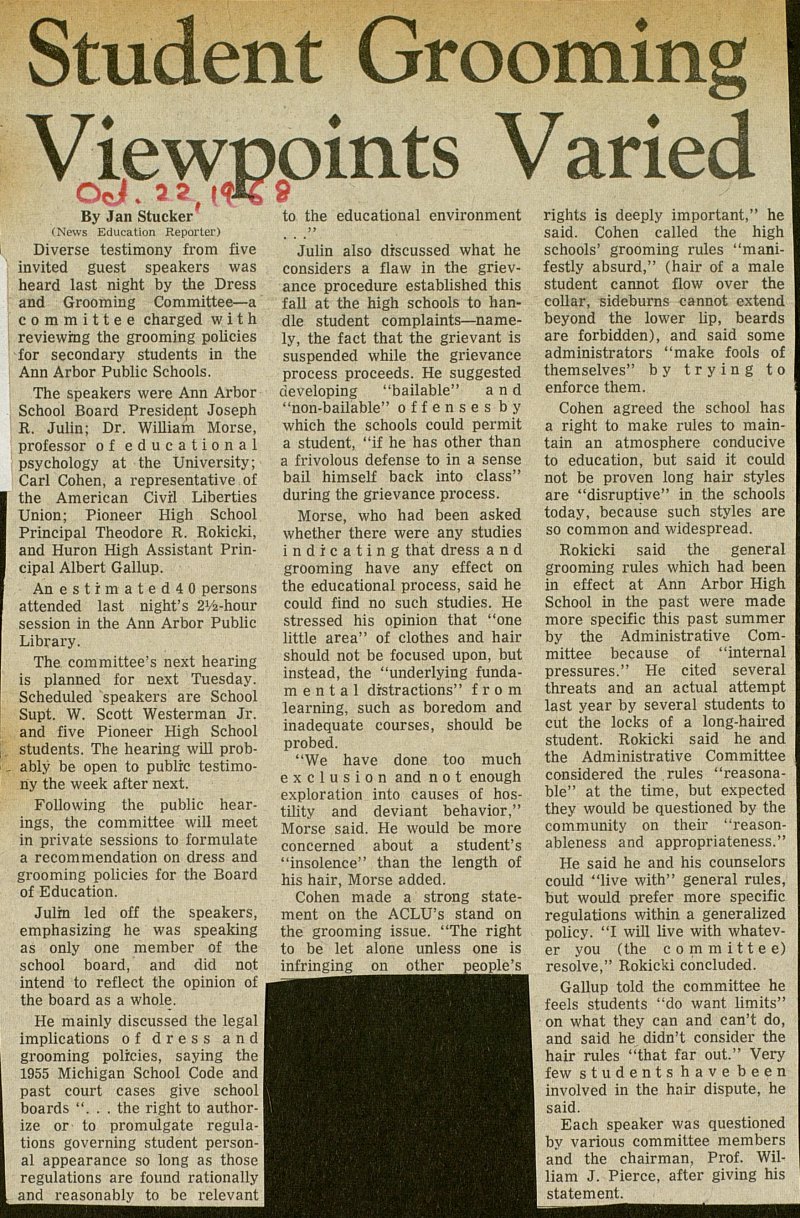 Diverse testimony from five invited guest speakers was heard last night by the Dress and Grooming Committee - a committee charged w i t h reviewing the grooming policies for secondary students in the Ann Arbor Public Schools. The speakers were Ann Arbor School Board President Joseph R. Julin; Dr. William Morse, professor of educational psychology at the University; Cari Cohén, a representative of the American Civil Liberties Union; Pioneer High School Principal Theodore R. Rokicki, and Huron High Assistant Principal Albert Gallup. Anestimated40 persons attended last night' s 2V2-hour session in the Ann Arbor Public Library. The committee's next hearing is planned for next Tuesday. Scheduled speakers are School Supt. W. Scott Westerman Jr. and five Pioneer High School students. The hearing will probably be open to public testimony the week after next. Following the public hearings, the committee will meet in private sessions to formúlate a recommendation on dress and grooming policies for the Board of Education. Julin led off the speakers, emphasizing he was speaking as only one member of the school board, and did not intend to reflect the opinión of the board as a whole. He mainly discussed the legal implications of dress and grooming policies, saying the 1955 Michigan School Code and past court cases give school boards "... the right to authorize or to promúlgate regulations governing student personal appearance so long as those regulations are found rationally and reasonably to be relevant to the educational environment Julin also drscussed what he considers a flaw in the grievance procedure established this fall at the high schools to handle student complaints - namely, the fact that the grievant is suspended while the grievance process proceeds. He suggested developing "bailable" and "non-bailable" offenses by which the schools could permit a student, "if he has other than a frivolous defense to in a sense bail himself back into class" during the grievance process. Morse, who had been asked whether there were any studies indicating that dress and grooming have any effect on the educational process, said he could find no such studies. He stressed his opinión that "one little area" of clothes and hair should not be focused upon, but instead, the "underlying fundamental distractions" f r o m learning, such as boredom and inadequate courses, should be probed. "We have done too much exclusión and not enough exploration into causes of hostility and deviant behavior," Morse said. He would be more concerned about a student's "insolence" than the length of his hair, Morse added. Cohen made a strong statement on the ACLU's stand on the grooming issue. "The right to be let alone unless one is infringing on other people's rights is deeply important," he said. Cohen called the high schools' grooming rules "manifestly absurd," (hair of a male student cannot flow over the collar, sideburns cannot extend beyond the lower lip, beards are forbidden), and said some administrators "make fools of themselves" by trying to enforce them. Cohen agreed the school has a right to make rules to maintain an atmosphere conducive to education, but said it could not be proven long hair styles are "disruptive" in the schools today, because such styles are so common and widespread. Rokicki said the general grooming rules which had been in effect at Ann Arbor High School in the past were made more specific this past summer by the Administrative Committee because of "internal pressures." He cited several threats and an actual attempt last year by several students to cut the locks of a long-haired student. Rokicki said he and the Administrative Committee considered the rules "reasonable" at the time, but expected they would be questioned by the community on their "reasonableness and appropriateness." He said he and his counselors could "live with" general rules, but would prefer more specific regulations within a generalized policy. "I will live with whatever you (the committee) resolve," Rokicki concluded. Gallup told the committee he feels students "do want limits" on what they can and can't do, and said he didn't consider the hair rules "that f ar out." Very few students have been involved in the hair dispute, he said. Each speaker was questioned by various committee members and the chairman, Prof. William J. Pierce, after giving his statement.