Christmas Guidelines Set By School Board 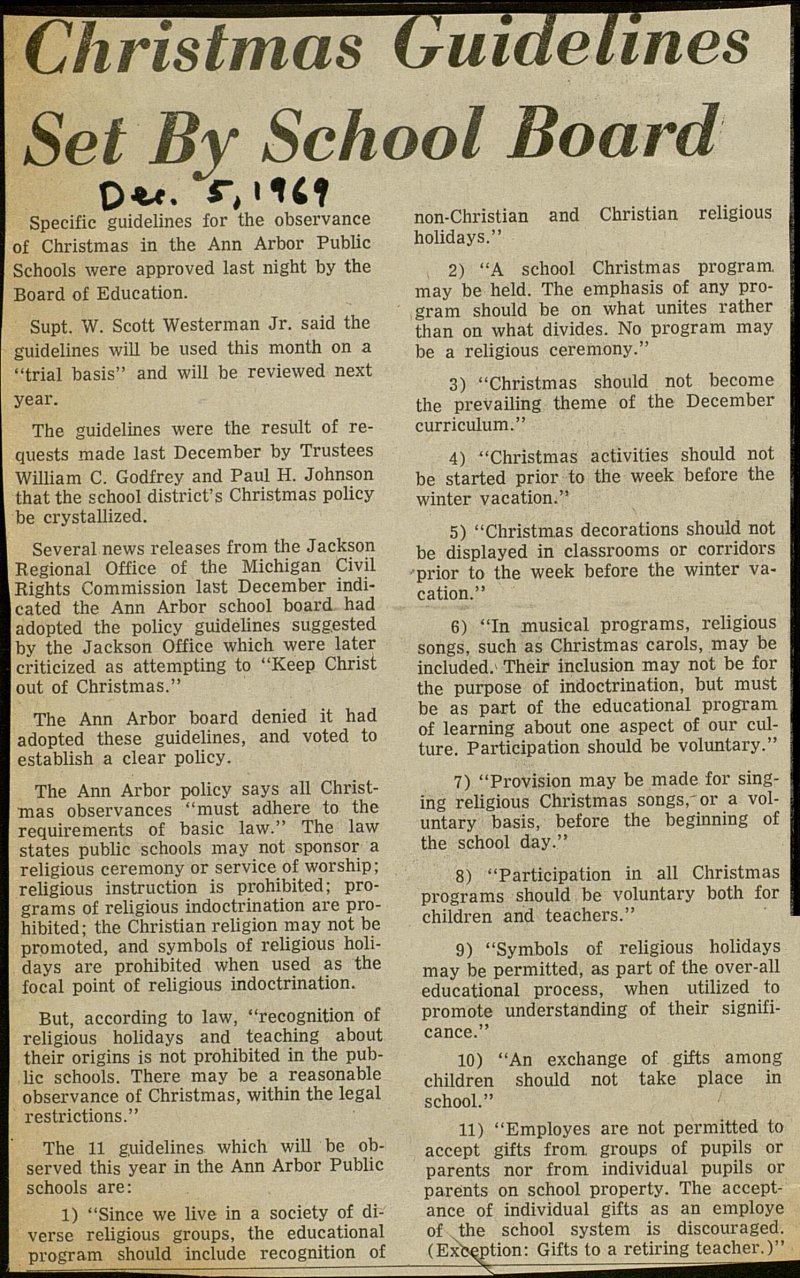 Specific guidelines for the observance of Christmas in the Ann Arbor Public Schools were approved last night by the Board of Education. Supt. W. Scott Westerman Jr. said the guidelines will be used this month on a "trial basis" and will be reviewed next year. The guidelines were the result of requests made last December by Trustees William C. Godfrey and Paul H. Johnson that the school district's Christmas policy be crystallized. Several news releases from the Jackson Regional Office of the Michigan Civil Rights Commission last December indicated the Ann Arbor school board had adopted the policy guidelines suggested by the Jackson Office which were later criticized as attempting to "Keep Christ out of Christmas." The Ann Arbor board denied it had adopted these guidelines, and voted to establish a clear policy. The Ann Arbor policy says all Christmas observances "must adhere to the requirements of basic law." The law states public schools may not sponsor a religious ceremony or service of worship; religious instruction is prohibited; programs of religious indoctrination are prohibited; the Christian religión may not be promoted, and symbols of religious holidays are prohibited when used as the focal point of religious indoctrination. But, according to law, "recognition of religious holidays and teaching about their origins is not prohibited in the public schools. There may be a reasonable observance of Christmas, within the legal restrictions." The 11 guidelines which will be observed this year in the Ann Arbor Public schools are: 1) "Since we live in a society of diverse religious groups, the educational program should include recognition of non-Christian and Christian religious holidays." 2) "A school Christmas program, may be held. The emphasis of any program should be on what unites rather than on what divides. No program may be a religious ceremony." 3) "Christmas should not become the prevailing theme of the December curriculum." 4) "Christmas activities should not be started prior to the week before the winter vacation." 5) "Christmas decorations should not be displayed in classrooms or corridors prior to the week before the winter vacation." 6) "In musical programs, religious songs, such as Christmas carols, may be included Their inclusión may not be for the purpose of indoctrination, but must be as part of the educational program of learning about one aspect of our culture. Participation should be voluntary." 7) "Provisión may be made for singing religious Christmas songs,' or a voluntary basis, before the beginning of the school day." 8) "Participation in all Christmas programs should be voluntary both for children and teachers." 9) "Symbols of religious holidays may be permitted, as part of the over-all educational process, when utilized to promote understanding of their significance." 10) "An exchange of gifts among children should not take place in school." 11) "Employés are not permitted to accept gifts from, groups of pupils or parents nor from individual pupils or pa.rents on school property. The acceptance of individual gifts as an employé of the school system is discouraged. (Exbeption: Gifts to a retiring teacher.)"