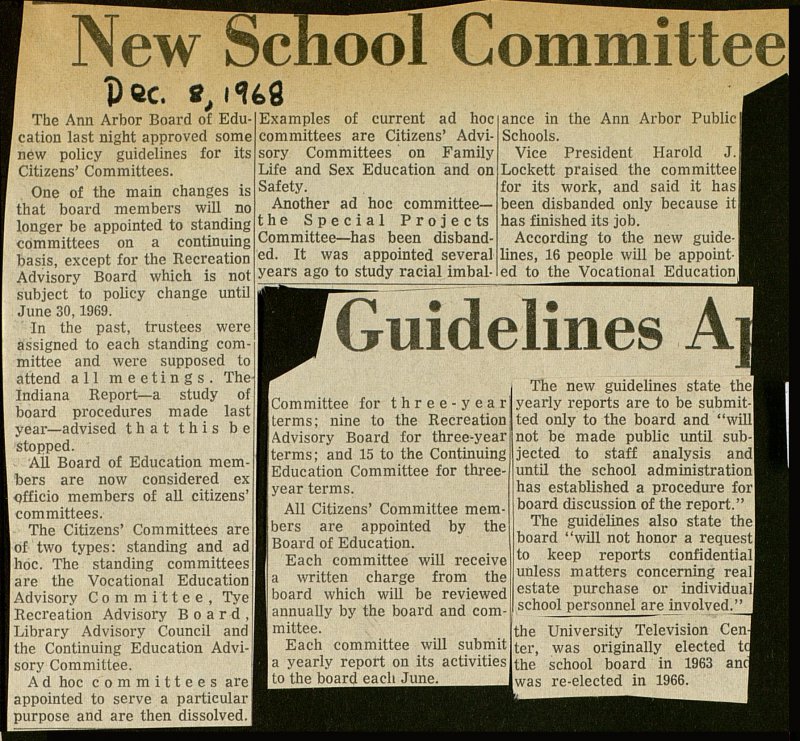 I The Ann Arbor Board of EduI catión last night approved some I new policy guidelines for its Citizens' Committees. One of the main changes is that board members will no longer be appointed to standing committees on a continuing basis, except for the Recreation Advisory Board which is not subject to policy change until June 30, 1969. In the past, trustees were assigned to each standing committee and were supposed to attend all meetings. The Indiana Report- a study of board procedures made last year- advised that this be stopped. All Board of Education members are now considered ex )fficio members of all citizens' committees. The Citizens' Committees are of two types: standing and ad hóe. The standing committees are the Vocational Education Advisory Committee, Tye Recreation Advisory Board, Library Advisory Council and the Continuing Education Advi-I sory Committee. A d hoc committees are I appointed to serve a particular! purpose and are then dissolved. I Examples of current ad hoc committees are Citizens' Advisory Committees on Family Life and Sex Education and on Safety. Another ad hoc committee- the Special Projects Committee- has been disbanded. It was appointed severa! years ago to study racial anee in the Ann Arbor Public] Schools. Vice President Harold J. Lockett praised the committee for its work, and said it has been disbanded only because itl has finished its job. According to the new guidelines, 16 people will be appoint ed to the Vocatlonal Educationl Committee for three-year terms; nine to the Recreation Advisory Board for three-year terms; and 15 to the Continuing Education Committee for threeyear terms. All Citizens' Committee members are appointed by the Board of Education. Each committee will receive a written charge from the board which will be reviewed annually by the board and committee. Each committee will submit a yearly report on its activities to the board each June. The new guidelines state the yearly reports are to be submit-l ted only to the board and "will not be made public untE subjected to staff analysis and until the school administration has established a procedure for board discussion of the report." The guidelines also state the board "will not honor a request to keep reports confidential unless matters concerning real estáte purchase or individual school personnel are involvedJ the University Televisión CenJ ter, was originally elected ta the school board in 1963 ancl was re-elected in 1966. I ■