Board Of Education Briefs 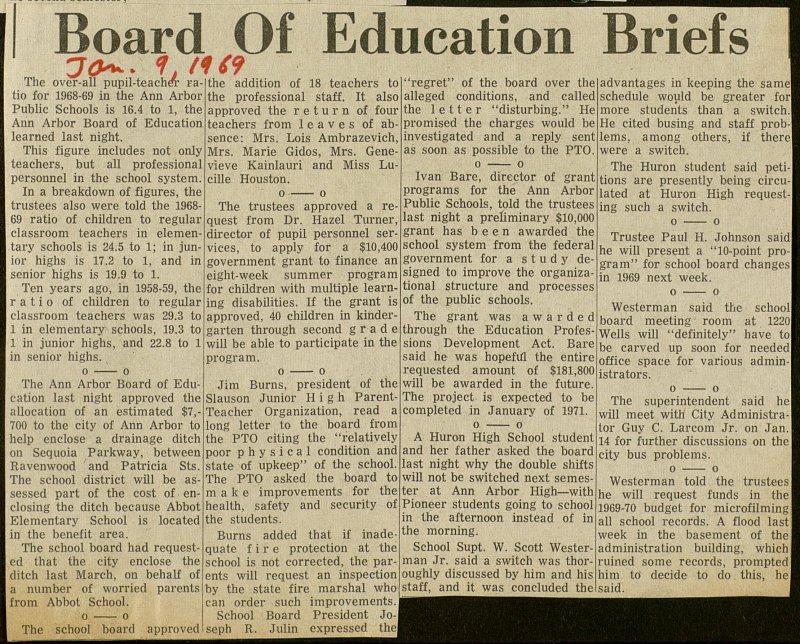 The over-all pupil-teacher ratio for 1968-69 in the Ann Arbor Public Schools is 16.4 to 1, the Ann Arbor Board of Education learned last night. This figure includes not only teachers, but all professional personnel in the school system. In a breakdown of figures, the trustees also were told the 196869 ratio of children to regular classroom teachers in elementary schools is 24.5 to 1; in junior highs is 17.2 to 1, and in senior highs is 19.9 to 1. Ten years ago, in 1958-59, the ratio of children to regular classroom teachers was 29.3 to 1 in elementary schools, 19.3 to 1 in junior highs, and 22.8 to 1 in senior highs. o o The Ann Arbor Board of Education last night approved the allocation of an estimated $7,700 to the city of Ann Arbor to help endose a drainage ditch on Sequoia Parkway, between Ravenwood 'and Patricia Sts. The school district will be assessed part of the cost of enclosing the ditch because Abbot Elementary School is located in the benefit area. The school board had requestcd that the city enclose the ditch last March, on behalf of a number of worried parents from Abbot School, o o The school board approved the addition of 18 teachers to the professional staff. It also approved the return of four teachers from 1 e a v e s of absence: Mrs. Lois Ambrazevich, Mrs. Marie Gidos, Mrs. Genevieve Kainlauri and Miss Lucille Houston. o o The trustees approved a request from Dr. Hazel Turner, director of pupil personnel services, to apply for a $10,400 government grant to finance an eight-week summer program for children with multiple learning disabilities. If the grant is approved, 40 children in kindergarten through second grade will be able to particípate in the program. o o Jim Burns, president of the Slauson Junior High ParentTeacher Organization, read a long letter to the board from the PTO citing the "relatively poor p h y s i c a 1 condition and state of upkeep" of the school. The PTO asked the board to m a k e improvements for the health, safety and security of the students. Burns added that if inadequate f i r e protection at the school is not corrected, the parents will request an inspection by the state fire marshal who can order such improvements. j School Board President Jo-I seph R. Julin expressed thej "regret" of the board over the alleged conditions, and called the letter "disturbing." He promised the charges would be investigated and a reply sent as soon as possible to the PTO. o o Ivan Bare, director of grant programs for the Ann Arbor Public Schools, told the trustees last night a preliminary $10,000 grant has been awarded the school system from the federal government for a s t u d y designed to improve the organizational structure and processes of the public schools. The grant was awarded through the Education Professions Development Act. Bare said he was hopeful the entire requested amount of $181,800 will be awarded in the future. The project is expected to be completed in January of 1971. o o A Hurón High School student and her father asked the board last night why the doublé shifts will not be switched next semester at Ann Arbor High- with Pioneer students going to school in the afternoon instead of in the morning. School Supt. W. Scott Westerman Jr. said a switch was thoroughly discussed by him and his staff, and it was concluded the advantages in keeping the same schedule would be greater for more students than a switch. He cited busing and staff problems, among others, if there were a switch. The Huron student said petitions are presently being circu-l Iated at Huron High requesting such a switch, o o Trustee Paul H. Johnson said he will present a "10-point program" for school board changes in 1969 next week. o o Westerman said the school board meeting room at 1220 Wells will "definitely" have to be carved up soon for needed office space for various administrators. o o The superintendent said he will meet with City Administrator Guy C. Larcom Jr. on Jan. 14 for further discussions on the city bus problems. o o Westerman told the trustees he will request funds in the 1969-70 budget for microfilming all school records. A flood last week in the basement of the administration building, which ruined some records, prompted liim to decide to do this, hel said. I