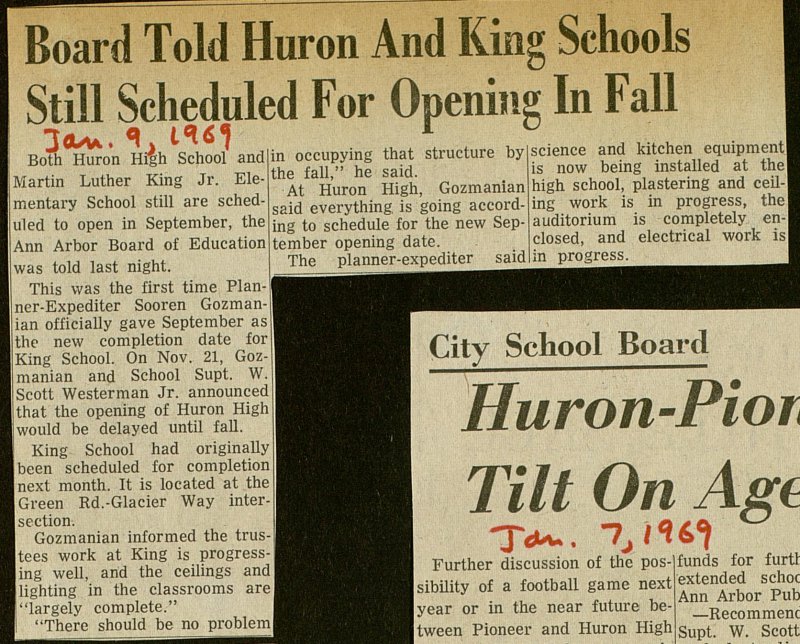 Both Hurón Hifh School and Martin Luther King Jr. Elementary School still are scheduled to open in September, the Ann Arbor Board of Education was told last night. This was the first time Planner-Expediter Sooren Gozmanian officially gave September as the new completion date for King School. On Nov. 21, Gozmanian and School Supt. W. IScott Westerman Jr. announced Ithat the opening of Huron High would be delayed until f all. King School had originally been scheduled for completion next month. It is located at the Green Rd.-Glacier Way intersection. Gozmanian informed the trustees work at King is progressing well, and the ceilings and Ilighting in the classrooms are "largely complete." "There should be no problem in occupying that structure by the f all," he said. At Huron High, Gozmanian said everything is going according to schedule for the new September opening date. The planner-expediter said science and kitchen equipmentl is now being installed at thel high school, plastering and ceiling work is in progress, the auditorium is completely enclosed, and electrical work is in progress.