Salvo Of Bus Complaints Aimed At School Board 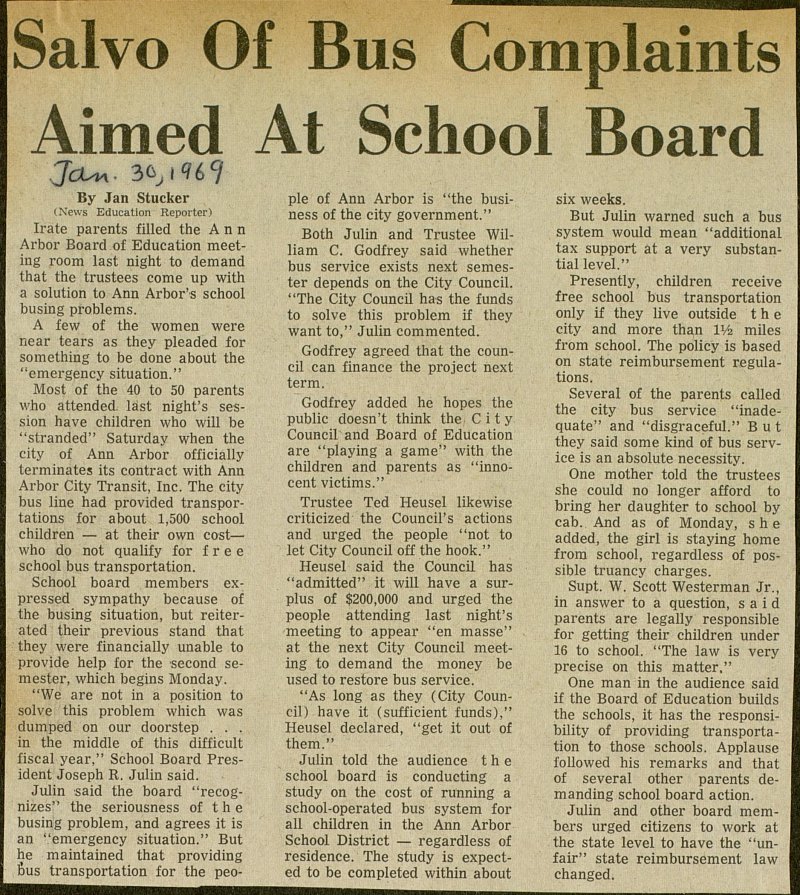 Irate parents filled the Ann Arbor Board of Education meeting room last night to demand that the trustees come up with a solution to Ann Arbor's school busing problems. A few of the women were near tears as they pleaded for something to be done about the "emergency situation." Most of the 40 to 50 parents who attended. lást night's session have children who will be "stranded" Saturday when the city of Ann Arbor officially terminates its contract with Ann Arbor City Transit, Inc. The city bus line had provided transportations for about 1,500 school children - at their own cost - who do not qualify for f r e e school bus transportation. School board members expressed sympathy because of the busing situation, but reiterated their previous stand that they were financially unable to provide help for the second semester, which begins Monday. "We are not in a position to solve this problem which was dumped on our doorstep . . . in the middle of this difficult fiscal year," School Board President Joseph R. Julin said. Julin said the board "recognizes" the seriousness of t h e busing problem, and agrees it is an "emergency situation." But he maintained that providing dus transportation for the pie of Ann Arbor is "the business of the city government." Both Julin and Trustee William C. Godfrey said whether bus service exists next semester depends on the City Council. "The City Council has the funds to solve this problem if they want to," Julin commented. Godfrey agreed that the council can finance the project next term. Godfrey added he hopes the public doesn't think the C i t y Council and Board of Education are "playing a game" with the children and parents as "innocent victims." Trustee Ted Heusel likewise criticized the Council's actions and urged the people "not to let City Council off the hook." Heusel said the Council has "admitted" it will have a surplus of $200,000 and urged the people attending last night's meeting to appear "en masse" at the next City Council meeting to demand the money be used to restore bus service. "As long as they (City Council) have it (sufficient funds)," Heusel declared, "get it out of them." Julin told the audience the school board is conducting a study on the cost of running a school-operated bus system for all children in the Ann Arbor School District - regardless of residence. The study is expected to be completed within about six weeks. But Julin warned such a bus system would mean "additional tax support at a very substantial Ie vel." Presently, children receive free school bus transportation only if they live outside the city and more than V-h miles from school. The policy is based on state reimbursement regulations. Several of the parents called the city bus service "inadequate" and "disgraceful." But they said some kind of bus service is an absolute necessity. One mother told the trustees she could no longer afford to bring her daughter to school by cab. And as of Monday, she added, the girl is staying home from school, regardless of possible truancy charges. Supt. W. Scott Westerman Jr., in answer to a question, said parents are legally responsible for getting their children under 16 to school. "The law is very precise on this matter," One man in the audience said if the Board of Education builds the schools, it has the responsibility of providing transportation to those schools. Applause followed his remarks and that of several other parents demanding school board action. Julin and other board members urged citizens to work at the state level to have the "unfair" state reimbursement law changed.