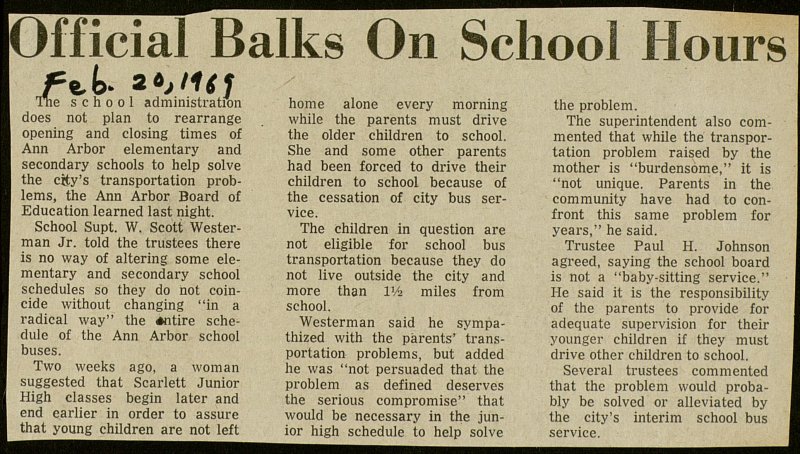 The school administration does not plan to rearrange opening and closing times of Ann Arbor elementary and secondary schools to help solve the city's transportation problems, the Ann Arbor Board of Education learned last night. School Supt. W. Scott Westerman Jr. told the trustees there is no way of altering some elementary and secondary school schedules so they do not coincide without changing "in a radical way" the éntire schedule of the Ann Arbor school buses. Two weeks ago, a woman suggested that Scarlett Junior High classes begin later and end earlier in order to assure that young children are not left home alone every morning while the parents must drive the older children to school. She and some other parents had been forced to drive their children to school because of the cessation of city bus service. The children in question are not eligible for school bus transportaron because they do not live outside the city and more than 1% miles from school. Westerman said he sympathized with the parents' transportation problems, but added he was "not persuaded that the problem as defined deserves the serious compromise" that would be necessary in the junior high schedule to help solve the problem. The superintendent also commented that while the transportation problem raised by the mother is "burdensome," it is "not unique. Parents in the community have had to confront this same problem for years," he said. Trustee Paul H. Johnson agreed, saying the school board is not a "baby-sitting service." He said it is the responsibility of the parents to provide for adequate supervisión for their younger children if they must drive other children to school. Several trustees commented that the problem would probably be solved or alleviated by the city's interim school bus service.