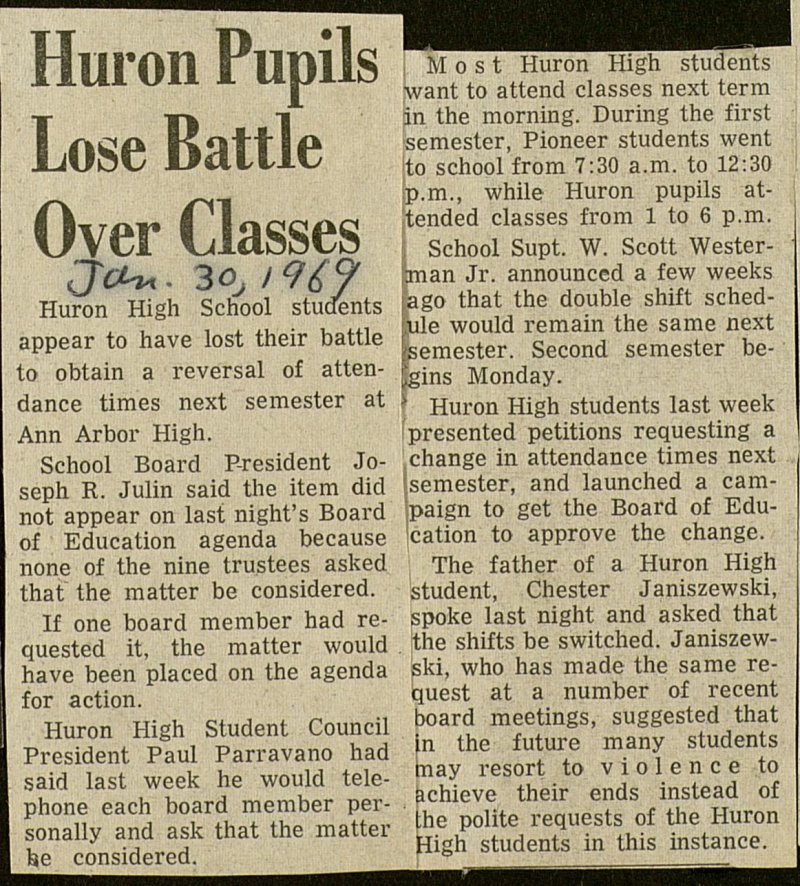 Hurón High School studénts appear to have lost their battle to obtain a revers al of attendance times next semester at Ann Arbor High. School Board President Joseph R. Julin said the item did not appear on last night's Board of Education agenda because none of the nine trustees asked thaf the matter be considered. If one board member had requested it, the matter would have been placed on the agenda for action. Huron High Student Council President Paul Parravano had said last week he would telephone each board member personally and ask that the matter be considered. Most Huron High students want to attend classes next term in the morning. During the first semester, Pioneer students went to school from 7:30 a.m. to 12:30 p.m., while Huron pupils attended classes from 1 to 6 p.m. School Supt. W. Scott Westerjman Jr. announccd a few weeks ago that the doublé shift schedJule would remain the same next semester. Second semester beigins Monday. ; Huron High students last week presented petitions requesting a change in attendance times next semester, and launched a camjpaign to get the Board of Edu'cation to approve the change. The father of a Huron High student, Chester Janiszewski, spoke last night and asked that the shifts be switched. Janiszewski, who has made the same request at a number of recent board meetings, suggested that in the future many students tnay resort to violence to ftchieve their ends instead of the polite requests of the Huron High students in this instance.