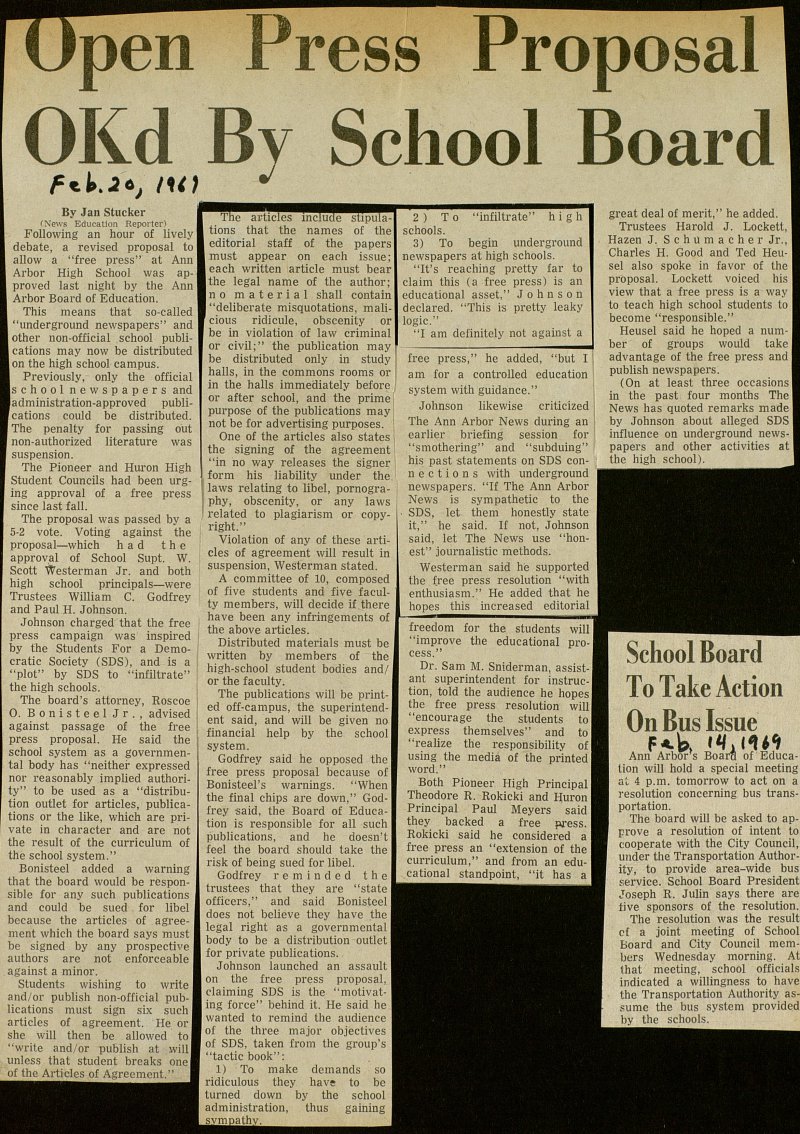 Following an hour of lively debate, a revised proposal to allow a "free press" at Ann Arbor High School was approved last night by the Ann Arbor Board of Education. This means that so-called "underground newspapers" and other non-official school publications may now be distributed on the high school campus. Previously, only the official school newspapers and ladministration-approved publications could be distributed. The penalty for passing out non-authorized literature was suspension. The Pioneer and Huron High Student Councils had been urging approval of a free press since last fall. The proposal was passed by a 5-2 vote. Voting against the proposal- which had the approval of School Supt. W. Scott Westerman Jr. and both high school principáis - were Trustees William C. Godfrey and Paul H. Johnson. Johnson charged that the free press campaign was inspired by the Students For a Democratie Society (SDS), and is a "plot" by SDS to "infíltrate" the high schools. The board's attorney, Roscoe O. BonisteelJr., advised against passage of the free press proposal. He said the school system as a governmental body has "neither expressed nor reasonably implied authority" to be used as a "distribution outlet for articles, publications or the like, which are private in character and are not the result of the curriculum of the school system." Bonisteel added a warning that the board would be rësponsible for any such publications and could be sued for libel because the articles of agreement which the board says must be signed by any prospective authors are not enforceable against a minor. Students wishing to write andor publish non-official publications must sign six such articles of agreement. He or she will then be allowed to "write andor publish at will unless that student breaks one of the Articles of Agreement." The articles include stipulations that the names of the editorial staff of the papers must appear on each issue; each written article must bear the legal name of the author; no material shall contain "delibérate misquotations, malicious ridicule, obscenity or be in violation of law criminal or civil;" the publication may be distributed only in study halls, in the commons rooms or in the halls immediately before or after school, and the prime purpose of the publications may not be for advertising purposes. One of the articles also states the signing of the agreement "in no way releases the signer form his liability under the laws relating to libel, pornography, obscenity, or any laws related to plagiarism or copyright." Violation of any of these articles of agreement will result in suspension, Westerman stated. A committee of 10, composed of five students and five faculty members, will decide if there have been any infringements of the above articles. Distributed materials must be written by members of the high-school student bodies and or the faculty. The publications will be printed off-campus, the superintendent said, and will be given no financial help by the school system. Godfrey said he opposed the free press proposal because of Bonisteel's warnings. "When the final chips are down," Godfrey said, the Board of Education is responsible for all such publications, and he doesn't feel the board should take the risk of being sued for libel. Godfrey reminded the trustees that they are "state I officers," and said Bonisteel I does not believe they have the I legal right as a governmental I body to be a distribution outlet I for private publications. Johnson launched an assault I on the free press proposal, I claiming SDS is the 1 ing force" behind it. He said he wanted to remind the audience of the three major objectives of SDS, taken from the group's "tactic book": 1) To make demands so ridiculous they havs to be turned down by the school administration, thus gaining svmpathv. 2 ) T o "infíltrate" high schools. 3) To begin underground newspapers at high schools. "It's reaching pretty far to claim this (a free press) is an educational asset," Johnson declared. "This is pretty leaky logic." "I am definitely not against a free press," he added, "but I am for a controlled education system with guidance." Johnson likewise criticized The Ann Arbor News during an earlier briefing session for "smothering" and "subduing" nis past statements on SDS conn e c t i o n s with underground newspapers. "If The Ann Arbor News is sympathetic to the ■ SDS, let them honestly state it," he said. If not, Johnson said, let The News use "honest" journalistic methods. Westerman said he supported the free press resolution "with enthusiasm." He added that he hopes this increased editorial freedom for the students will "improve the educational process." Dr. Sam M. Sniderman, assistant superintendent for instruction, told the audience he hopes the f ree press resolution willj "encourage the students to express themselves" and to "realize the responsibility of using the media of the printed word." Both Pioneer High Principal Theodore R. Rokicki and Huron Principal Paul Meyers said they backed a free press. Rokicki said he considered a free press an "extensión of the curriculum," and from an educational standpoint, "it has a great deal of merit," he adcled. f Trustees Harold J. Lockett, Hazen J. Schumacher Jr., Charles H. Good and Ted Heusel also spoke in favor of the proposal. Lockett voiced his view that a free press is a way to teach high school students to become "responsible." Heusel said he hoped a number of groups would take advantage of the free press and publish newspapers. (On at least three occasions in the past four months The News has quoted remarks made by Johnson about alleged SDS influence on underground newspapers and other activities at the high school).