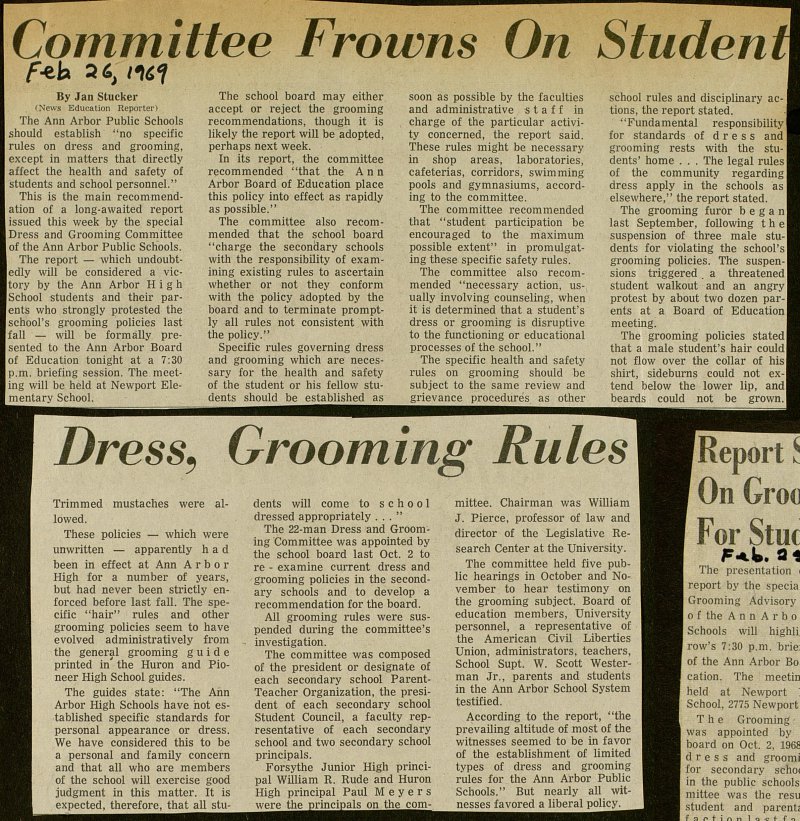 The Ann Arbor Public Schools should establish "no specific rules on dress and grooming, except in matters that directly affect the health and safety of students and school personnel." This is the main recommendation of a long-awaited report issued this week by the special Dress and Grooming Committee of the Ann Arbor Public Schools. The report - which undoubtedly will be considered a victory by the Ann Arbor High School students and their parents who strongly protested the school's grooming policies last fall - will be formálly presented to the Ann Arbor Board of Education tonight at a 7:30 p.m. briefing session. The meeting will be held at Newport Elementary School. - The school board may either accept or reject the grooming recommendations, though it is likely the report will be adopted, perhaps next week. In its report, the committee recommended "that the Ann Arbor Board of Education place this policy into effect as rapidly as possible." The committee also recommended that the school board "charge the secondary schools with the responsibility of examining existing rules to ascertain whether or not they conform with the policy adopted by the board and to termínate promptly all rules not consistent with the policy." Specific rules governing dress and grooming which are necessary for the health and safety of the student or his fellow students should be established as soon as possible by the faculties and administrative s t a f f in charge of the particular activity concerned, the report said. These rules might be necessary in shop areas, laboratories, cafeterías, corridors, swimming pools and gymnasiums, according to the committee. The committee recommended that "student participation be encouraged to the maximum possible extent" in promulgating these specific safety rules. The committee also recommended "necessary action, usually involving counseling, when it is determined that a student's dress or grooming is disruptive to the functioning or educational processes of the school." The specific health and safety rules on grooming should be subject to the same review and grievance procedures as other school rules and disciplinary actions, the report stated. I "Fundamental responsibility I for standards of d r e s s and grooming rests with the students' home . . . The legal rules of the community regardingl dress apply in the schools as elsewhere," the report stated. The grooming furor began last September, following the suspension of three male students for violating the school'sl grooming policies. The suspensions triggered , a threatened student walkout and an angry protest by about two dozen par-I ents at a Board of Education meeting. The grooming policies stated I that a male student's hair could I not flow over the collar of hisl shirt, sideburns could not ex-I tend below the lower lip, andl beards could not be grown.l Trimmed mustaches were allowed. These policies - which were unwritten - apparently had been in effect at Ann A r b o r High for a number of years, but had never been strictly enforced before last f all. The specific "hair" rules and other grooming policies seem to have evolved administratively from the general grooming g u i d e printed in' the Huron and Pioneer High School guides. The guides state: "The Ann Arbor High Schools have hot established specific standards for personal appearance or dress. We have considered this to be a personal and family concern and that all who are members of the school will exercise good judgment in this matter. It is expected, therefore, that all dents will come to school dressed appropriately ..." The 22-man Dress and Grooming Committee was appointed by the school board last Oct. 2 to re - examine current dress and grooming policies in the secondary schools and to develop a recommendation for the board. All grooming rules were suspended during the committee's investigation. The committee was composed of the president or designate of each secondary school ParentTeacher Organization, the president of each secondary school Student Council, a faculty representative of each secondary school and two secondary school principáis. Forsythe Junior High principal William R. Rude and Huron High principal Paul M e y e r s were the principáis on the mittee. Chairman was William J. Pierce, professor of law and director of the Legislative Research Center at the University. The committee held five public hearings in October and November to hear testimony on the grooming subject. Board of education members, University personnel, a representative of the American Civil Liberties Union, administrators, teachers, School Supt. W. Scott Westerman Jr., parents and students in the Ann Arbor School System testified. According to the report, "the prevailing altitude of most of the witnesses seemed to be in favor of the establishment of limited types of dress and grooming rules for the Ann Arbor Public Schools." But nearly all witnesses favored a liberal policy. --