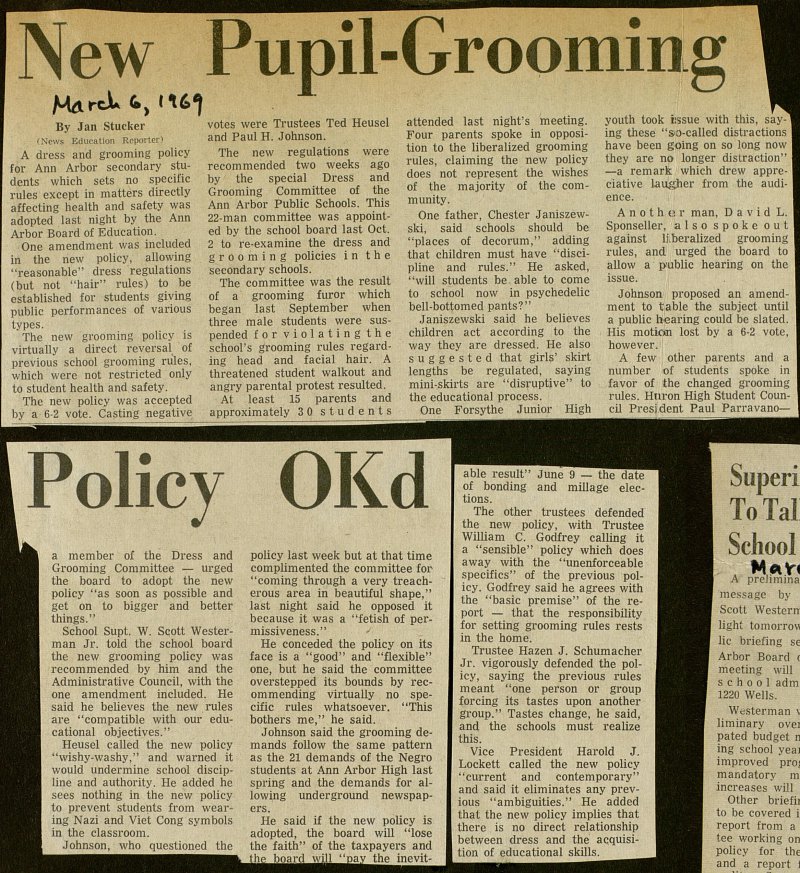 A dress and grooming policy for Ann Arbor secondary students which sets no specific rules except in matters directly affecting health and safety was adopted last night by the Ann Arbor Board of Education. One amendraent was included in the new policy, allowing "reasonable" dress regulations (but not "hair" rules) to be established for students giving public performances of various types. The new grooming policy is virtually a direct reversal of previous school grooming rules, which were not restricted only to student health and safety. The new policy was accepted by a 6-2 vote. Casting negative votes were Trustees Ted Heusel and Paul H. Johnson. The new regulations were recommended two weeks ago by the special Dress and Grooming Committee of the Ann Arbor Public Schools. This 22-man committee was appointed by the school board last Oct. 2 to re-examine the dress and grooming policies i n t h e secondary schools. The committee was the result of a grooming furor which began last September when three male students were suspended for violating the school's grooming rules regarding head and facial hair. A threatened student walkout and angry parental protest resulted. At least 15 parents and approximately 30 students attended last night's meeting. Four parents spoke in opposition to the liberalized grooming rules, claiming the new policy does not represent the wishes of the majority of the community. One father, Chester Janiszewski, said schools should be "places of decorum," adding that children must have "discipline and rules." He asked, "will students beable to come to school now in psychedelic bell-bottomed pants?" Janiszewski said he believes children act according to the way they are dressed. He also suggested that girls' skirt lengths be regulated, saying mini-skirts are "disruptive" to the educational process. One Forsythe Junior High youth took iissue with this, say-1 ing these "so-called distractions have been going on so long now they are no longer distraction" - a remark which drew appreciative laugjier from the audience. A n o t h q r man, David L. Sponseller, also spoke out against li.'beralized grooming rules, and urged the board to allow a public hearing on the issue. Johnson proposed an amendment to table the subject until a public hearing could be slated. His moticm lost by a 6-2 vote, however. A few other parents and a number of students spoke in favor of the changed grooming rules. Hurón High Student Council President Paul Parravano- a member of the Dress and Grooming Committee - urged the board to adopt the new policy "as soon as possible and get on to bigger and better things." School Supt. W. Scott Westerman Jr. told the school board the new grooming policy was recommended by him and the Administrative Council, with the one amendment included. He said he believes the new rules are "compatible with our educational objectives." Heusel called the new policy "vvishy-washy," and warned it would undermine school discipline and authority. He added he sees nothing in the new policy to prevent students from wearing Nazi and Viet Cong symbols in the classroom. Johnson, who questioned the policy last week but at that time complimented the committee for "coming through a very treacherous area in beautiful shape," last night said he opposed it because it was a "fetish of permissiveness." ' He conceded the policy on its face is a "good" and "flexible" one, but he said the committee overstepped its bounds by recommending virtually no specific rules whatsoever. "This bothers me," he said. Johnson said the grooming demands follow the same pattern as the 21 demands of the Negro students at Ann Arbor High last spring and the demands for allowing underground newspapers. He said if the new policy is adopted, the board will "lose the faith" of the taxpayers and the board will "pay the able result" June 9 - the date of bonding and millage elections. The other trustees defended the new policy, with Trustee William C. Godfrey calling it a "sensible" policy which does away with the "unenforceable specifics" of the previous policy. Godfrey said he agrees with the "basic premise" of the report - that the responsibility for setting grooming rules rests in the home. Trustee Hazen J. Schumacher Jr. vigorously defended the policy, saying the previous rules meant "one person or group forcing its tastes upon another group." Tastes change, he said, and the schools must realize this. Vice President Harold J. Lockett called the new policy "current and contemporary" and said it eliminates any previous "ambiguities." He added that the new policy implies that there is no direct relationship between dress and the acquisition of educational skills.