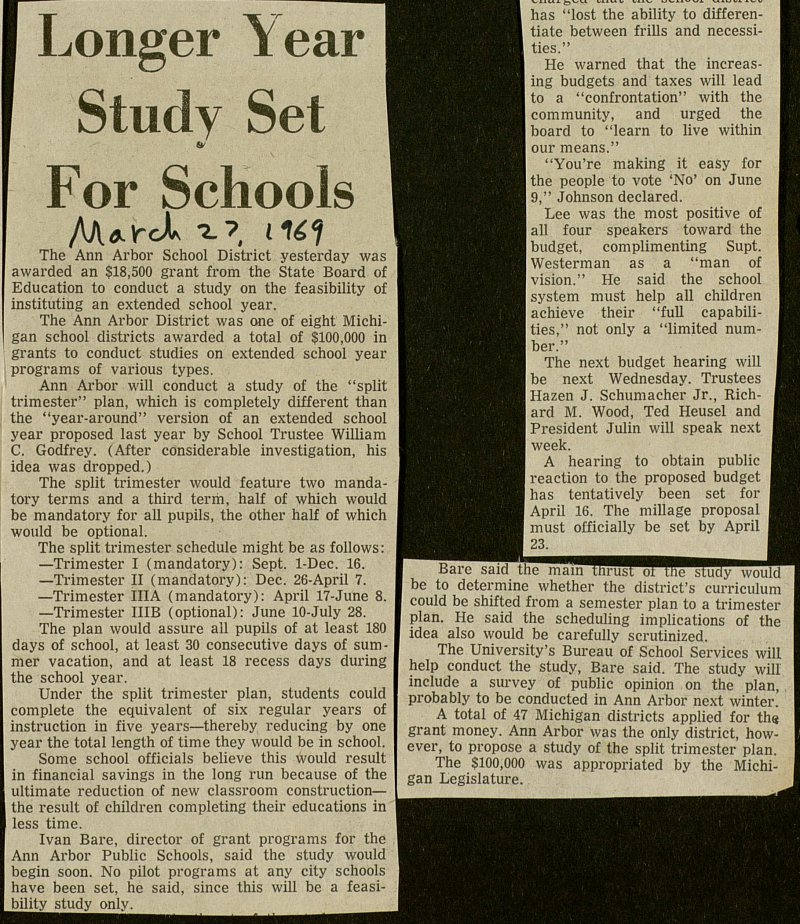 The Ann Arbor School District yesterday was warded an $18,500 grant from the State Board of Cducation to conduct a study on the feasibility of nstituting an extended school year. The Ann Arbor District was one of eight Michian school districts awarded a total of $100,000 in rants to conduct studies on extended school year programs of various types. Ann Arbor will conduct a study of the "split trimester" plan, which is completely different than the "year-around" version of an extended school year proposed last year by School Trustee William C. Godfrey. (After considerable investigation, his idea was dropped.) The split trimester would feature two mandatory terms and a third term, half of which would be mandatory for all pupils, the other half of which would be optional. The split trimester schedule might be as follows: -Trimester I (mandatory): Sept. 1-Dec. 16. -Trimester II (mandatory): Dec. 26-April 7. - Trimester UIA (mandatory): April 17-June 8. -Trimester IIIB (optional): June 10-July 28. The plan would assure all pupils of at least 180 days of school, at least 30 consecutive days of summer vacation, and at least 18 recess days during the school year. Under the split trimester plan, students could complete the equivalent of six regular years of instruction in five years- thereby reducing by one year the total length of time they would be in school. Some school officials believe this would result in financial savings in the long run because of the ultimate reduction of new classroom construction- the result of children completing their educations in less time. Ivan Bare, director of grant programs for the Ann Arbor Public Schools, said the study would begin soon. No pilot programs at any city schools have been set, he said, since this will be a feasibility study only. Bare said tne mam fnrusWRêstüaywóuicr be to determine whether the district's curriculum could be shifted from a semester plan to a trimester plan. He said the scheduling implications of the idea also would be carefully scrutinized. The University's Bureau of School Services wiU help conduct the study, Bare said. The study will include a survey of public opinión on the plan, probably to be conducted in Ann Arbor next winter. A total of 47 Michigan districts applied for ths grant money. Ann Arbor was the only district, however, to propose a study of the split trimester plan. The $100,000 was appropriated by the Michigan Legislature.