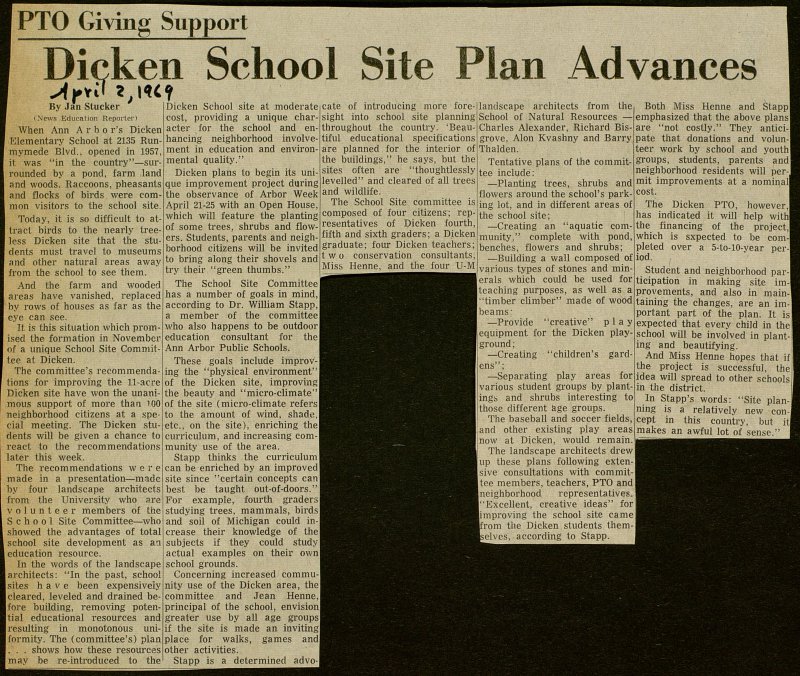 When Ann Arbo r's Dicken Elementary School at 2135 Runmymede Blvd., opened in 1957, it was "in the country"- surrounded by a pond, farm land and woods. Raccoons, pheasanls and flocks of birds were common visitors to the school site. Today, it is so difficult to attract birds to the nearly treeless Dicken site that the students must travel to museums and other natural áreas away from the school to see them. And the farm and wooded areas have vanished, replaced by rows of houses as far as the eye can see. It is this situation which promised the formation in November of a unique School Site Comniittee at Dicken. The committee's recommendations for improving the 11-acre Dicken site have won the unanimous support of more thati TOO neighborliood citizens at a special meeting. The Dicken students will be given a chance to react to the recommendations later this week. The recommendations were made in a presentation - made by four landscape architects from the University who are volunteer members of the School Site Committee- who showed the advantages of total school site development as an education resource. In the words of the landscape architects: "In the past, school sites have been expensiveiy cleared, leveled and drained before building, removing potential educational resources and resulting in monotonous uniformity. The (committee's) plan . . . shows how these resources may be re-introduced to the f Dicken School site at moderate cost, providing a unique character for the school and enhancing neighborhood involvement in education and environmental quality." Dicken plans to begin its unique improvement project during the observance of Arbor Week April 21-25 with an Open House, which will feature the planting of some trees, shrubs and flowers. Students, parents and neighborhood citizens will be invited to bring along their shovels and try their "green thumbs." The School Site Committeel has a number of goals in mind, according to Dr. William Stapp, I a member of the committeel who also happens to be outdoorl education consultant for thel Ann Arbor Public Schools. These goals include improv-l ing the "physical environment"! of the Dicken site, improvingj the beauty and "micro-climate"! of the site (micro-climate refersl to the amount of wind, shade.l etc, on the site), enriching thel curriculum, and increasing com-l munity use of the area. Stapp thinks the curriculum I can be enriched by an improvedl site since "certain concepts can best be taught out-of-doors." For example, fourth graders studying trees, mammals, birds and soil of Michigan could increase their knowledge of thel subjects if they could study actual examples on their own school grounds. Concerning increased community use of the Dicken area, the committee and Jean Henne, principal of the school, envision greater use by all age groups if the site is made an inviting place for walks, games andl other activities. Stapp is a determined advo-l cate of introducing more foresight into school site planning throughout the country. 'Beautiful educational specifications are planned for the interior of the buildings," he says, but the sites often are "thoughtlessly levelled" and cleared of all trees and wildlife. The School Site committee is composed of four citizens; representatives of Dicken fourth, fifth and sixth graders ; a Dicken gradúate; four Dicken teachers; t w o conservation consultants, Miss Henne, and the four U-M landscape architects from the School of Natural Resources - Charles Alexander, Richard Bisgrove, Alon Kvashny and Barry Thalden. Tentative plans of the committee include: - Planting trees, shrubs and flowers around the school' s parking lot, and in different areas of the school site; - Creating an "aquatic commuriity," complete with pond, benches, flowers and shrubs; - Building a wall composed of various types of stones and minerals which could be used for teaching purposes, as well as a "timber climber" made of wood beams; - Provide "creative" p 1 a y equipment for the Dicken playground; -Creating "children's gardens"; - Separating play areas for various student groups by plantings and shrubs interesting to those different age groups. The baseball and soccer fields, and other existing play areas now at Dicken, would remain. The landscape architects drew up these plans folio wing extensive consultations with committce members, teachers, PTO andj Ineighborhood representatives.i "Excellent, creative ideas" for improving the school site carne Ifrom the Dicken students themelves, according to Stapp. I Both Miss Henne and Stappl emphasized that the above plansl are "not costly." They antici-l pate that donations and volun-l teer work by school and youthl groups, students, parents andl neighborhood residents will per-J mit improvements at a nominal! cost. The Dicken PTO, howeverj has indicated it will help withl the financing of the project,! which is sxpected to be com-l pleted over a 5-to-10-year per-l iod. Student and neighborhood par-I ticipation in making site im-l provements, and also in main- taining the changes, are an im-J portant part of the plan. It is I expected that every child in thej school will be involved in i ing and beautifying. And Miss Henne hopes that if the project is successful, the idea will spread to other schools in the district. In Stapp's words: "Site plan-ï ning is a relatively new con-l cept in this country, but itl makes an awful lot of sense." , M