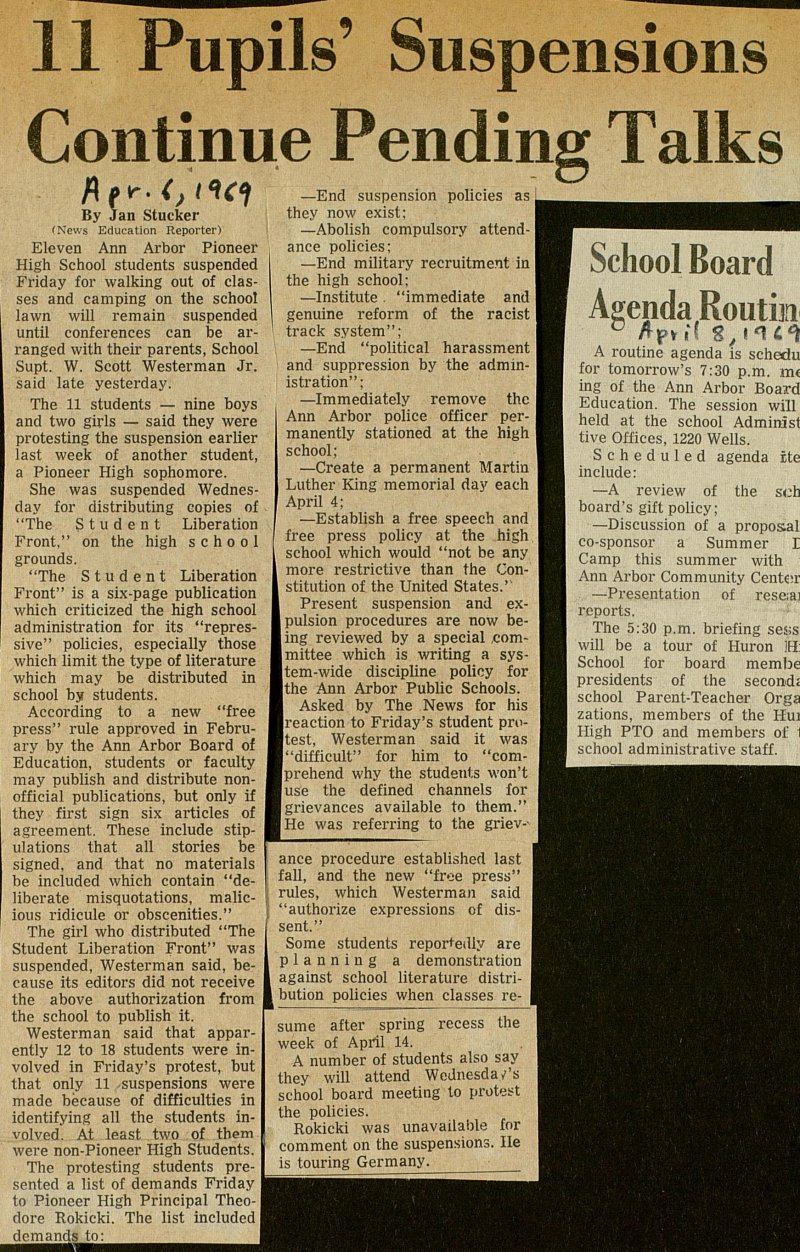 Eleven Ann Arbor Pioneer High School students suspended Friday for walking out of classes and camping on the school lawn will remain suspended until conferences can be arranged with their parents, School Supt. W. Scott Westerman Jr. said late yesterday. The 11 students - nine boys and two girls - said they were protesting the suspension earlier last week of another student, a Pioneer High sophomore. She was suspended Wednesday for distributing copies of "The Student Liberation Front," on the high school grounds. "The Student Liberation Front" is a six-page publication which criticized the high school administration for its "repressive" policies, especially those which limit the type of literature which may be distributed in school by students. According to a new "free press" rule approved in February by the Ann Arbor Board of Education, students or faculty may publish and distribute nonofficial publications, but only if they first sign six articles of agreement. These include stipulations that all stories be signed, and that no materials be included which contain "delibérate misquotations, malicious ridicule or obscenities." The girl who distributed "The Student Liberation Front" was suspended, Westerman said, because its editors did not receive the above authorization from I the school to publish it. Westerman said that apparently 12 to 18 students were involved in Friday's protest, but that only 11 suspensions were made bècause of difficulties in identifying all the students involved. At least two of them were non-Pioneer High Students. The protesting students presented a list of demands Friday to Pioneer High Principal 1 dore Rokicki. The list included I demands to: I - End suspension policies as they now exist; - Abolish compulsory attendance policies; - End military recruitment in the high school; - Institute . "immediate and genuine reform of the racist track system"; -End "political harassment and suppression by the administration"; - Immediately remove the Ann Arbor pólice officer permanently stationed at the high school; - Créate a permanent Martin Luther King memorial day each April 4; - Establish a free speech and free press policy at the high school which would "not be any more restrictive than the Constitution of the United States.' Present suspension and expulsion procedures are now being reviewed by a special ,committee which is writing a system-wide discipline policy for the Ann Arbor Public Schools. Asked by The News for his reaction to Friday's student protest, Westerman said it was "difficult" for him to "comprehend why the students won't use the defined channels for grievances available to them." He was referring to the griev-anee procedure established last fall, and the new ''free press" rules, which Westerman said "authorize expressions of dissent." Some students reporteril; are planning a demonstration against school literature distribution policies when classes sume after spring recess the week of April 14. A number of students also say they will attend Wednesday's school board meeting to protest the policies. Rokicki was unavailable for comment on the suspensions. Ile is touring Germany.