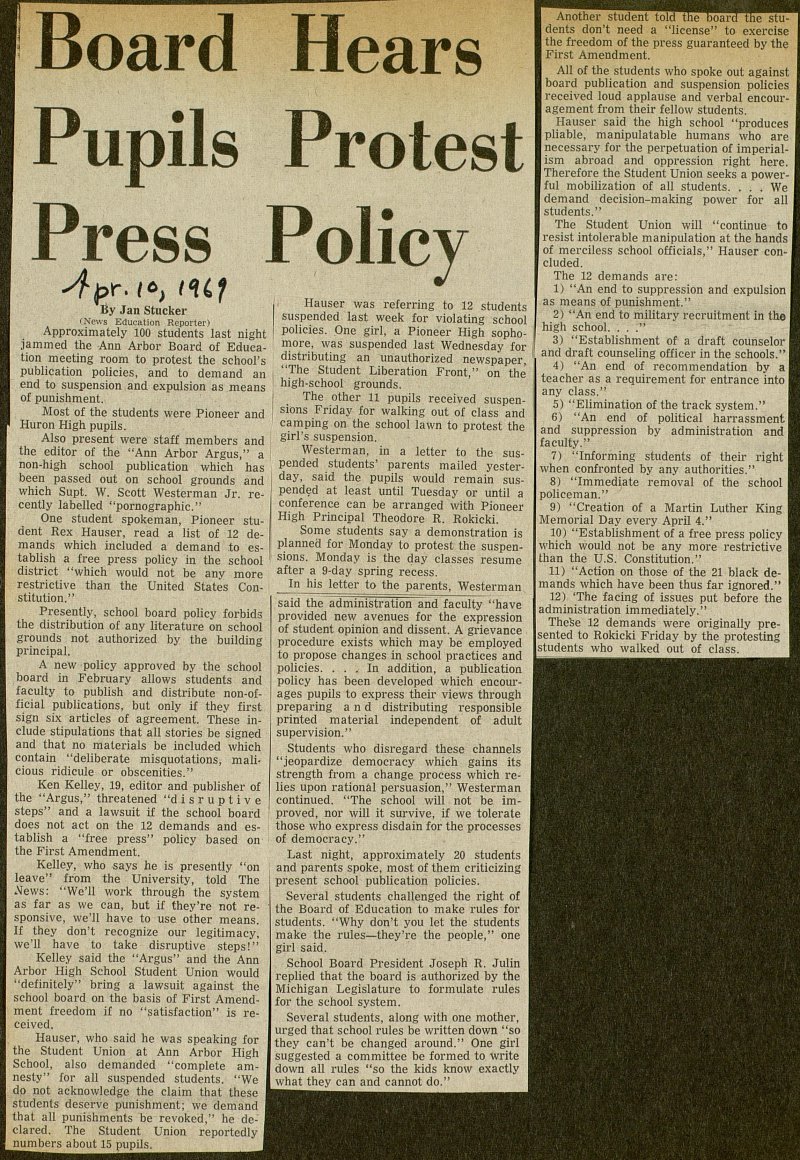 Approximately 100 students last night jammed the Ann Arbor Board of Education meeting room to protest the school's publication policies, and to demand an end to suspension and expulsión as means of punishment. Most of the students were Pioneer and Huron High pupils. Also present were staff members and the editor of the "Ann Arbor Argus," a non-high school publication which has been passed out on school grounds and which Supt. W. Scott Westerman Jr. recently labelled "pornographic." One student spokeman, Pioneer student Rex Hauser, read a list of 12 demands which included a demand to establish a free press policy in the school district "which would not be any more restrictive than the United States Constitution." Presently, school board policy forbids the distribution of any literature on school grounds not authorized by the building principal. A new policy approved by the school board in February allows students and faculty to publish and distribute non-official publications, but only if they first sign six articles of agreement. These include stipulations that all stories be signed and that no materials be included which contain "delibérate misquotations, malicious ridicule or obscenities." Ken Kelley, 19, editor and publisher of the "Argus," threatened "disruptive steps" and a lawsuit if the school board does not act on the 12 demands and establish a "free press" policy based on the First Amendment. Kelley, who says he is presently "on leave" from the University, told The -Vews: "We'll work through the system as far as we can, but if they're not responsive, we'll have to use other means. If they don't recognize our legitimacy, we'll have to take disruptive steps!" Kelley said the "Argus" and the Ann Arbor High School Student Union would "definitely" bring a lawsuit against the school board on the basis of First Amendment freedom if no "satisfaction" is received. Hauser, who said he was speaking for the Student Union at Ann Arbor High School, also demanded "complete amnesty" for all suspended students. "We I do not acknowledge the claim that these students deserve punishment; we demand that all punishments be revoked," he I clared. The Student Union reportedly I numbers about 15 pupils. I Hauser was referring to 12 students suspended last week for violating school policies. One girl, a Pioneer High sophomore, was suspended last Wednesday for distributing an unauthorized newspaper, "The Student Liberation Front," on the' high-school grounds. The other 11 pupils received suspensions Friday for walking out of class and camping on the school lawn to protest the girl's suspension. Westerman, in a letter to the suspended students' parents mailed yesterday, said the pupils would remain suspended at least until Tuesday or until a conference can be arranged with Pioneer High Principal Theodore R. Rokicki. Some students say a demonstration is planned for Monday to protest the suspensions. Monday is the day classes resume after a 9-day spring recess. In his letter to the parents, Westerman. said the administration and faculty "have provided new avenues for the expression of student opinión and dissent. A grievance procedure exists which may be employed to propose changes in school practices and policies. ... In addition, a publication policy has been developed which encourages pupils to express their views through preparing and distributing responsible printed material independent of adult supervisión." Students who disregard these channels "jeopardize democracy which gains its strength from a change process which relies upon rationál persuasión," Westerman continued. "The school will not be improved, nor will it survive, if we tolérate those who express disdain for the processes of democracy." Last night, approximately 20 students and parents spoke, most of them criticizing present school publication policies. Several students challenged the right of I the Board of Education to make rules for I students. "Why don't you let the students I make the rules- they're the people," one I girl said. School Board President Joseph R. Julin I replied that the board is authorized by the I Michigan Legislature to formúlate rules for the school system. Several students, along with one mother, I urged that school rules be written down "so I they can't be changed around." One girl I suggested a committee be formed to write I down all rules "so the kids know exactly I what they can and cannot do." Another student told the board the students don't need a "license" to exercise the freedom of the press guaranteed by the First Amendment. All of the students who spoke out against board publication and suspension policies received loud applause and verbal encouragement from their fellow students. Hauser said the high school "produces pliable, manipulatable humans who are necessary for the perpetuation of imperialism abroad and oppression right here. Therefore the Student Union seeks a powerful mobilization of all students. . . . We demand decision-making power for all students." The Student Union will "continue to resist intolerable manipulation at the hands I of merciless school officials," Hauser concluded. The 12 demands are: 1) "An end to suppression and expulsión as means of punishment." 2) "An end to military recruitment in the high school. ..." 3) "Establishment of a draft counselor and draft counseling officer in the schools." I 4) "An end of recommendation by al teacher as a requirement for entrance into I any class." 5) "Elimination of the track system." 6) "An end of political harrassmentl and suppression by administraron and I faculty." 7) "Informing students of their right I vvhen confronted by any authorities." 8) "Immediate removal of the school I policeman." 9) "Creation of a Martin Luther King I Memorial Day every April 4." 10) "Establishment of a free press policy I which would not be any more restrictive I than the U.S. Constitution." 11) "Action on those of the 21 black I mands which have been thus far ignored." I 12) 'The facing of issues put before the administration immediately." These 12 demands were originally presented to Rokicki Friday by the protesting students who walked out of class.