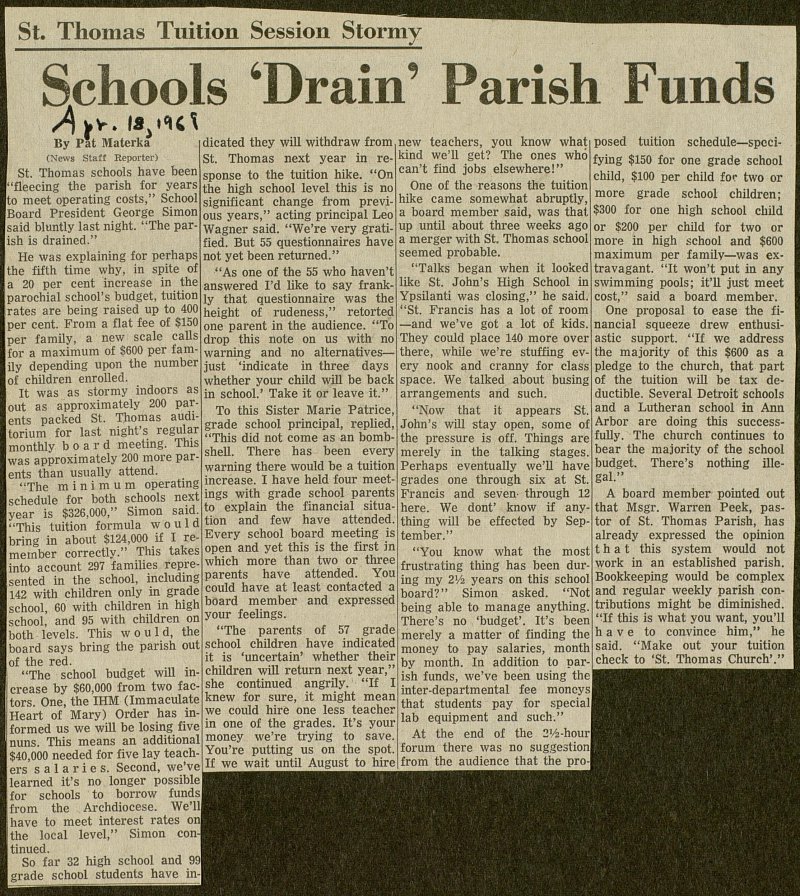 St. Thomas schools have been "fleecing the parish for years to meet operating costs," School Board President George Simon said bluntly last night. "The parish is drained." He was explaining for perhaps the fifth time why, in spite of a 20 per cent increase in the parochial school's budget, tuition rates are being raised up to 400 per cent. From a flat fee of $150 per family, a new scale calls for a maximum of $600 per family depending upon the number of children enrolled. It was as stormy indoors as out as approximately 200 parents packed St. Thomas auditorium for last night's regular monthly board meeting. This was approximately 200 more parents than usually attend. "The minimum operating schedule for both schools next year is $326,000," Simon said. "This tuition formula would bring in about $124,000 if I remember correctly." This takes into account 297 families represented in the school, including 142 with children only in grade school, 60 with children in high school, and 95 with children on both levéis. This would, the board says bring the parish out of the red. "The school budget will increase by $60,000 from two factors. One, the IHM (Immaculate Heart of Mary) Order has informed us we will be losing five nuns. This means an additiona] $40,000 needed for five lay teachers salaries. Second, we've learned it's no longer possible for schools to borrow funds from the Archdiocese. We'U have to meet interest rates on the local level," Simon con-1 tinued. So far 32 high school and 99 grade school students have dicated they will withdraw from St. Thomas next year in response to the tuition hike. "On the high school level this is no significant change from previous years," acting principal Leo Wagner said. "We're very gratified. But 55 questionnaires have not yet been returned." "As one of the 55 who haven't answered I'd like to say frankly that questionnaire was the height of rudeness," retorted one parent in the audience. "To drop this note on us with no warning and no alternatives- just 'indicate in three days whether your child will be back in school.' Take it or leave it." To this Sister Marie Patrice, grade school principal, replied, "This did not come as an bombshell. There has been every warning there would be a tuition increase. I have held four meetings with grade school parents to explain the financial situation and few have attended. Every school board meeting is open and yet this is the first in which more than two or three parents have attended. You could have at least contacted a board member and expressed your feelings. "The parents of 57 grade school children have indicated it is 'uncertain' whether their children will return next year," she continued angrily. "ïf I knew for sure, it might mean we could hire one less teacher in one of the grades. It's your money we're trying to save. You're putting us on the spot. If we wait until August to hire new teachers, you know what kind we'll get? The ones whó can't find jobs elsewhere!" One of the reasons the tuition hike came somewhat abruptly, a board member said, was that up until about three weeks ago a merger with St. Thomas school seemed probable. "Talks began when it looked like St. John's High School in Ypsilanti was closing," he said. "St. Francis has a lot of room -and we've got a lot of kids. They could place 140 more over there, while we're stuffing every nook and cranny for class space. We talked about busing arrangements and such. "Now that it appears St. John's will stay open, some of the pressure is off. Things are merely in the talking stages. Perhaps eventually we'll have grades one through six at St. Francis and through 12 here. We dont' know if anything will be effected by September." "You know what the most frustrating thing has been during my 2V2 years on this school board?" Simon asked. "Not being able to manage anything. There's no 'budget'. It's been merely a matter of finding the money to pay salaries, month by month. In addition to parish funds, we've been using the inter-departmental fee moneys that students pay for special lab equipment and such." At the end of the 2V2-hour forum there was no suggestion from the audience that the posed tuition schedule- spccifying $150 for one grade school child, $100 per child foc two or more grade school children; $300 for one high school child or $200 per child for two or more in high school and $600 maximum per family- was extravagant. "It won't put in any swimming pools; it'll just meet cost," said a board member. One proposal to ease the financial squeeze drew enthusiastic support. "If we address the majority of this $600 as a pledge to the church, that part of the tuition will be tax deductible. Several Detroit schools and a Lutheran school in Ann Arbor are doing this successfully. The church continues to bear the majority of the school budget. There's nothing illegal." A board member pointed out that Msgr. Warren Peek, pastor of St. Thomas Parish, has already expressed the opinion that this system would not work in an established parish. Bookkeeping would be complex and regular weekly parish contributions might be diminished. "if this is what you want, you'll have to convince him," he said. "Make out your tuition check to 'St. Thomas Church'."