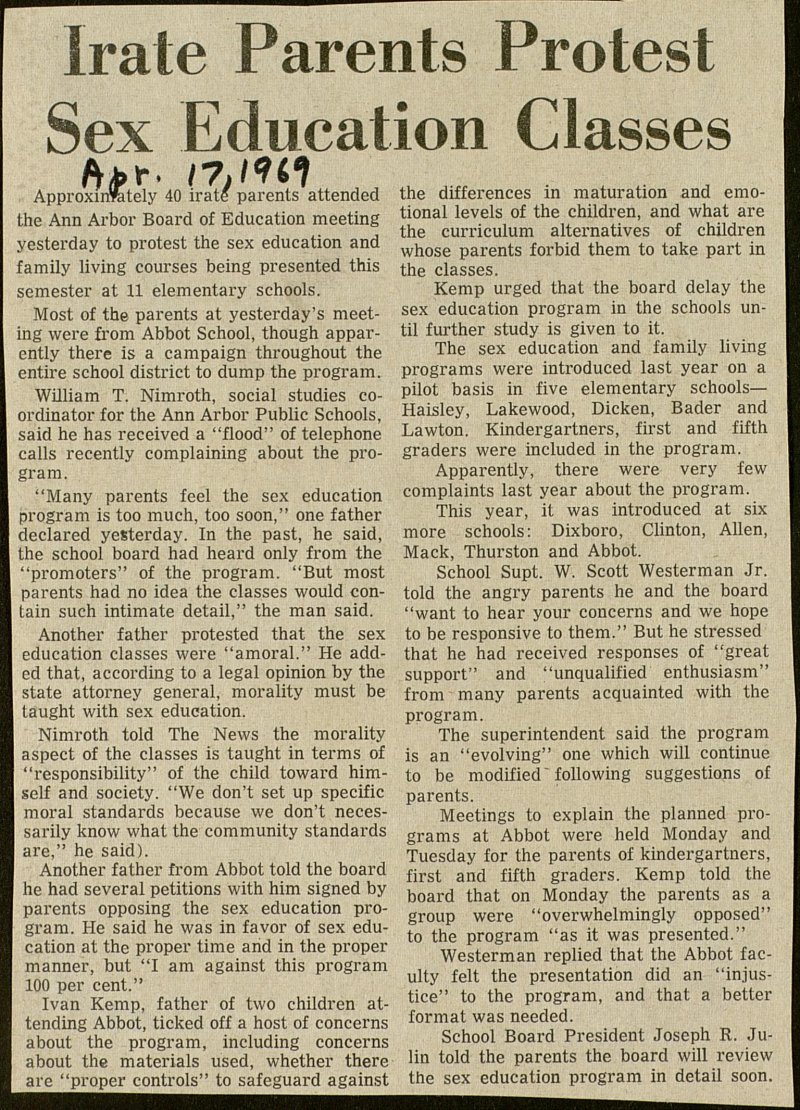 Approximately 40 irate parents attended the Ann Arbor Board of Education meeting yesterday to protest the sex education and family living courses being presented this semester at 11 elementary schools. Most of the parents at yesterday's meeting were from Abbot School, though apparently there is a campaign throughout the entire school district to dump the program. William T. Nimroth, social studies coördinator for the Ann Arbor Public Schools, said he has received a "flood" of telephone calls recently complaining about the program. "Many parents feel the sex education program is too much, too soon," one father declared yesterday. In the past, he said, the school board had heard only from the "promoters" of the program. "But most parents had no idea the classes would conI tain such intimate detail," the man said. Another father protested that the sex education classes were "amoral." He added that, according to a legal opinión by the state attorney general, morality must be taught with sex education. Nimroth told The News the morality aspect of the classes is taught in terms of "responsibility" of the child toward himself and society. "We don't set up specific I moral standards because we don't necesI sarily know what the community standards I are," he said). Another father from Abbot told the board he had several petitions with him signed by parents opposing the sex education program. He said he was in favor of sex education at the proper time and in the proper manner, but "I am against this program 100 per cent." Ivan Kemp, father of two children attending Abbot, ticked off a host of concerns about the program, including concerns about the materials used, whether there are "proper controls" to safeguard against the differences in maturation and emotional levéis of the children, and what are the curriculum alternatives of children whose parents forbid them to take part in the classes. Kemp urged that the board delay the f sex education program in the schools ! til further study is given to it. The sex education and family living programs were introduced last year on a pilot basis in five elementary schools- Haisley, Lakewood, Dicken, Bader and Lawton. Kindergartners, first and fifth graders were included in the program. Apparently, there were very few complaints last year about the program. This year, it was introduced at six more schools: Dixboro, Clinton, Alien, Mack, Thurston and Abbot. School Supt. W. Scott Westerman Jr. told the angry parents he and the board "want to hear your concerns and we hope to be responsive to them." But he stressed that he had received responses of "great support" and "unqualified enthusiasm" from many parents acquainted with the program. The superintendent said the program is an "evolving" one which will continue to be modified" following suggestions of parents. Meetings to explain the planned programs at Abbot were held Monday and Tuesday for the parents of kindergartners, first and fifth graders. Kemp told the board that on Monday the parents as a group were "overwhelmingly opposed" to the program "as it was presented." Westerman replied that the Abbot faculty felt the presentation did an "injustice" to the program, and that a better format was needed. School Board President Joseph R. Julin told the parents the board will review the sex education program in detail soon.