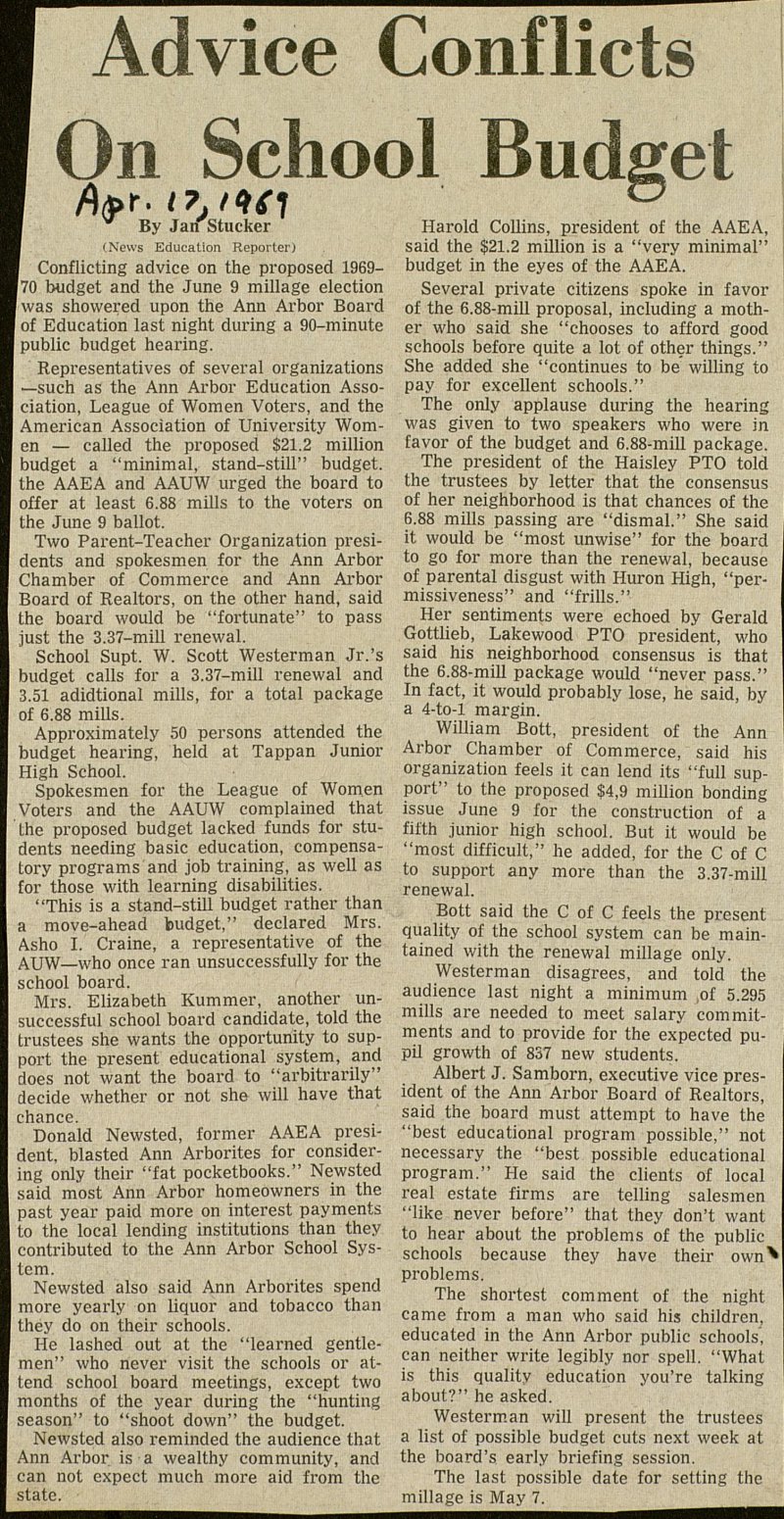 I Conflicting advice on the proposed 1969■70 budget and the June 9 millage election I was showered upon the Ann Arbor Board I of Education last night during a 90-minute I public budget hearing. Representatives of several organizations - such as the Ann Arbor Education Association, League of Women Voters, and the American Association of University Women - called the proposed $21.2 million budget a "minimal, stand-still" budget, the AAEA and AAUW urged the board to offer at least 6.88 milis to the voters on the June 9 ballot. Two Parent-Teacher Organization presidents and spokesmen for the Ann Arbor Chamber of Commerce and Ann Arbor Board of Realtors, on the other hand, said the board would be "fortúnate" to pass just the 3.37-mill renewal. School Supt. W. Scott Westerman Jr.'s budget calis for a 3.37-mill renewal and 3.51 adidtional milis, for a total package of 6.88 milis. Approximately 50 persons attended the budget hearing, held at Tappan Junior High School. Spokesmen for the League of Women Voters and the AAUW complained that the proposed budget lacked funds for students needing basic education, compensatory programs and job training, as well as for those with learning disabilities. "This is a stand-still budget rather than a move-ahead budget," declared Mrs. Asho I. Craine, a representative of the AUW- who once ran unsuccessfully for the school board. Mrs. Elizabeth Kummer, another unsuccessful school board candidate, told the trustees she wants the opportunity to support the present educational system, and does not want the board to "arbitrarily" decide whether or not she will have that chance. Donald Newsted, former AAEA president, blasted Ann Arborites for considering only their "fat pocketbooks." Newsted said most Ann Arbor homeowners in the past year paid more on interest payments to the local lending institutions than they contributed to the Ann Arbor School System. Newsted also said Ann Arborites spend more yearly on liquor and tobáceo than they do on their schools. He lashed out at the "learned gentlemen" who never visit the schools or attend school board meetings, except two months of the year during the "hunting season" to "shoot down" the budget. Newsted also reminded the audience that Ann Arbor is a wealthy community, and can not expect much more aid from the state. Harold Collins, president of the AAEA, said the $21.2 million is a "very minimal" budget in the eyes of the AAEA. Several private citizens spoke in favor of the 6.88-mill proposal, including a mother who said she "chooses to afford good schools bef ore quite a lot of other things." She added she "continúes to be' willing to pay for excellent schools." The only applause during the hearing was given to two speakers who were in favor of the budget and 6.88-mill package. The president of the Haisley PTO told the trustees by letter that the consensus of her neighborhood is that chances of the 6.88 milis passing are "dismal." She said it would be "most unwise" for the board to go for more than the renewal, because of parental disgust with Huron High, "permissiveness" and "frills." Her sentiments were echoed by Gerald Gottlieb, Lakewood PTO president, who said his neighborhood consensus is that the 6.88-mill package would "never pass." In fact, it would probably lose, he said, by a 4-to-l margin. William Bott, president of the Ann Arbor Chamber of Commerce, said his organization feels it can lend its "full support" to the proposed $4,9 million bonding issue June 9 for the construction of a fifth junior high school. But it would be "most difficult," he added, for the C of C to support any more than the 3.37-mill renewal. Bott said the C of C feels the present quality of the school system can be maintained with the renewal millage only. Westerman disagrees, and told the audience last night a minimum ,of 5.295 milis are needed to meet salary commitments and to provide for the expected pupil growth of 837 new students. Albert J. Samborn, executive vice president of the Ann Arbor Board of Realtors, said the board must attempt to have the "best educational program possible," not necessary the "best possible educational program." He said the cliente of local real estáte firms are telling salesmen "like never before" that they don't want to hear about the problems of the public schools because they have their own' problems. The shortest comment of the night carne from a man who said his children, educated in the Ann Arbor public schools, can neither write legibly nor spell. "What is this quality education you're talking about?" he asked. Westerman will present the trustees a list of possible budget cuts next week at the board's early briefing session. The last possible date for setting the millage is May 7.