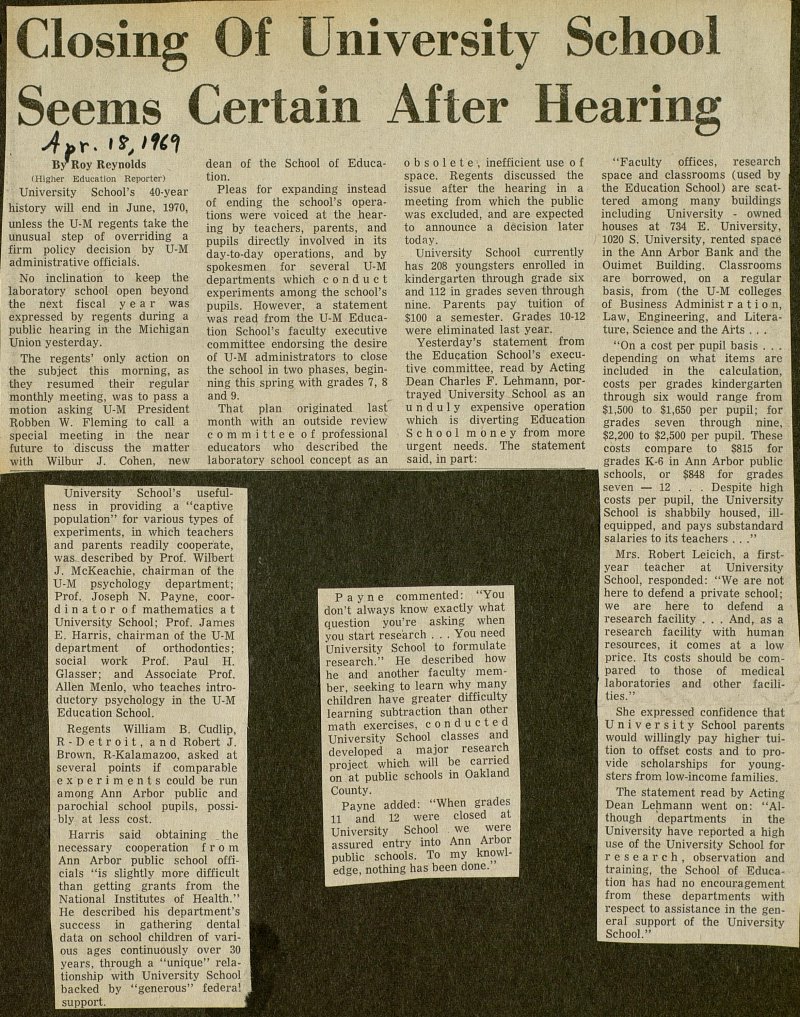 University School's 40-year history will end in June, 1970, unless the U-M regents take the unusual step of overriding a firm policy decisión by U-M administrative officials. No inclination to keep the laboratory school open beyond the next fiscal y e a r was expressed by regents during a public hearing in the Michigan Union yesterday. The regents' only action on the subject this morning, as they resumed their regular monthly meeting, was to pass a motion asking U-M President Robben W. Fleming to cali a special meeting in the near future to discuss the matter with Wilbur J. Cohen, new deán of the School of Education. Pleas for expanding instead of ending the school's operations were voiced at the hearing by teachers, parents, and pupils directly involved in its day-to-day operations, and by spokesmen for several U-M departments which c o n d u c t experiments among the school's pupils. However, a statement was read from the U-M Education School's faculty executive committee endorsing the desire of U-M administrators to close the school in two phases, beginning this spring with grades 7, 8 and 9. That plan originated last month with an outside review committee of professional educators vvho described the laboratory school concept as an obsolete, inefficiënt use o f space. Regents discussed the issue after the hearing in a meeting from which the public was excluded, and are expected to announce a decisión later today. University School currently has 208 youngsters enrolled in kindergarten through grade six and 112 in grades seven through nine. Parents pay tuition of $100 a semester. Grades 10-12 were eliminated last year. Yesterday's statement from the Education School's executive committee, read by Acting Dean Charles F. Lehmann, portrayed University School as an u n d u 1 y expensive operation which is diverting Education School money from more urgent needs. The statement said, in part: "Faculty offices, research space and classrooms (used by the Education School) are scattered among many buildings including University - owned houses at 734 E. University, 1020 S. University, rented spacê in the Ann Arbor Bank and the Ouimet Building. Classrooms are borrowed, on a regular basis, from (the U-M colleges of Business Administ r a t i o n, Law, Engineering, and Literature, Science and the Arts . . . "On a cost per pupil basis . . . depending on what items are included in the calculation, costs per grades kindergarten through six would range from $1,500 to $1,650 per pupil; for grades seven through nine, $2,200 to $2,500 per pupil. These costs compare to $815 for grades K-6 in Ann Arbor public schools, or $848 for grades seven - 12 ... Despite high costs per pupil, the University School is shabbily housed, illequipped, and pays substandard salaries to its teachers . . ." Mrs. Robert Leicich, a firstyear teacher at University School, responded: "We are not here to defend a private school; we are here to defend a research facility . . . And, as a research facility with human resources, it comes at a low price. lts costs should be compared to those of medical laboratories and other facilities." She expressed confidence that University School parents would willingly pay higher tuition to offset costs and to provide scholarships for youngsters from low-income families. The statement read by Acting Dean Lehmann went on: "Although 'departments in the University have reported a high use of the University School for research, observation and training, the School of Educa - tion has had no encouragement from these departments with respect to assistance in the general support of the University School." University School' s usefulness in providing a "captive population" for various types of experiments, in which teachers and parents readily cooperate, described by Prof. Wilbert J. McKeachie, chairman of the U-M psychology department; Prof. Joseph N. Payne, coordinator of mathematics a t University School; Prof. James E. Harris, chairman of the U-M department of orthodontics; social work Prof. Paul H. Glasser; and Associate Prof. Allen Menlo, who teaches introductory psychology in the U-M Education School. Regents William B. Cudlip, R-Detroit, and Robert J. Brown, R-Kalamazoo, asked at several points if comparable experiments could be run among Ann Arbor public and parochial school pupils, possibly at less cost. Harris said obtaining .the necessary cooperation f r o m Ann Arbor public school officials "is slightly more difficult than getting grants from the National Institutes of Health." He described his department's success in gathering dental I data on school children of various ages continuously over 30 I years, through a "unique" relaI tionship with University School I backed by "generous" federa! I support. _ Payne commented: "You don't always know exactly what question you're asking when you start research . . . You need University School to formúlate research." He described how he and another faculty member, seeking to learn why many children have greater difficulty learning subtraction than other math exercises, conducted University School classes and developed a major research project which. will be carried on at public schools in Oakland County. Payne added: "When grades 11 and 12 were closed at University School we were assured entry into Ann Arbor public schools. To my knowledge, nothing has been done.'