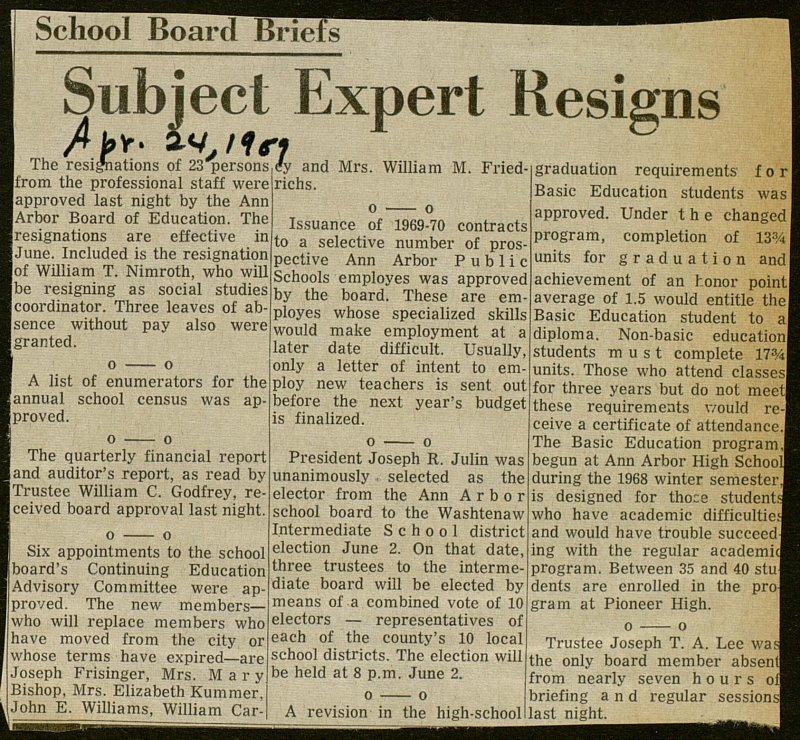 The resigriations of 23 persons Ifrom the professional staff were lapproved last night by the Ann lArbor Board of Education. The resignations are effective in June. Included is the resignation of William T. Nimroth, who will be resigning as social studies coördinator. Three leaves of absence without pay also were granted. o o A list of enumerators for the lannual school census was approved. o o The quarterly financial report and auditor's report, as read by Trustee William C. Godfrey, received board approval last night. o o Six appointments to the school board's Continuing Education Advisory Committee were approved. The new members - who will replace members who have moved from the city or whose terms have expired - are Joseph Frisinger, Mrs. M a r y Bishop, Mrs. Elizabeth Kummer. John E. Williams, William éy and Mrs. William M. Fried richs. o o Issuance of 1969-70 contracts to a selective number of pros pective Ann Arbor Public Schools employés was approvec by the board. These are employés whose specialized skills would make employment at a later date difficult. Usually, only a letter of intent to employ new teachers is sent out before the next year's budget is finalized. o o President Joseph R. Julin was unanimously seiected as the elector from the Ann Arbor school board to the Washtenaw Intermedíate School district election June 2. On that date, three trustees to the intermedíate board will be elected by means of a combined vote of 10 electors - representatives of each of the county's 10 local school districts. The election will be held at 8 p.m. June 2. o o A revisión in the high-school graduation requirements f o r Basic Education students was approved. Under the changed program, completion of 13% units for graduation and! achievement of an honor point average of 1.5 would entitle the Basic Education student to a diploma. Non-basic educationl students must complete 17% units. Those who attend classes! for three years but do not meetl these requirements vould re-I ceive a certifícate of attendance.l The Basic Education program! begun at Ann Arbor High Schooi during the 1968 winter semester] is designed for thoce studentsj who have academie difficultiea and would have trouble succeedJ ing with the regular academici program. Between 35 and 40 stul dents are enrolled in the pro! gram at Pioneer High. o o Trustee Joseph T. A. Lee wasB ;he only board member absent! rom nearly seven h o u r s oll )riefing and regular sessionsl ast night. I