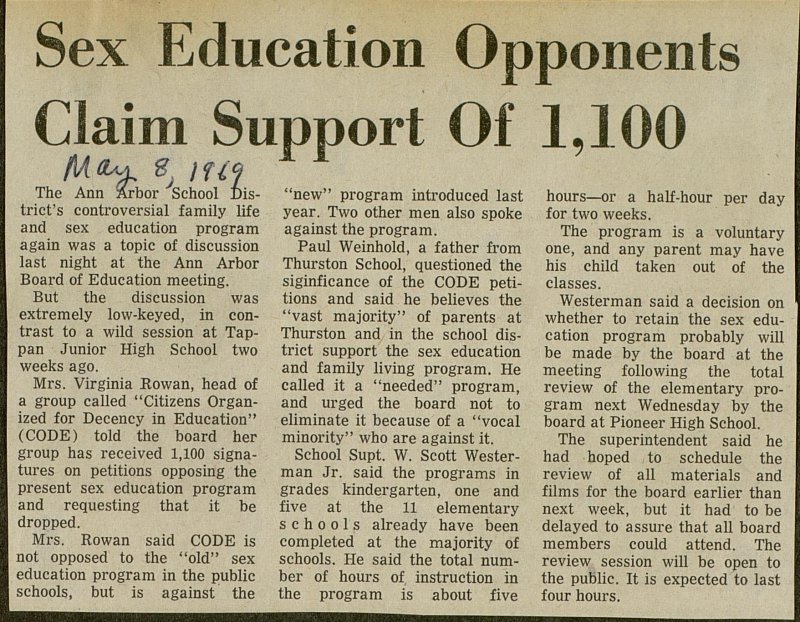 The Ann ftrbor School District's controversial family life and sex education program again was a topic of discussion last night at the Ann Arbor Board of Education meeting. But the discussion was extremely low-keyed, in contrast to a wild session at Tappan Junior High School two weeks ago. Mrs. Virginia Rowan, head of a group called "Citizens Organized for Decency in Education" (CODE) told the board her group has received 1,100 signatures on petitions opposing the present sex education program and requesting that it be dropped. Mrs. Rowan said CODE is not opposed to the "old" sex education program in the public schools, but is against the "new" program introduced last year. Two other men also spoke against the program. Paul Weinhold, a father from Thurston School, questioned the siginficance of the CODE petitions and said he believes the "vast majority" of parents at Thurston and in the school district support the sex education and family living program. He called it a "needed" program, and urged the board not to elimínate it because of a "vocal minority" who are against it. School Supt. W. Scott Westerman Jr. said the programs in grades kindergarten, one and five at the 11 elementary schools already have been completed at the majority of schools. He said the total number of hours of, instruction in the program is about five hours- or a half-hour per day for two weeks. The program is a voluntary one, and any parent may have his child taken out of the classes. Westerman said a decisión on whether to retain the sex education program probably will be made by the board at the meeting following the total review of the elementary program next Wednesday by the board at Pioneer High School. The superintendent said he had hoped to schedule the review of all materials and films for the board earlier than next week, but it had to be delayed to assure that all board members could attend. The review session will be open to the public. It is expected to last four hours.