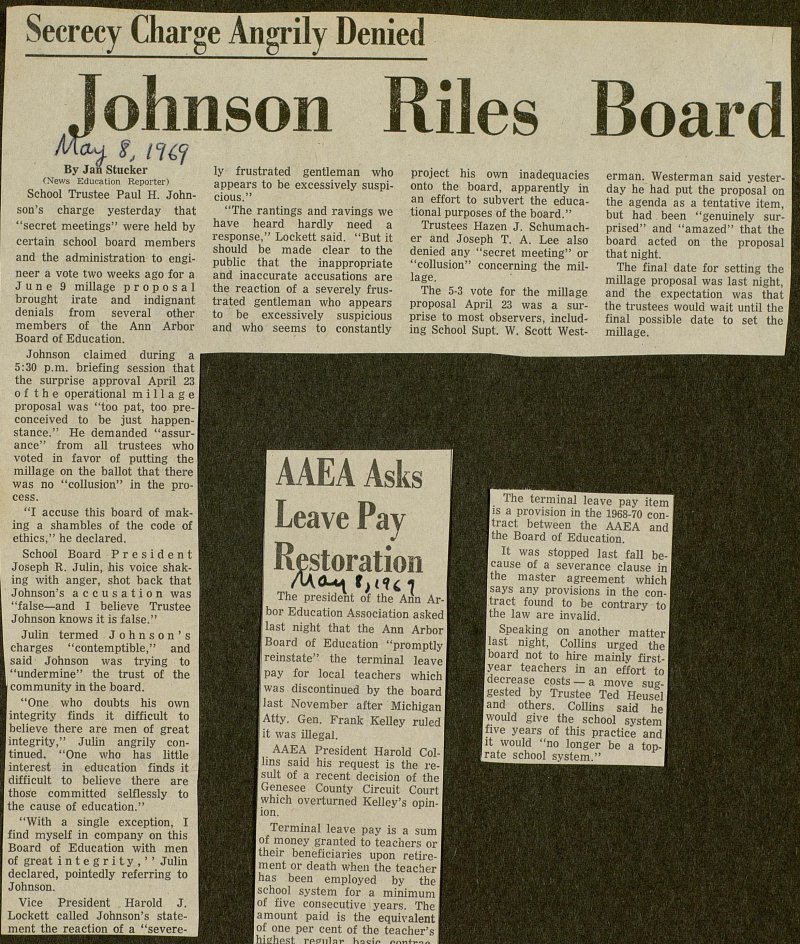 School Trustee Paul H. Johnson's charge yesterday that "secret meetings" were held by certain school board members and the administration to engineer a vote two weeks ago for a J u n e 9 millage proposal brought irate and indignant denials from several other members of the Ann Arbor Board of Education. Johnson claimed during a 5:30 p.m. briefing session that the surprise approval April 23 o f t h e operational millage proposal was "too pat, too preconceived to be just 1 stance." He demanded "assurance" from all trustees who voted in favor of putting the millage on the ballot that there was no "collusion" in the process. "I accuse this board of making a shambles of the code of ethics," he declared. School Board President Joseph R. Julin, his voice shaking with anger, shot back that Johnson's accusation was "false- and I believe Trustee Johnson knows it is false." Julin termed Johnson's charges "contemptible," and said Johnson was trying to "undermine" the trust of the community in the board. "One who doubts his own integrity finds it difficult to believe there are men of great integrity," Julin angrily continued. "One who has little interest in education finds it difficult to believe there are I those committed selflessly to the cause of education." "With a single exception, I find myself in company on this I Board of Education with men of great integrity,'' Julin declared, pointedly referring to Johnson. Vice President Harold J. Lockett called Johnson's statement the reaction of a ly frustrated gentleman who appears to be excessively suspicious." "The rantings and ravings we have heard hardly need a response," Lockett said. "But it should be made clear to the public that the inappropriate and inaccurate accusations are the reaction of a severely frustrated gentleman who appears to be excessively suspicious and who seems to constantly project his own inadequacies onto the board, apparently in an effort to subvert the educational purposes of the board." Trustees Hazen J. Schumacher and Joseph T. A. Lee also denied any "secret meeting" or "collusion" concerning the millage. The 5-3 vote for the millage proposal April 23 was a surprise to most observers, including School Supt. W. Scott erman. Westerman said yesterday he had put the proposal on the agenda as a tentative item, but had been "genuinely surprised" and "amazed" that the board acted on the proposal that night. The final date for setting the millage proposal was last night, and the expectation was that the trustees would wait until the final possible date to set the i millage.