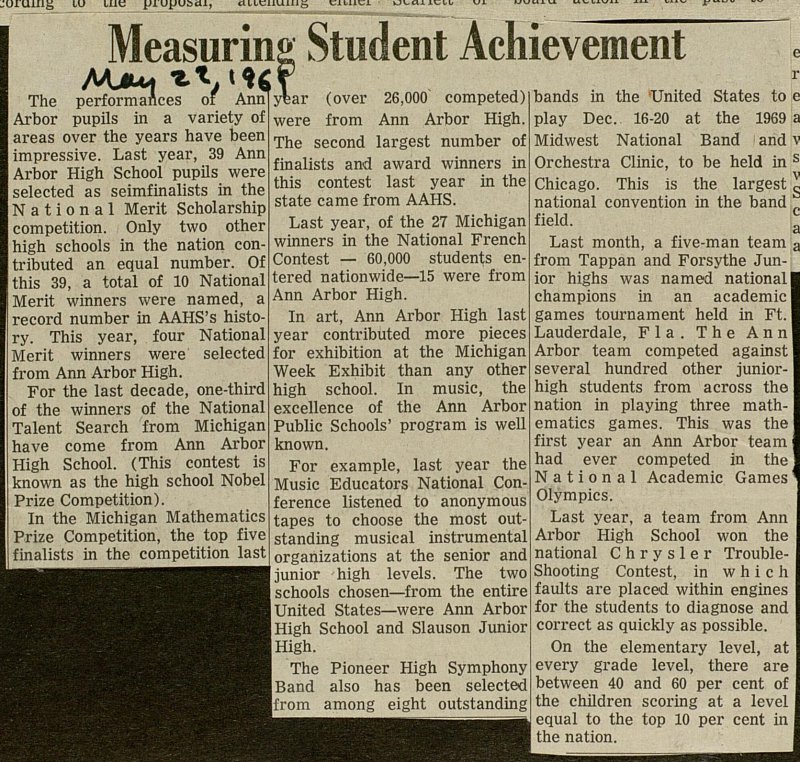 The performances of Ann Arbor pupils in a variety of areas over the years have been impressive. Last year, 39 Ann Arbor High School pupils were selected as seimfinalists in the National Merit Scholarship competition. Only two other high schools in the nation contributed an equal number. Of this 39, a total of 10 National Merit winners were named, a record number in AAHS's history. This year, four National Merit winners were selected from Ann Arbor High. For the last decade, one-third of the winners of the National Talent Search from Michigan have come from Ann Arbor High School. (This contest is known as the high school Nobel Prize Competition). In the Michigan Mathematics Prize Competition, the top five finalists in the competition last yfear (over 26,000' competed) were from Ann Arbor High. The second largest number of finalists and award winners in this contest last year in the state carne from AAHS. Last year, of the 27 Michigan winners in the National French Contest - 60,000 students entered nationwide- 15 were from Ann Arbor High. In art, Ann Arbor High last year contributed more pieces for exhibition at the Michigan Week Exhibit than any other high school. In music, the excellence of the Ann Arbor Public Schools' program is well known. For example, last year the Music Educators National Conference listened to anonymous tapes to choose the most outstanding musical instrumental organizations at the senior and junior high levéis. The two schools chosen - from the entire United States- were Ann Arbor High School and Slauson Junior High. The Pioneer High Symphony Band also has been selected from among eight outstanding bands in the United States to play Dec. 16-20 at the 1969 Midvvest National Band and Orchestra Clinic, to be held in Chicago. This is the largest national convention in the band field. Last month, a five-man team from Tappan and Forsythe Junior highs was named national champions in an academie games tournament held in Ft. Lauderdale, Fla. The Ann Arbor team competed against several hundred other juniorhigh students from across the nation in playing three mathematics games. This was the first year an Ann Arbor team had ever competed in the National Academie Games Olympics. Last year, a team from Ann Arbor High School won the national Chrysler TroubleShooting Contest, in w h i c h faults are placed within engines for the students to diagnose and correct as quickly as possible. On the elementary level, at every grade level, there are between 40 and 60 per cent of the children scoring at a level equal to the top 10 per cent in the nation.