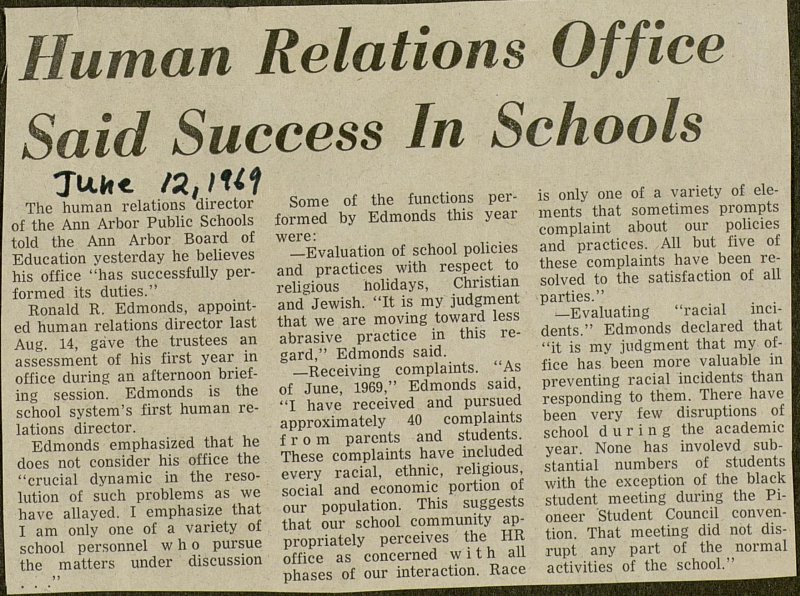 The human relations director of the Ann Arbor Public Schools told the Ann Arbor Board of Education yesterday he believes his office "has successfully performed its duties." Ronald R. Edmonds, appointed human relations director last Aug. 14, gave the trustees an assessment of his first year in office during an afternoon briefing session. Edmonds is the school system's first human relations director. Edmonds emphasized that he does not consider his office the "crucial dynamic in the resolution of such problems as we have allayed. I emphasize that I am only one of a variety of school personnel who pursue the matters under discussion Some of the functions performed by Edmonds this year were: - Evaluaüon of school policies and practices with respect to religious holidays, Christian and Jewish. "It is my judgment that we are moving toward less abrasive practice in this regard," Edmonds said. - Receiving complaints. "As of June, 1969," Edmonds said, "I have received and pursued approximately 40 complaints f r o m parents and students. These complaints have included every racial, ethnic, religious, social and economie portion of our population. This suggests that our school community appropriately perceives the HR office as concerned with all phases of our interaction. Race is only one of a variety of elements that sometimes prompts complaint about our policies and practices. All but five of these complaints have been resolved to the satisfaction of all parties." ,-Evaluating "racial mcidents." Edrnonds declared that "it is my judgment that my office has been more valuable in preventing racial incidents than responding to them. There have been very few disruptions of school d u r i n g the academie year. None has involevd substantial numbers of students with the exception of the black student meeting during the Pioneer Student Council convention. That meeting did not disrupt any part of the normal activities of the school." -