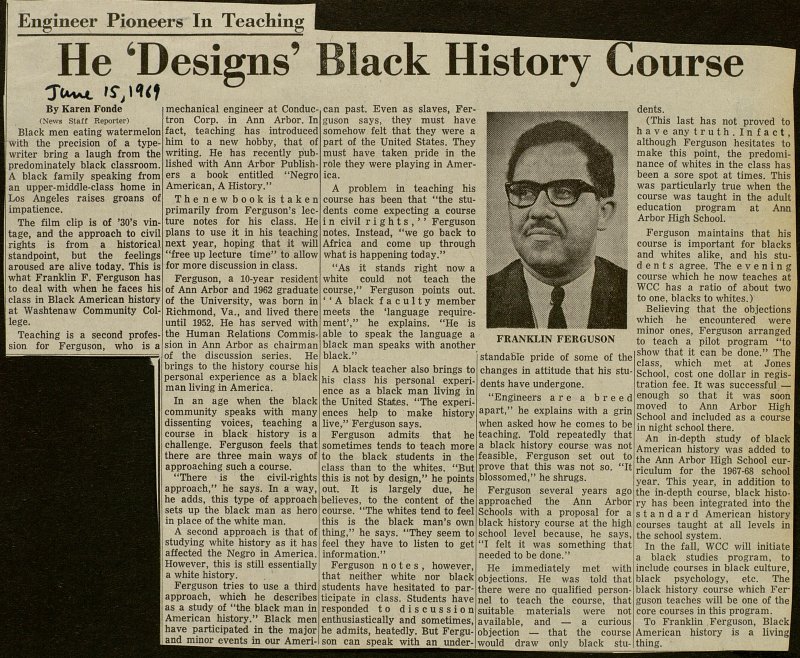 Black men eating watermelon with the precisión of a typewriter bring a laugh from the predominately black classroom. A black family speaking from an upper-middle-class home in Los Angeles raises groans of impatience. The film clip is of '30's vintage, and the approach to civil rights is from a historica), standpoint, but the feelings aroused are alive today. This is what Franklin F. Ferguson has to deal with when he faces his class in Black American history at Washtenaw Community College. Teaching is a second profession for Ferguson, who is a mechamcal engmeer at Conductron Corp. in Ann Arbor. In fact, teaching has introduced him to a new hobby, that of writing. He has recently published with Ann Arbor Publishers a book entitled "Negro American, A History." Thenewbook is taken primarily from Ferguson's lecture notes for his class. He plans to use it in his teaching next year, hoping that it will "free up lecture time" to allow for more discussion in class. Ferguson, a 10-year resident of Ann Arbor and 1962 gradúate of the University, was born in Richmond, Va., and lived there until 1952. He has served with the Human Relations Commission in Ann Arbor as chairman of the discussion series. He brings to the history course his personal experience as a black man living in America. In an age when the black community speaks with many dissenting voices, teaching a course in black history is a challenge. Ferguson feels that there are three main ways of approaching such a course. "There is the civil-rights approach," he says. In a way, he adds, this type of approach sets up the black man as hero in place of the white man. A second approach is that of studying white history as it has affected the Negro in America. However, this is still essentially a white history. Ferguson tries to use a third approach, which he describes as a study of "the black man in American history." Black men have participated in the major and minor events in our can past. Even as slaves, Ferguson says, they must have somehow feit that they were a part of the United States. They must have taken pride in the role they were playing in America. A problem in teaching his course has been that "the students come expecting a course i n civil r i g h t s , ' ' Ferguson notes. Instead, "we go back to África and come up through what is happening today." "As it stands right now a white could not teach the course," Ferguson points out. ' ' A black f a c u 1 1 y member meets the 'language requirement'," he explains. "He is able to speak the language a black man speaks with another black." A black teacher also brings to his class his personal experience as a black man living in the United States. "The experiences help to make history live," Ferguson says. Ferguson admits that he sometimes tends to teach more to the black students in the class than to the whites. "But this is not by design," he points out. It is largely due, he believes, to the content of the course. "The whites tend to feel this is the black man's own thing," he says. "They seem to feel they have to listen to get information." Ferguson notes, however, that neither white nor black students have hesitated to particípate in class. Students have responded to discussion enthusiastically and sometimes, he admits, heatedly. But Ferguson can speak with an standable pride of some of the changes in attitude that his students have undergone. "Engineers are a breed apart," he explains with a grin when asked how he comes to be teaching. Told repeatedly that a black history course was not feasible, Ferguson set out to prove that this was not so. "It blossomed," he shrugs. Ferguson several years ago approached the Ann Arbor Schools with a proposal for a black history course at the high school level because, he says, "I feit it was something that needed to be done." He immediately met with objections. He was told that there were no qualified personnel to teach the course, that suitable materials were not available, and - a curious objection - that the course would draw only black dents. (This last has not proved to have any truth. Infact, although Ferguson hesitates to make this point, the predominance of whites in the class has been a sore spot at times. This was particularly true when the course was taught in the adult education program at Ann Arbor High School. Ferguson maintains that his course is important for blacks and whites alike, and his students agree. The e v e n i n g course which he now teaches at WCC has a ratio of about two to one, blacks to whites.) Believing that the objections which he encountered were minor ones, Ferguson arranged to teach a pilot program "to show that it can be done." The class, which met at Jones School, cost one dollar in registration fee. It was successful - enough so that it was soon moved to Ann Arbor High School and included as a course in night school there. An in-depth study of black American history was added to the Ann Arbor High School curriculum for the 1967-68 school year. This year, in addition to the in-depth course, black history has been integrated into the standard American history courses taught at all levéis in the school system. In the f all, WCC will initiate a black studies program, to include courses in black culture, black psychology, etc. The black history course which Ferguson teaches will be one of thel core courses in this program. I To Franklin Ferguson, Black American history is a living thing.