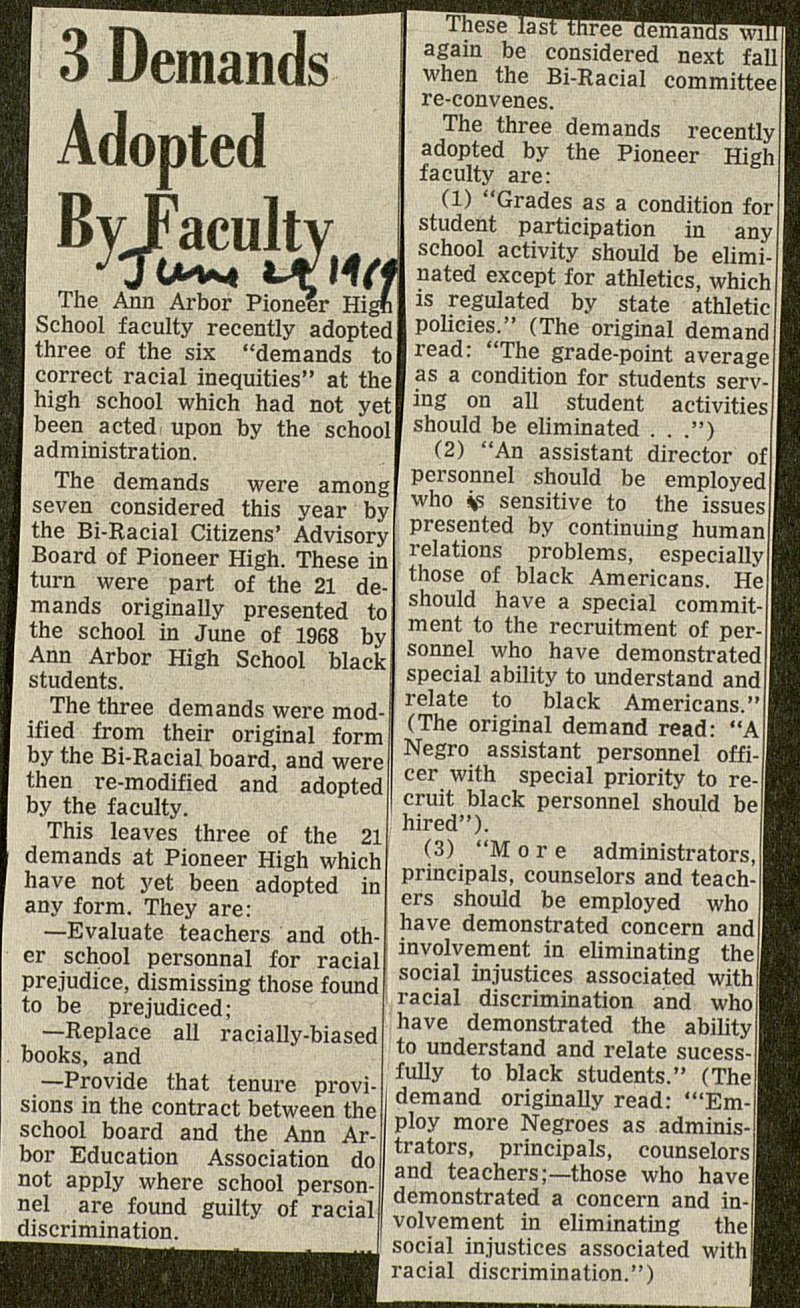 The Ann Arbor Pioneer Hign School faculty recently adopted three of the six "demands to correct racial inequities" at the high school which had not yet been acted upon by the school administration. The demands were among seven considered this year by the Bi-Racial Citizens' Advisory Board of Pioneer High. These in turn were part of the 21 demands originally presented to the school in June of 1968 by Ann Arbor High School black students. The three demands were modified from their original form by the Bi-Racial board, and were then re-modified and adopted by the faculty. This leaves three of the 21 demands at Pioneer High which have not yet been adopted in any form. They are: -Evalúate teachers and other school personnal for racial prejudice, dismissing those found to be prejudiced; - Replace all racially-biased books, and - Provide that tenure provisions in the contract between the school board and the Ann Arbor Education Association do not apply where school personnel are found guilty of racial discrimination. Thehe Ja si three demañds wffli agam be considered next f all when the Bi-Racial committee re-convenes. The three demands recently adopted by the Pioneer High faculty are: (1) "Grades as a condition for student participaron in any school activity should be eliminated except for athletics, which is regulated by state athletic policies." (The original demand read: "The grade-point average as a condition for students II ing on all student activities II should be eliminated . . .") (2) "An assistant director of II personnel should be employed II who v sensitive to the issues presented by continuing human relations problems, especially those of black Americans. He should have a special II ment to the recruitment of 1 sonnel who have demonstrated II special ability to understand and I relate to black Americans." I (The original demand read: "A II Negro assistant personnel offi-B eer with special priority to re-B eruit black personnel should bel hired"). (3) "More administra tors, I principáis, counselors and II ers should be employed who have demonstrated concern and involvement in eliminating the social injustices associated with racial discrimination and who i have demonstrated the ability to understand and relate 1 íuUy to black students." (The demand originally read: '"Em-i ploy more Negroes as administrators, principáis, counselors and teachers;- those who have demonstrated a concern and involvement in eliminating the social injustices associated with racial discrimination.")