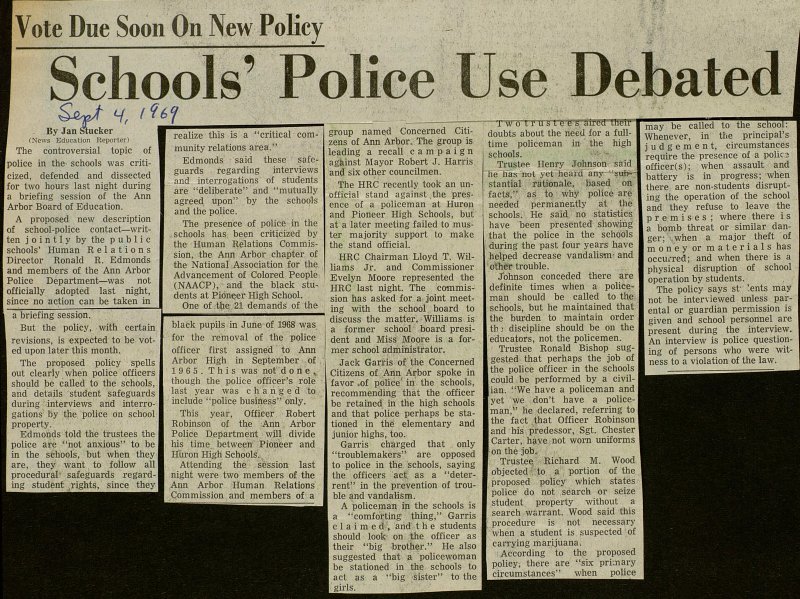 The controversial topic of police in schools was criticized, defended and dissected for two hours last night during a briefing session of the Ann Arbor Board of Education. A proposed new description of school-police contact - written jointly by the public schools' Human Relations Director Ronald R. Edmonds and members of the Ann Arbor Police Department- was not officially adopted last night, since no action can be taken in a briefing session. But the policy, with certain revisions, is expected to be voted upon later this month. The proposed policy spells out clearly when police officers should be called to the schools, and details student safeguards during interviews and interrogations by the police on school property. Edmonds told the trustees the police are "not anxious" to be in the schools, but when they are, they want to follow all procedural safeguards regarding student rights, since they realize this is a "critical community relations area." Edmonds said these safeguards regarding interviews and interrogations of students are "deliberate" and "mutually agreed upon" by the schools and the police. The presence of police in the schools has been criticized by the Human Relations Commission, the Ann Arbor chapter of the National Association for the Advancement of Colored People (NAACP), and the black students at Pioneer High School. One of the 21 demands of the black pupils in June of 1968 was for the removal of the police officer first assigned to Ann Arbor High in September of 1965. T h i s was not done, though the police officer's role last year was changed to include "police business" only. This year, Officer Robert Robinson of the Ann Arbor Police Department will divide his time between Pioneer and Huron High Schools. Attending the session last night were two members of the Ann Arbor Human Relations Commission and members of a group named Concerned Citizens of Ann Arbor. The group is leading a recall campaign against Mayor Robert J. Harris and six other councilmen. The HRC recently took an unofficial stand against the presence of a policeman at Huron and Pioneer High Schools, but at a later meeting failed to muster majority support to make the stand official. HRC Chairman Lloyd T. Williams Jr. and Commissioner Evelyn Moore represented the HRC last night. The commission has asked for a joint meeting with the school board to discuss the matter. Williams is a former school board president and Miss Moore is a former school administrator. Jack Garris of the Concerned Citizens of Ann Arbor spoke in favor of police in the schools, recommending that the officer be retained in the high schools and that police perhaps be stationed in the elementary and junior highs, too. Garris charged that only "troublemakers" are opposed to police in the schools, saying the officers act. as a "deterrent" in the prevention of trouble and vandalism. A policeman in the schools is a "comforting thing," Garris claimed, and the students should look on the officer as their "big brother." He also suggested that a policewoman be stationed in the schools to act as a "big sister" to the girls. Two trustees aired their doubts about the need for a full-time policeman in the high schools. Trustee Henry Johnson said he has nut yet heard any "substantial rationale, based on facts," as to why police are needed permanently at the schools. He said no statistics have been presented showing that the police in the schools during the past four years have helped decrease vandalism and other trouble. Johnson conceded there are definite times when a policeman should be called to the schools, but he maintained that the burden to maintain order the discipline should be on the educators, not the policemen. Trustee Ronald Bishop suggested that perhaps the job of the police officer in the schools could be performed by a civilian. "We have a policeman and yet we don't have a policeman," he declared, referring to the fact that Officer Robinson and his predecessor, Sgt. Chester Carter, have not worn uniforms on the job. Trustee Richard M. Wood objected to a portion of the proposed policy which states police do not search or seize student property without a search warrant. Wood said this procedure is not necessary when a student is suspected of carrying marijuana. According to the proposed policy; there are "six primary circumstances" when police maybe called to the school: Whenever, in the principal's judgment, circumstances require the presence of a police officer(s); when assault and battery is in progress; when there are non-students disrupting the operation of the school and they refuse to leave the premises ; where there is a bomb threat or similar danger; when a major theft of money or materials has occurred; and when there is a physical disruption of school operation by students. The policy says students may not be interviewed unless parental or guardian permission is given and school personnel are present during the interview. An interview is police questioning of persons who were witness to a violation of the law.