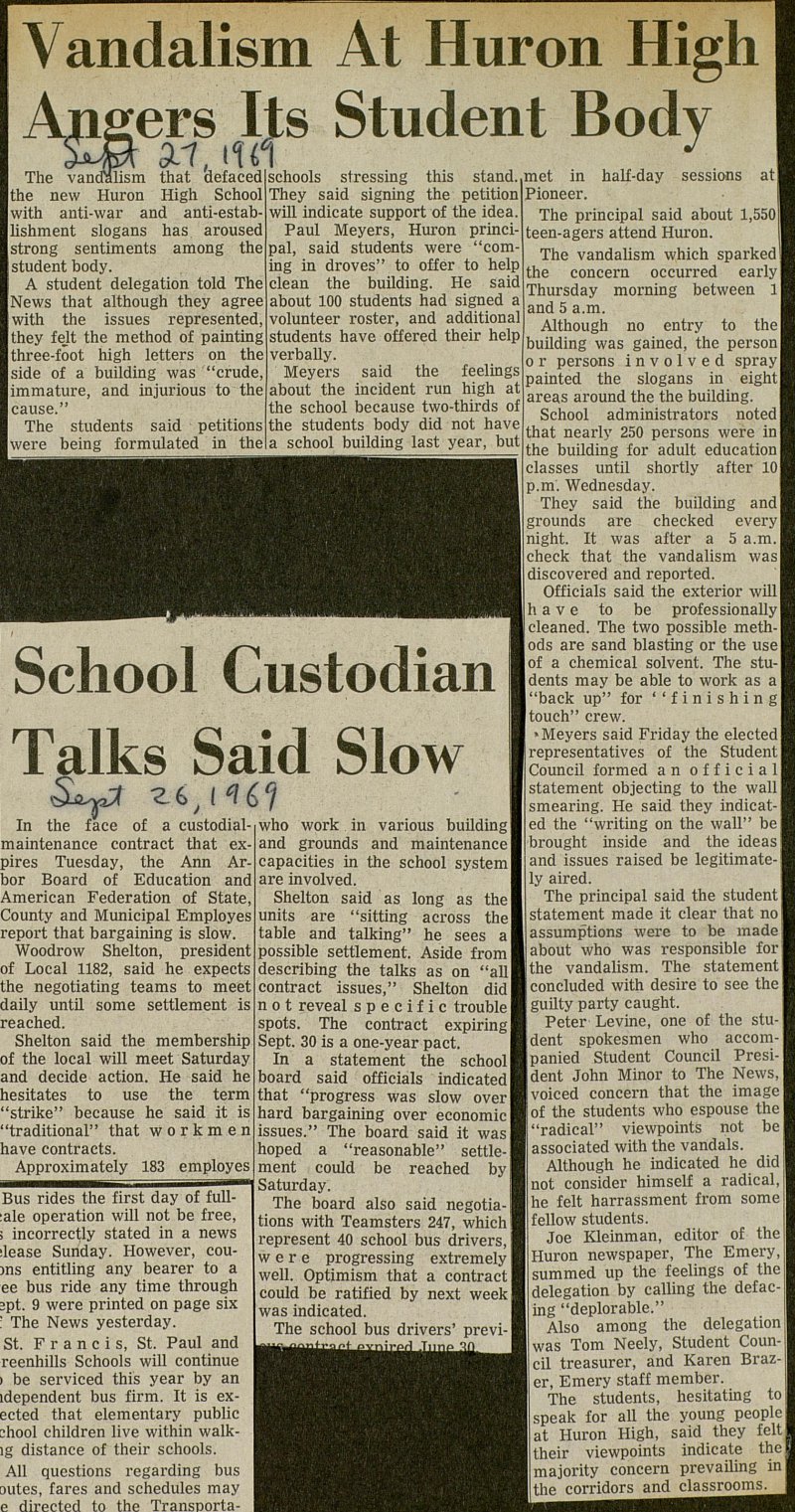 The vandalism that defaced the new Huron High School with anti-war and anti-establishment slogans has aroused strong sentiments among the student body. A student delegation told The News that although they agree with the issues represented, they feit the method of painting three-foot high letters on the side of a building was "crude, immature, and injurious to the cause." The students said petitions were being formulated in the I schools stressing this stand. They said signing the petition will indícate support of the idea. Paul Meyers, Hurón principal, said students were "coming in droves" to offer to help clean the building. He said about 100 students had signed a volunteer roster, and additional students have offered their help verbally. Meyers said the feelings about the incident run high at the school because two-thirds of the students body did not have a school building last year, but met in half-day sessions at! Pioneer. The principal said about 1,550 teen-agers attend Huron. The vandalism which sparked the concern occurred early Thursday morning between 1 and 5 a.m. Although no entry to the building was gained, the person o r persons involved spray painted the slogans in eight areas around the the building. School administrators noted that nearly 250 persons were in the building for adult education classes until shortly after 10 p.m. Wednesday. They said the building and grounds are checked every night. It was after a 5 a.m. check that the vandalism was discovered and reported. Officials said the exterior will have to be professionally cleaned. The two possible methods are sand blasting or the use of a chemical sol vent. The students may be able to work as a "back up" for ''finishing touch" crew. Meyers said Friday the electedl representatives of the Student! Council formed an official! statement objecting to the wallj smearing. He said they indicat-j ed the "writing on the wall" bel brought inside and the ideas! and issues raised be 1 ly aired. The principal said the student] statement made it clear that nol assumptions were to be made] about who was responsible forj the vandalism. The statement concluded with desire to see the! guilty party caught. Peter Levine, one of the student spokesmen who accompanied Student Council President John Minor to The News, voiced concern that the image of the students who espouse the "radical" viewpoints not be associated with the vandals. Although he indicated he did not consider himself a radical, he feit harrassment from some fellow students. Joe Kleinman, editor of the Huron newspaper, The Emery, summed up the feelings of the delegation by calling the defacing "deplorable." Also among the delegation was Torn Neely, Student Council treasurer, and Karen Brazer, Emery staff member. The students, hesitating to speak for all the young people at Huron High, said they feit their viewpoints indicate the majority concern prevailing in the corridors and classroomsJ