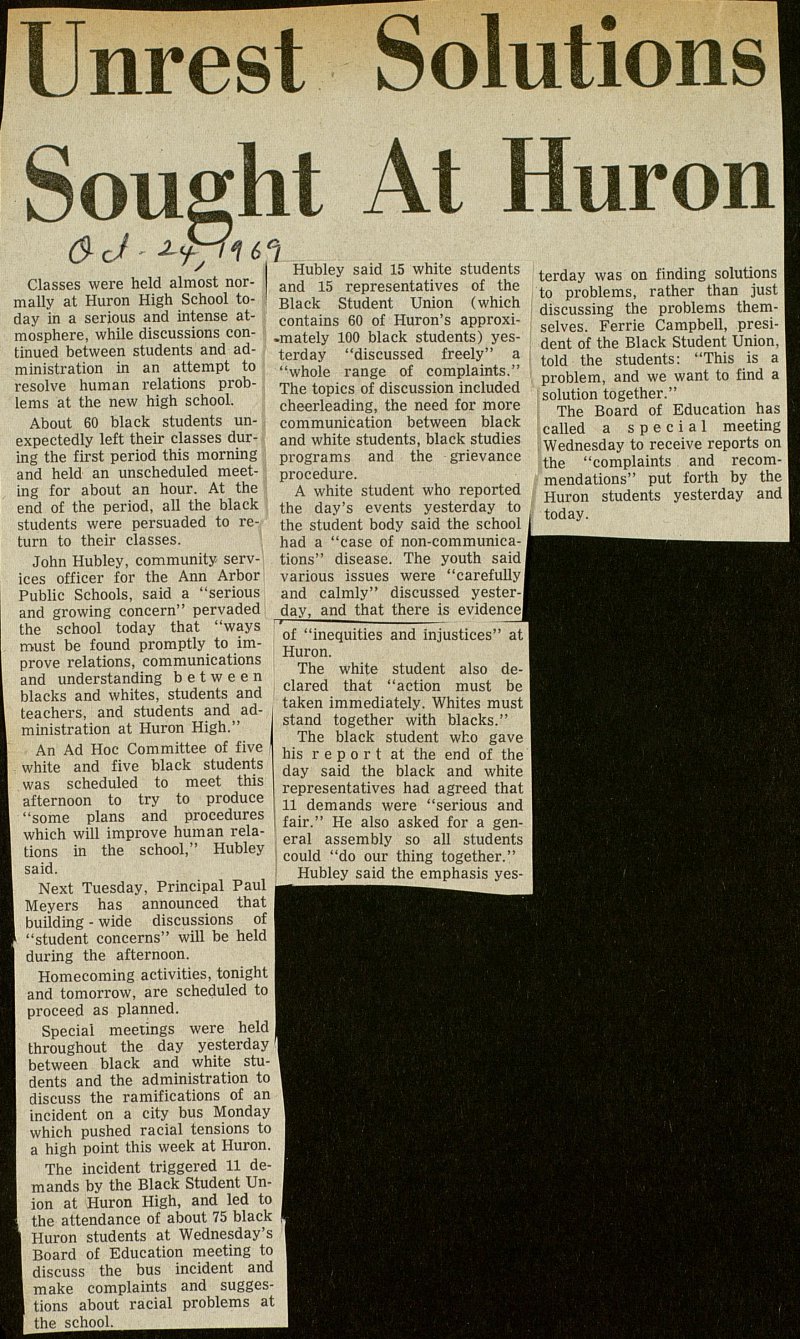 Classes were held almost normally at Huron High School today in a serious and intense atmosphere, while discussions continued between students and administration in an attempt to resolve human relations problems at the new high school. About 60 black students unexpectedly left their classes during the first period this morning and held an unscheduled meeting for about an hour. At the end of the period, all the black students were persuaded to return to their classes. John Hubley, community services officer for the Ann Arbor Public Schools, said a "serious and growing concern" pervaded the school today that "ways must be found promptly to improve relations, Communications and understanding between blacks and whites, students and teachers, and students and administration at Huron High." An Ad Hoc Committee of five white and five black students was scheduled to meet this afternoon to try to produce "some plans and procedures which will improve human relations in the school," Hubley said. Next Tuesday, Principal Paul Meyers has announced that building - wide discussions of "student concerns" will be held during the afternoon. Homecoming activities, tonight and tomorrow, are scheduled to proceed as planned. Special meetings were held I throughout the day yesterday 1 between black and white students and the administration to discuss the ramifications of an incident on a city bus Monday which pushed racial tensions to a high point this week at Huron. The incident triggered 11 demands by the Black Student Union at Huron High, and led to the attendance of about 75 black Huron students at Wednesday's Board of Education meeting to discuss the bus incident and make complaints and suggestions about racial problems at the school. Hubley said 15 white students and 15 representatives of the Black Student Union (which contains 60 of Huron's approxi-mately 100 black students) yesterday "discussed freely" a "whole range of complaints." The topics of discussion included cheerleading, the need for more communication between black and white students, black studies programs and the grievance procedure. A white student who reported the day's events yesterday to the student body said the school had a "case of 1 tions" disease. The youth saidl various issues were "carefullyj and calmly" discussed yester-l day, and that there is evidencej of "inequities and injustices" at Huron. The white student also declared that "action must be taken immediately. Whites must stand together with blacks." The black student wko gave his report at the end of the day said the black and white representatives had agreed that 11 demands were "serious and fair." He also asked for a general assembly so all students could "do our thing together." Hubley said the emphasis terday was on finding solutions I to problems, rather than just I discussing the problems I selves. Ferrie Campbell, I dent of the Black Student Union, I told the students: "This is a I problem, and we want to find a I solution together." The Board of Education has I called a special meeting . Wednesday to receive reports on I the "complaints and recommendations" put forth by the Huron students yesterday and j today. ;