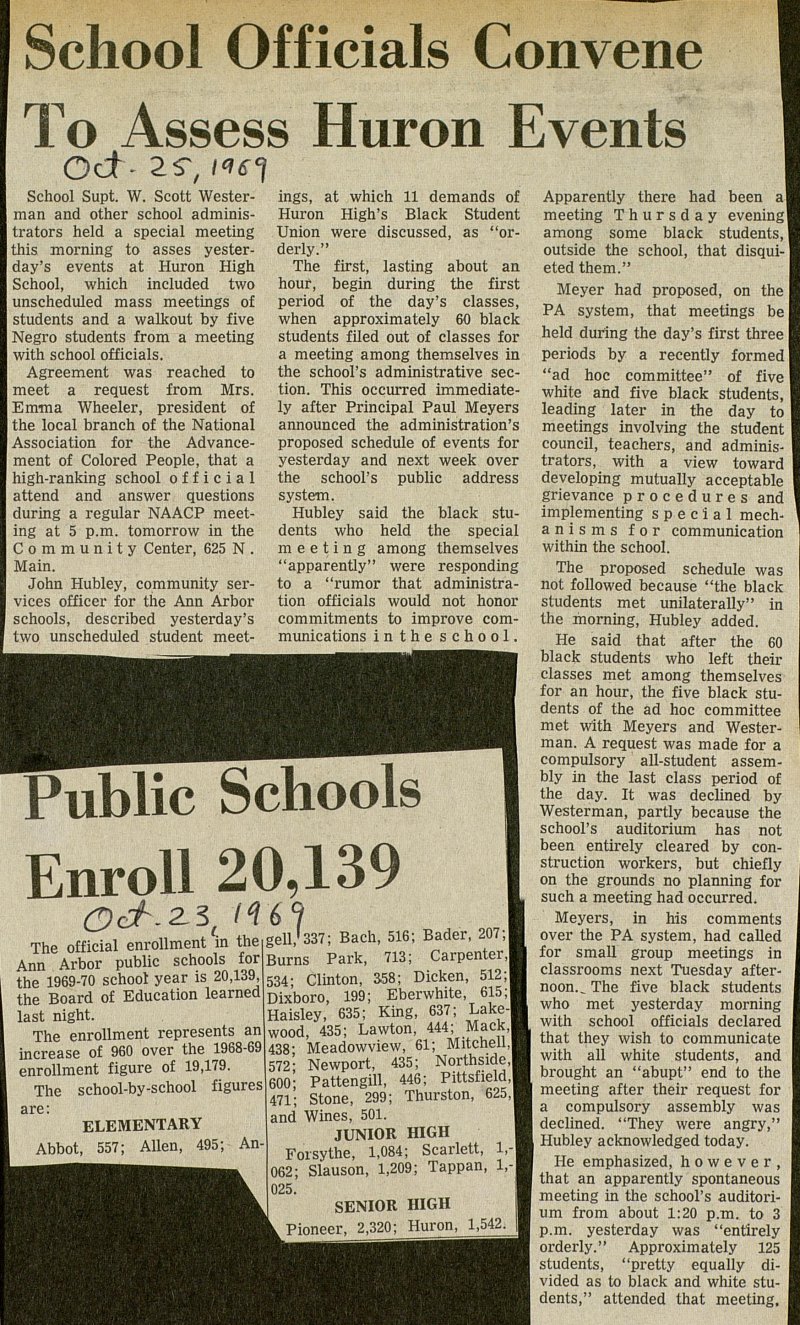 School Supt. W. Scott Westerman and other school administrators held a special meeting this morning to asses yesterday's events at Huron High School, which included two unscheduled mass meetings of students and a walkout by five Negro students from a meeting with school officials. Agreement was reached to meet a request from Mrs. Emma Wheeler, president of the local branch of the National Association for the Advancement of Colored People, that a high-ranking school official attend and answer questions during a regular NAACP meeting at 5 p.m. tomorrow in the Community Center, 625 N. Main. John Hubley, community services officer for the Ann Arbor schools, described yesterday's two unscheduled student ings, at which 11 demands of Huron High's Black Student Union were discussed, as "orderly." The first, lasting about an houf, begin during the first period of the day's classes, when approximately 60 black students filed out of classes for a meeting among themselves in the school's administrative section. This occurred immediately after Principal Paul Meyers announced the administration's proposed schedule of events for yesterday and next week over the school's public address s y stem. Hubley said the black students who held the special meeting among themselves "apparenüy" were responding to a "rumor that administration officials would not honor commitments to improve communications inthe school. Apparently there had been al meeting Thursday eveningl among some black students, outside the school, that disquieted them." Meyer had proposed, on the PA system, that meetings be held during the day's first three periods by a recently formed "ad hoc committee" of five white and five black students, leading later in the day to meetings involving the student council, teachers, and administrators, with a view toward developing mutually acceptable grievance procedures and implementing special mechanisms for communication within the school. The proposed schedule was not followed because "the black students met unilaterally" in the morning, Hubley added. He said that after the 60 black students who left their classes met among themselves for an hour, the five black students of the ad hoc committee met with Meyers and Westerman. A request was made for a compulsory all-student assembly in the last class period of the day. It was declined by Westerman, partly because the school's auditorium has not been entirely cleared by construction workers, but chiefly on the grounds no planning for such a meeting had occurred. Meyers, in his comments over the PA system, had called for small group meetings in classrooms next Tuesday afternoon. The five black students who met yesterday morning with school officials declared that they wish to communicate with all white students, and brought an "abupt" end to the I meeting after their request for a compulsory assembly was declined. "They were angry," Hubley acknowledged today. He emphasized, h o w e v e r , I that an apparently spontaneous meeting in the school's auditorium from about 1:20 p.m. to 3 p.m. yesterday was "entirely orderly." Approximately 125 students, "pretty equally divided as to black and white students," attended that meeting,