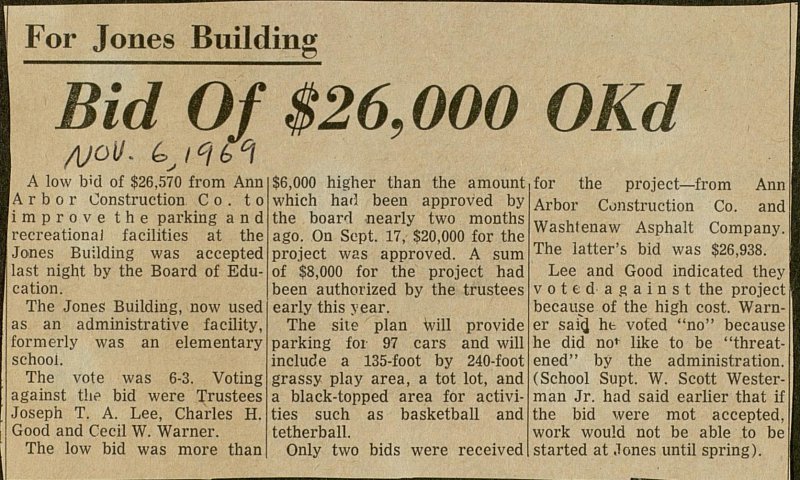 A low bd of $26,570 from Arm A r b o r Construction Co. to improve the parking and recreational facilities at the Jones Building was accepted last night by the Board of Education. The Jones Building, now used as an administrative facility, formerly was an elementary school. The vote was 6-3. Voting against the bid were Trustees Joseph T. A. Lee, Charles H. Good and Cecil W. Warner. The low bid was more than $6,000 higher than the amount which had been approved by the boaM nearly two months ago. On Sept. 17, $20,000 for the project was approved. A sum of $8,000 for the project had been authorized by the trustees early this year. The sile plan will provide parking for 97 cars and will include a 135-foot by 240-foot grassy play área, a tot lot, and a black-topped area for activities such as basketball and tetherball. Only two bids were received for the project- from Ann Arbor Cjnstruction Co. and Washtenaw Asphalt Company. The latter's bid was $26,938. Lee and Good indicated they voted against the project because of the high cost. Warner safd, ht vofed "no" because he did like to be "threatened" by the administraron. (School Supt. W. Scott Westerman Jr. had said earlier that if the bid were mot accepted, work would not be able to be started at Jones until spring).