No Penalty For Marchers 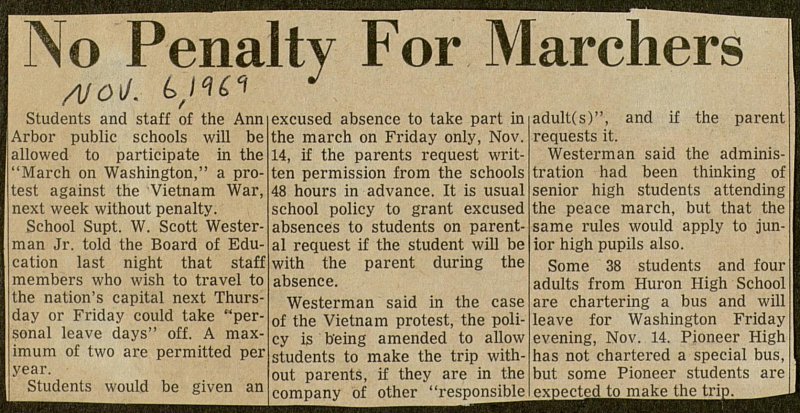 Students and staff of the Ann Arbor public schools will be allowed to particípate in the "March on Washington," a protest against the Vietnam War, next week without penalty. School Supt. W. Scott Westerman Jr. told the Board of Education last night that staff members who wish to travel to the nation's capital next Thursday or Friday could take "personal leave days" off. A maximum of two are permitted per year. Students would be given an excused absence to take part in the march on Friday only, Nov. 14, if the parents request written permission from the schools 48 hours in advance. It is usual school policy to grant excused absences to students on parental request if the student will be with the parent during the absence. Westerman said in the case of the Vietnam protest, the policy is being amended to allow students to make the trip without parents, if they are in the company of other "responsible adult(s)", and if the parent requests it. Westerman said the administration had been thinking of senior high students attending the peace march, but that the same rules would apply to junior high pupils also. Some 38 students and four adults from Huron High School are chartering a bus and will leave for Washington Friday evening, Nov. 14. Pioneer High has not chartered a special bus, but some Pioneer students are expected to make the trip.