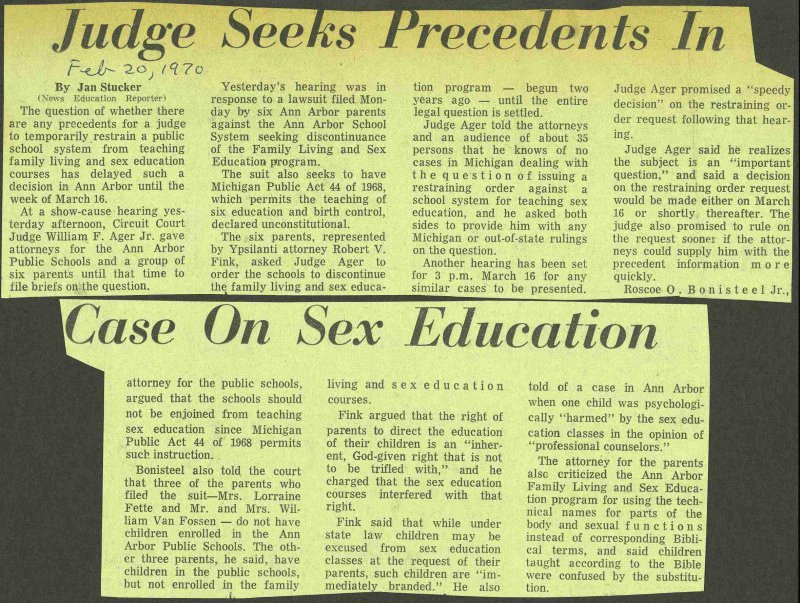 The question of whether there are any precedents for a judge to temporarily restrain a public school system from teaching family living and sex education courses has delayed such a decisión in Ann Arbor until the week of March 16. At a show-cause hearing yesterday afternoon, Circuit Court Judge William F. Ager Jr. gave attorneys for the Ann Arbor Public Schools and a group of six parents until that time to iile briefs on the question. Yesterday's hearing was in response to a lawsuit filed Monday by six Ann Arbor parents against the Ann Arbor School System seeking discontinuance of the Family Living and Sex Education program. The suit also seeks to have Michigan Public Act 44 of 1968, which permits the teaching of six education and birth control, declared unconstitutional. The six parents, represented by Ypsilanti attorney Robert V. Fink, asked Judge Ager to order the schools to discontinue the f amily living and sex tion program - begun two yêars ago - until the entire legal question is settled. Judge Ager told the attorneys and an audience of about 35 persons that he knows of no cases in Michigan dealing wiih the question of issuing a restraining order against a school system for teaching sex education, and he asked both sides to provide him with any Michigan or out-of-state rulings on the question. Another hearing has been set for 3 p.m. March 16 for any similar cases to be presented. Judge Ager promised a "speedy decisión" on the restraining order request following that hearing. Judge Ager said hè realizes the subject is an "important question," and said a decision on the restraining order request would be made either on March 16 or shortly thereafter. The judge also promised to rule on the request sooner if the attorneys could supply him with the precedent information more quickly. Roscoe O . Bonisteel Jr, attorney for the public schools, argued that the schools should not be eiijoined from teaching sex education since Michigan Public Act 44 of 1968 permits such instruction. Bonisteel also told the court that three of the parents who filed the suit- Mrs. Lorraine Fette and Mr. and Mrs. William Van Fossen - do not have children enrolled in the Ann Arbor Public Schools. The other three parents, he said, have children in the public schools, but not enrolled in the family living and sex education courses. Fink argued that the right of parents to direct the education of their children is an "inherent, God-given right that is not to be trifled with," and he charged that the sex education courses interfered with that right. Fink said that while under state law children may be excused from sex education classes at the request of their parents, such children are "immediately branded." He also told of a case in Ann Arbor when one child was psyehologically "harmed" by the sex education classes in the opinion of "professional counselors." The attorney for the parents also criticized the Ann Arbor Family Living and Sex Education program for using the technical names for parts of the j body and sexual functions instead of corresponding Biblical terms, and said children taught according to the Bible were confused by the substitu-l tion. _J