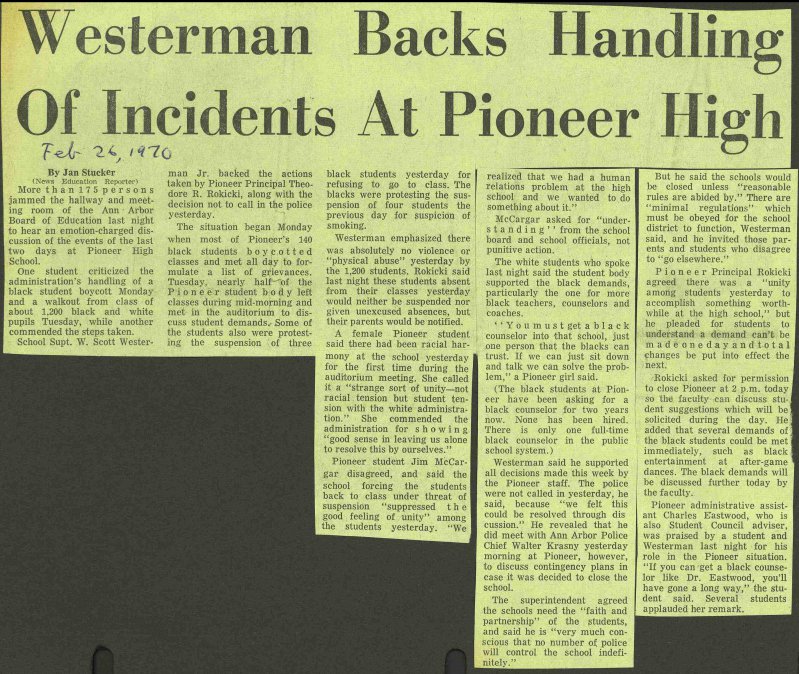 More than 175 persons jammed the hallway and meeting room of the Ann Arbor Board of Education last night to hear an emotion-charged discussion of the events of the last two days at Pioneer High School. One student criticized the administration's handling of a black student boycott Monday and a walkout from class of about 1,200 black and white pupils Tuesday, while another commended the steps taken. School Supt. W. Scott man Jr. backed the actions taken by Pioneer Principal Theodore R. Rokicki, along with the decisión not to cali in the pólice yesterday. The situation began Monday when most of Pioneer's 140 black students boycotted classes and met all day to formúlate a list of grievances. Tuesday, nearly "of the Pioneer student body left classes during mid-morning and met in the auditorium to discuss student demands Some of the students also were protesting the suspension of three black students yesterday for refusing to go to class. The blacks were protesting the suspension of four students the previous day for suspicion of smoking. Westerman emphasized there was absolutely no violence or "physical abuse" yesterday by the 1,200 students. Rokicki said last night these students absent from their classes yesterday would neither be suspended nor given unexcused absences, but their parents would be notified. A female Pioneer student said there had been racial harmony at the school yesterday for the first time during the auditorium meeting. She called it a "strange sort of unity- not racial tensión but student tensión with the white administration." She commended the administration for s h o w i n g "good sense in leaving us alone to resolve this by ourselves." Pioneer student Jim McCargar disagreed, and said the school forcing the students back to class under threat of suspension "suppressed the good feeling of unity" among the students yesterday. "We realized that we had a human relations problem at the high school and we wanted to do something about it." McCargar asked for "understanding'' from the school board and school officials, not punitive action. The white students who spoke last night said the student body supported the black demands, particularly the one for more black teachers, counselors and coaches. ' ' Y o u m u s t get ablack counselor into that school, just one person that the blacks can trust. If we can just sit down and talk we can solve the problem," a Pioneer girl said. (The black students at Pioneer have been asking for a black counselor for two years now. None has been hired. There is only one full-time black counselor in the public school system.) Westerman said he supported all decisions made this week by the Pioneer staff. The pólice were not called in yesterday, he said, because "we feit this could be resolved through dis cussion." He revealed that he did meet with Ann Arbor Pólice Chief Walter Krasny yesterday morning at Pioneer, however, to discuss contingency plans in case it was decided to close the school. The superintendent agreed the schools need the "faith and partnership" of the students, and said he is "very much conscious that no number of pólice will control the school indefinitely." But he said the schools would be closed unless "reasonable rules are abided by." There are "minimal regulations" which must be obeyed for the school district to functión, Westerman said, and he invited those parents and students who disagree to "go elsewhere." Pioneer Principal Rokicki agreed there was a "unity among students yesterday to accomplish something worthwhile at the high school," but he pleaded for students to understand a demand can't be madeonedayandtotal changes be put into effect the next. Rokicki asked for permission i to close Pioneer at 2 p.m. today I so thtí faculty can discuss stu-l dent suggestions which will bel solicited during the day. Hel added that several demands of ] the black students could be met j immediately, such as black j entertainment at after-game ' dances. The black demands will be discussed further today by the faculty. Pioneer administrative assistant Charles Eastwood, who is also Student Council adviser, was praised by a student and Westerman last night for his role in the Pioneer situation. "If you can get a black counselor like Dr. Eastwood, you'll have gone a long way," the student said. Several students applauded her remark.