'We're A Part Of This World Too' 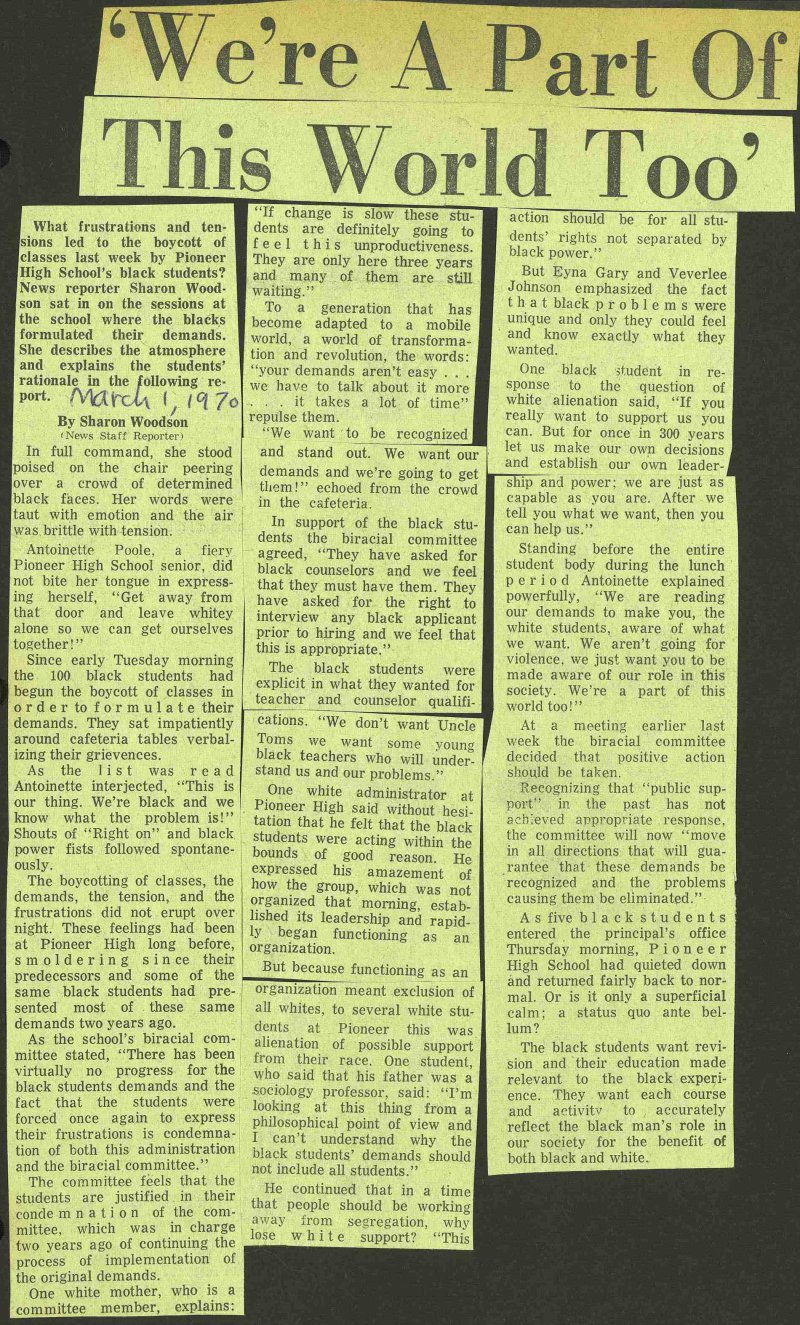 I I What frustraiions and tensions led to the boycott of classes last week by Pioneer High SchooI's black students? News reporter Sharon Woodson sat in on the sessions at the school where the blacks formulated their demands. She describes the atmosphere and explains the students' rationale in the following report. fxrd ( ii 7i In full command, she stood poised on the chair peering over a crowd of determined black faces. Her words were taut with emotion and the air was brittle with tensión . Antoinette Poole, a fiery Pioneer High School senior, did not bite her tongue in expressing herself, "Get away from that door and leave whitey alone so we can get ourselves together!" Since early Tuesday morning the 100 black students had begun the boycott of classes in order to formúlate their demands. They sat impatiently around cafetería tables verbalizing their grievences. As the list was r e a d Antoinette interjected, "This is our thing. We're black and we know what the problem is!" Shouts of "Right on" and black power fists followed spontaneously. The boycotting of classes, the demands, the tensión, and the frustrations did not erupt over night. These feelings had been at Pioneer High long before, smoldering since their predecessors and some of the same black students had presented most of these same demands two years ago. As the school's biracial committee stated, "There has been virtually no progress for the black students demands and the fact that the students were torced once again to express their frustrations is condemnation of both this administration and the biracial committee." The committee fèels that the students are justif ied . in their conde m n a t i o n of the committee, which was in charge two years ago of continuing the process of implementation of the original demands. One white mother, who is a committee member, explains: If change is slow these students are definitely going to f e e 1 t h i s unproductiveness. They are only here three years and many of them are still waiting." To a generation that has become adapted to a mobile world, a world of I tion and revolution, the words: I "your demands aren't easy ... I we have to talk about it more I . . . it takes a lot of time" I repulse them. "We want 'to be recognized and stand out. We want our demands and we're going to get them!" echoed from the crowd in the cafeteria. In support of the black students the biracial committee agreed, "They have asked for black counselors and we feel that they must have them. They have asked for the right to interview any black applicant prior to hiring and we feel that this is appropriate." The black students were explicit in what they wanted for teacher and counselor qualificationsTWe don't want Uncle Toms we want som e young black teachers who will understand us and our problems." One white administrator at Pioneer High said without hesitation that he feit that the black students were acting within the bounds of good reason. He expressed his amazement of how the group, which was not organized that morning, established its leadership and rapidly began functioning as an organization. But because functioning as an organization meant exclusión of all whites, to several white students at Pioneer this was alienation of possible support from their race. One student, who said that his father was a sociology professor, said: "I'm I looking at this thing from a I philosophical point of view and I I can 't understand why thel black students' demands shouldl not include all students." I He continued that in a timel that people should be workingl away from segregation, whyl lose white support? "Thisl action should be for all stu dents' rights not separated by black power." But Eyna Gary and Veverlee Johnson emphasized the fact that black p r o b 1 e m s were unique and only they could feel and know exactly what they wanted. One black student in response to the question of white alienation said, "If you really want to support us you can. But for once in 300 years let us make our own decisions , and establish our own i ship and power; we are just as capable as you are. After we teil you what we want, then you can help us." Standing before the entire student body during the lunch p e r i o d Antoinette explained powerfully, "We are reading our demands to make you, the white students, aware of what we want. We aren't going for violence, we just want you to be made aware of our role in this society. We're a part of this world too!" At a meeting earlier last week the biracial committee decided that positive action should be taken. Recognizing that "public support" in the past has not aebieved appropriate response, the committee will now "move in all directions that will guarantee that these demands be recognized and the problems causing them be eliminated." A s f ive black students entered the principal's office Thursday morning, Pioneer High School had quieted down ánd returned fairly back to normal. Or is it only a superficial calm; a status quo ante bellum? The black students want revisión and their education made relevant to the black exper,ience. They want each course and activitv to accurately reflect the black man 's role in our society for the benefit of both black and white..