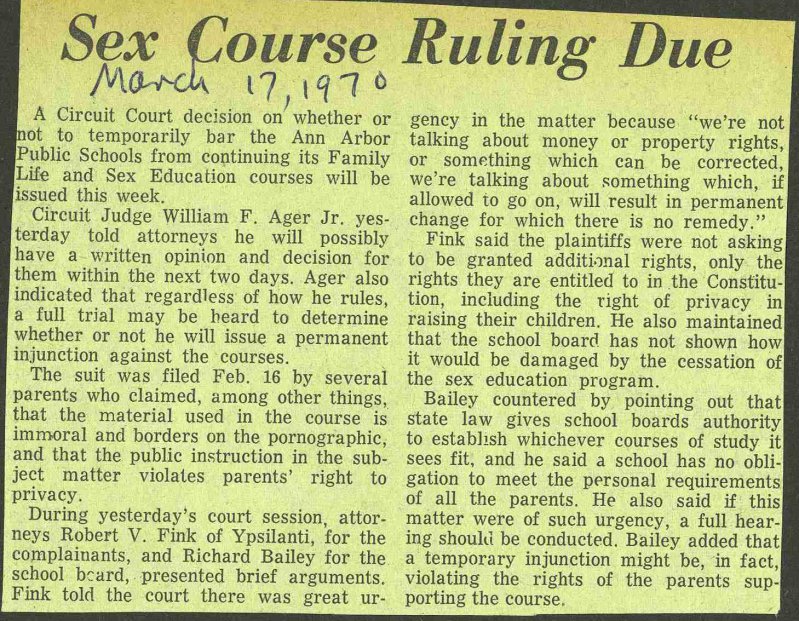 A Circuit Court decisión on whether or hot to temporarily bar the Ann Arbor Public Schools from continuing its Family Life and Sex Education courses will be issued this week. Circuit Judge William F. Ager Jr. yesterday told attorneys he will possibly have a written opinión and decisión for them within the next two days. Ager also indicated that regardless of how he rules, a full trial may be heard to determine whether or not he wiU issue a permanent injunction against the courses. The suit was filed Feb. 16 by several parents who claimed, among other things, that the material used in the course is immoral and borders on the pornographic, and that the public instruction in the subject matter violates parents' right to privacy. During yesterday's court session, attorneys Robert V. Fink of Ypsilanti, for the complainants, and Richard Bailey for the school bcard, presented brief arguments. Fink told the court there was great gency in the matter because "we're not talking about money or property rights, or something which can be corrected, we're talking about something which, if allowed to go on, will result in permanent i change for which there is no remedy." Fink said the plaintiffs were not asking to be granted additional rights, only the rights they are entitled to in the Constitution, including the right of privacy in raising their children. He also maintained that the school board has not shown howl it would be damaged by the cessation of the sex education program. Bailey countered by pointing out that state law gives school boards authority to establish whichever courses of study it sees fit, and he said a school has no obligation to meet the personal requirements of all the parents, He also said if this matter were of such urgency, a full hearing shoulii be conducted. Bailey added that a temporary injunction might be, in fact violating the rights of the parents supporting the course.