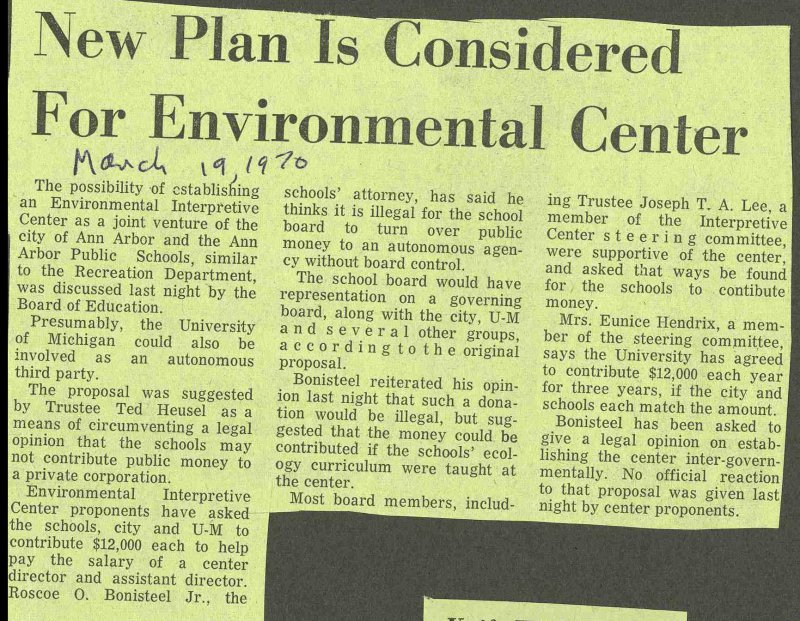 The possibility of cstablishing an Environmental Interpretive Center as a joint venture of the city of Ann Arbor and the Ann Arbor Public Schools, similar to the Recreation Department, was discussed last night by the Board of Education. Presumably, the University of Michigan could also be involved as an autonomous third party. The proposal was suggested by Trustee Ted Heusel as a means of circumventing a legal opinión that the schools may not contribute public money to a private Corporation. Environmental Interpretive Center proponents have asked the schools, city and U-M to contribute $12,000 each to help pay the salary of a center director and assistant director Roscoe O. Bonisteel Jr.. the schools' attorney, has said he thmks it is illegal for the school board to turn over public money to an autonomous agency without board control. The school board would have representation on a governing board, along with the city, U-M and several other groups accordingtothe original proposal. Bonisteel reiterated his opinión last night that such a donation would be illegal, but suggested that the money could be contributed if the schools' ecology curriculum were taught at the center. Most board members, ing Trustee Joseph T. A. Lee a member of the Interpretive Center steering committee were supportive of the center and asked that ways be found for the schools to contibute money. Mrs. Eunice Hendrix, a member of the steering committee, says the University has agreed to contribute $12,000 each year I for three years, if the city and schools each match the amount. I Bonisteel has been asked tol give a legal opinión on estab-l lishing the center 1 mentally. No official reactionl to that proposal was given last! night by center proponents. I ■ H