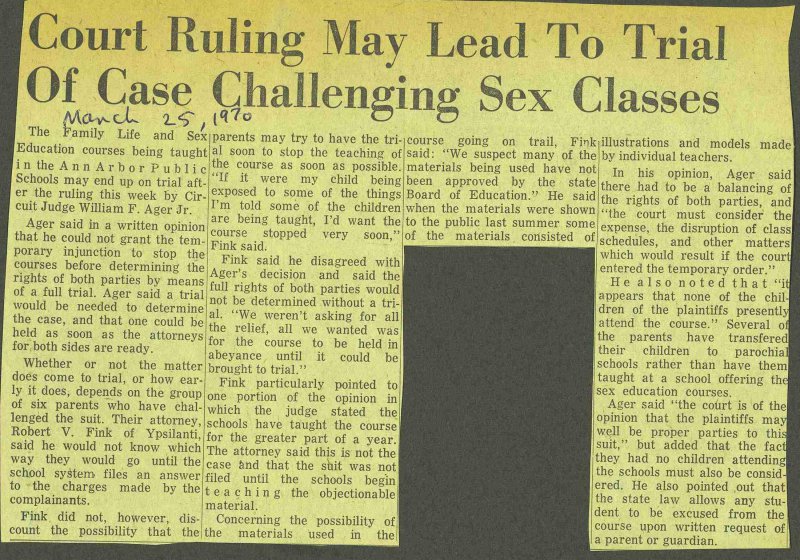 The Family Life and Sex Education courses being taught in theAnnArbor Public Schools may end up on trial after the ruling this week by Circuit Judge William F. Ager Jr. Ager said in a written opinión that he could not grant the temporary injunction to stop the courses before determining the rights of both parties by means of a full trial. Ager said a trial would be needed to determine the case, and that one could be held as soon as the attorneys forboth sides are ready. Whether or not the matter does come to trial, or how earIy it does, depends on the group of six parents who have challengèd the suit. Their attorney, Robert V. Fink of Ypsilanti, said he would not know which way they would go until the school systero files an answer to the charges made by the complainants. Fink, did not, however, discount the possibility that the parents may try to have the trial soon to stop the teaching of the course as soon as possible. "If it were my child being exposed to some of the things I'm told some of the children are being taught, I'd want the course stopped very soon," Fink said. Fink said be disagreed with Ager's decisión and said the full rights of both parties would not be determined without a tri-I al. "We weren't asking for all :he relief, all we wanted was for the course to be held in abeyance until it could be brought to trial." Fink particularly pointed to one portion of the opinión in which the judge stated the chools have taught the course or the greater part of a year.l The attorney said this is not thel ase and that the shit was notl ïled until the schools begin I e a c h i n g the objectionable I material. Concerning the possibility of I ie materials used in the I course going on trail, Fink said: "We suspect many of the materials being used have not been approved by the state Board of Education." He said when the materials were shown to the public last summer some of the materials consisted of illustrations and models made by individual teachers. In his opinión, Ager said there liad to be a balancing of the rights of both parties, and "the court must consider the expense, the disruption of classl schedules, and other matters which would result if the courti entered the temporary order." He also noted that "id appears that none of the chilJ dren of the plaintiffs presentid attend the course." Several ofl the parents have transferedl their children to parochiaï schools rather than have theml taught at a school offering the] sex education courses. Ager said "the coürt is of thel opinión that the plaintiffs majJ well be proper parties to thisl suit," but added that the facii they had no children attendingl the schools must also be consid-l ered. He also pointed ,out thatl the state law allows any stu-l dent to be excused from thel course upon written request off a parent or guardián.