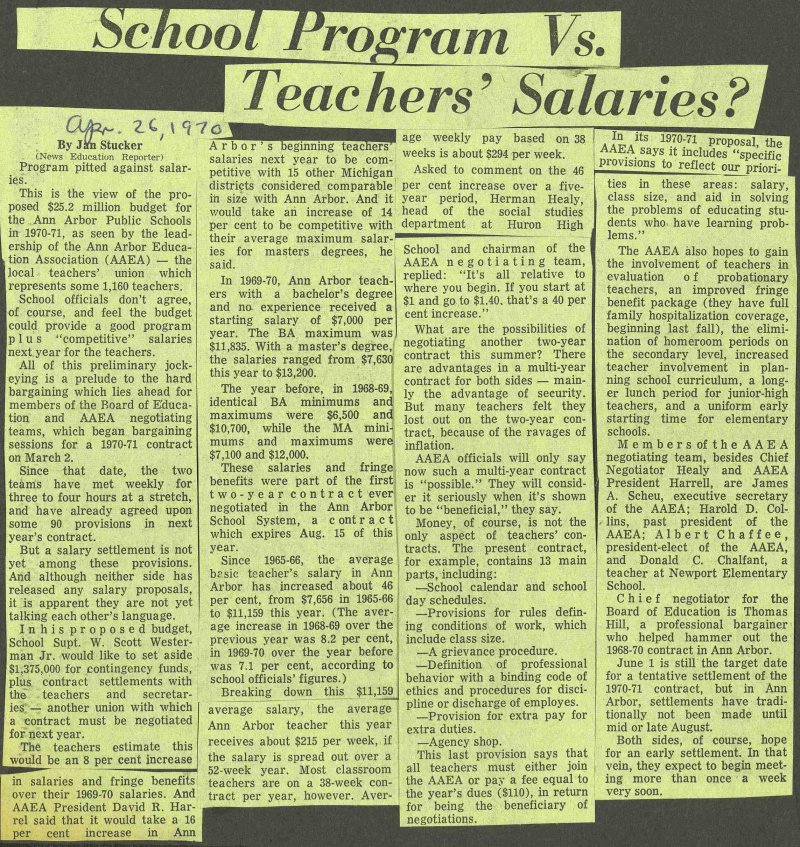 Program pitted against salaries. This is the view of the proposed $25.2 million budget for the Ann Arbor Public Schools in 1970-71, as seen by the leadership of the Ann Arbor Education Assoeiation (AAEA) - the local teachers' union which represents some 1,160 teachers. School officials don't agree, of course, and feel the budget could provide a good program plus "competitive" salaries next year for the teachers. All of this preliminary jockeying is a prelude to the hard bargaining which lies ahead for members of the Board of E'ducation and AAEA negotiating teams, which began bargaining sessions for a 1970-71 contract on March 2. Since that date, the two teams have met weekly for three to four hours at a stretch, and have already agreed upon some 90 provisions in next year's contract. But a salary settlement is not yet among these provisions. And although neither side has released any salary proposals, it is apparent they are not yet talking each other's language. In his proposed budget, School Supt. W. Scott Westerman Jr. would like to set aside $1,375,000 for contingency funds, plus contract settlements with the teachers and secretaries - another union with which a contract must be negotiated for next year. The teachers estímate this would be an 8 per cent increase in salaries and fringe benefits over their 1969-70 salaries. And AAEA President David R. Harrel said that it would take a 16 per cent increase in Ann A r b o r ' s beginning teachers salaries next year to be competitive with 15 other Michigan districts eonsidered comparable in size with Ann Arbor. And it would take an increase of 14 per cent to be competitive with their average maximum salar-1 ies for masters degrees, he said. In 1969-70, Ann Arbor teachers with a bachelor's degree and na experience received a starting salary of $7,000 per year. The BA maximum was $11,835. With a master's degree, the salaries ranged from $7,630 this year to $13,200. The year before, in 1968-69, identical BA mínimums and máximums were $6,500 and $10,700, while the MA minimums and máximums were $7,100 and $12,000. These salaries and fringe benefits were part of the first two-year contract ever negotiated in the Ann Arbor School System, a c ont r a c t which expires Aug. 15 of this year. Since 1965-66, the average besic teacher's salary in Ann Arbor has increased about 46 per cent, from $7,656 in 1965-66 to $11,159 this year. (The average increase in 1968-69 over the previous year was 8.2 per cent, in 1969-70 over the year before was 7.1 per cent, according to school officials' figures.) Breaking down this $11,159 average salary, the average Ann Arbor teacher this year receives about $215 per week, if the salary is spread out over a 52-week year. Most classroom teachers are on a 38-week contract per year, however. age weekly pay based on 38 weeks is about $294 per week. Asked to comment on the 46 per cent increase over a fiveyear period, Herman Healy, head of the social studies department at Hurón High School and chairman of the AAEA negotiating team, replied: "It's all relative to where you begin. If you start at $1 and go to $1.40. that's a 40 per cent increase." What are the possibilities of negotiating another two-year contract this summer? There are advantages in a multi-year contract for both sides - mainly the advantage of seeurity. But many teachers feit they lost out on the two-year contract, because of the ravages of inflation. AAEA officials will only say now such a multi-year contract is "possible." They will consider it seriously when it's shown to be "beneficial," they say. Money, of course, is not the only aspect of teachers' contracts. The present contract, for exámple, contains 13 main parts, including: -School calendar and school day schedules. - Provisions for rules defining conditions of work, which include class size. - A grievance procedure. - Definition of professional behavior with a binding code of ethics and procedures for discipline or discharge of employés. - Provisión for extra pay for extra duties. - Agency shop. This last provisión says that all teachers must either join the AAEA or pay a fee equal to the year's dues ($110), in return i for being the beneficiary of negotiations. in its WOlpToposaHhel AAEA says it includes "speeific I provisions to reflect cmríri [ ties in these areas: salary, class size, and aid in solving the problems of educating students who. have learning problems." The AAEA álso hopes to gain the involvement of teachers in evaluation o f probationary teachers, an improved fringe benefit package (they have full family hospitalization coverage, beginning last fall), the elimination of homeroom periods on the secondary level, increased teacher involvement in planning school curriculum, a longer lunch period for junior-high teachers, and a uniform early starting time for elementary schools. Members of the AAEA negotiating team, besides Chief Negotiator Healy and AAEA President Harrell, are James A. Scheu, executive secretary of the AAEA; Harold D. Col-. ■ lins, past president of the AAEA; Albert Chaffee, president-elect of the AAEA, and Donald C. Chalfant, a teacher at Newport Elementary School. Chief negotiator for the Board of Education is Thomas Hill, a professional bargainer who helped hammer out the 1968-70 contract in Ann Arbor. June 1 is still the target date for a tentative settlement of the 1970-71 contract, but in Ann Arbor, settlements have traditionally not been made until mid or late August. Both sides, of course, hope for an early settlement. In that vein, they expect to begin meeting more than once a week very soon. ,