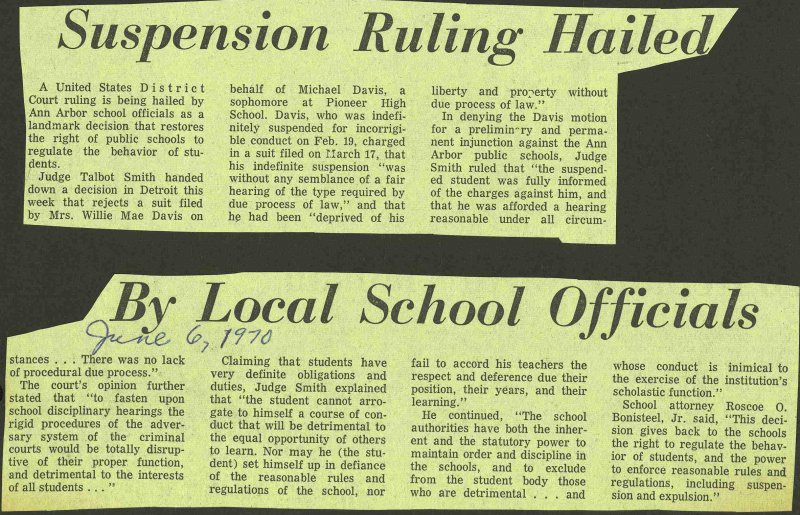 A United States District Court ruling is being hailed by Ann Arbor school officials as a landmark decisión that restores the right of public schools to regúlate the behavior of students. Judge Talbot Smith handed down a decisión in Detroit this week that rejects a suit filed by Mrs. Willie Mae Davis on behalf of Michael Davis, a sophomore at Pioneer High School. Davis, who was indefinitely suspended for incorrigible conduct on Feb. 19, charged in a suit filed on llarch 17, that his indefinite suspension "was without any semblance of a fair hearing of the type required by due process of law," and that he had been "deprived of his liberty and property without due process of law." In denying the Davis motion for a prelimiirry and permanent injunction against the Ann Arbor public schools, Judge Smith ruled that "the suspended student was fully informed of the charges against him, and that he was afforded a hearing reasonable under all stances . . . Tnere was no lack of procedural due process." The court's opinión further stated that "to f asten upon school disciplinary hearings the rigid procedures of the adversary system of the criminal courts would be totally disruptive of their proper function, and detrimental to the interests of all students ..." Claiming that students have very definite obligations and duties, Judge Smith explained that "the student cannot arrógate to himself a course of conduct that will be detrimental to the equal opportunity of others to learn. Nor may he (the student) set himself up in defiance of the reasonable rules and regulations of the school, nor fail to accord his teachers the respect and deference due their position, their years, and their learning." He continued, "The school authorities have both the inherent and the statutory power to maintain order and discipline in the schools, and to ex elude from the student body those who are detrimental . . . and whose conduct is inimical to the exercise of the institution's scholastic function." School attorney Roscoe 6. Bonisteel, Jr. said, "This decisión gives back to the schools the right to regúlate the behavior of students, and the power to enforce reasonable rules and regula tions, including suspension and expulsión." i