School Board Considers Busing Of 75 Children 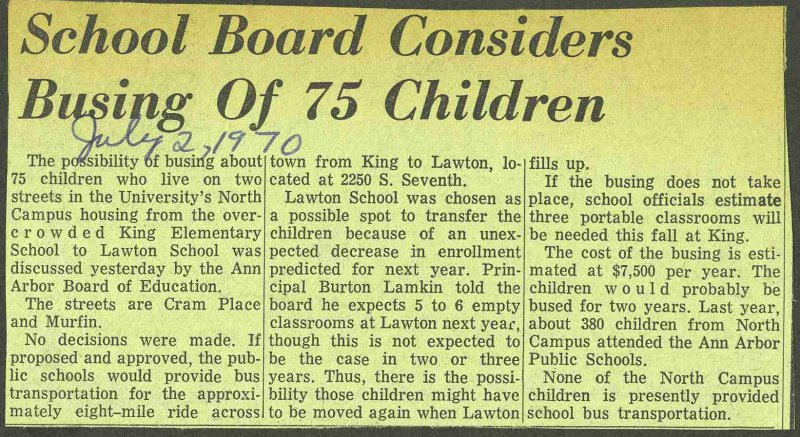 The posibility Of busing about 75 children who live on two streets in the University's North Campus housing from the overcrowded King Elementary School to Lawton School was discussed yesterday by the Ann Arbor Board of Education. The streets are Cram Place and Murfin. No decisions were made. If proposed and approved, the public schools would provide bus transportaron for the approximately eight-mile ride across town from King to Lawton, located at 2250 S. Seventh. Lawton School was chosen as a possible spot to transfer the children because of an unexpected decrease in enrollment predicted for next year. Principal Burton Lamkin told the board he expects 5 to 6 empty classrooms at Lawton next year, though this is not expected to be the case in two or three years. Thus, there is the possibility those children might have to be moved again when Lawton fills up. If the busing does not take ' place, school officials estimate three portable classrooms Will be needed this fall at King. The cost of the busing is estimated at $7,500 per year. The children would probably be bused for two years. Last year, about 380 children from North Campus attended the Ann Arbor Public Schools. None of the North Campus children is presently provided school bus transportation.