Board Split, Staggered But Not Junior Highs 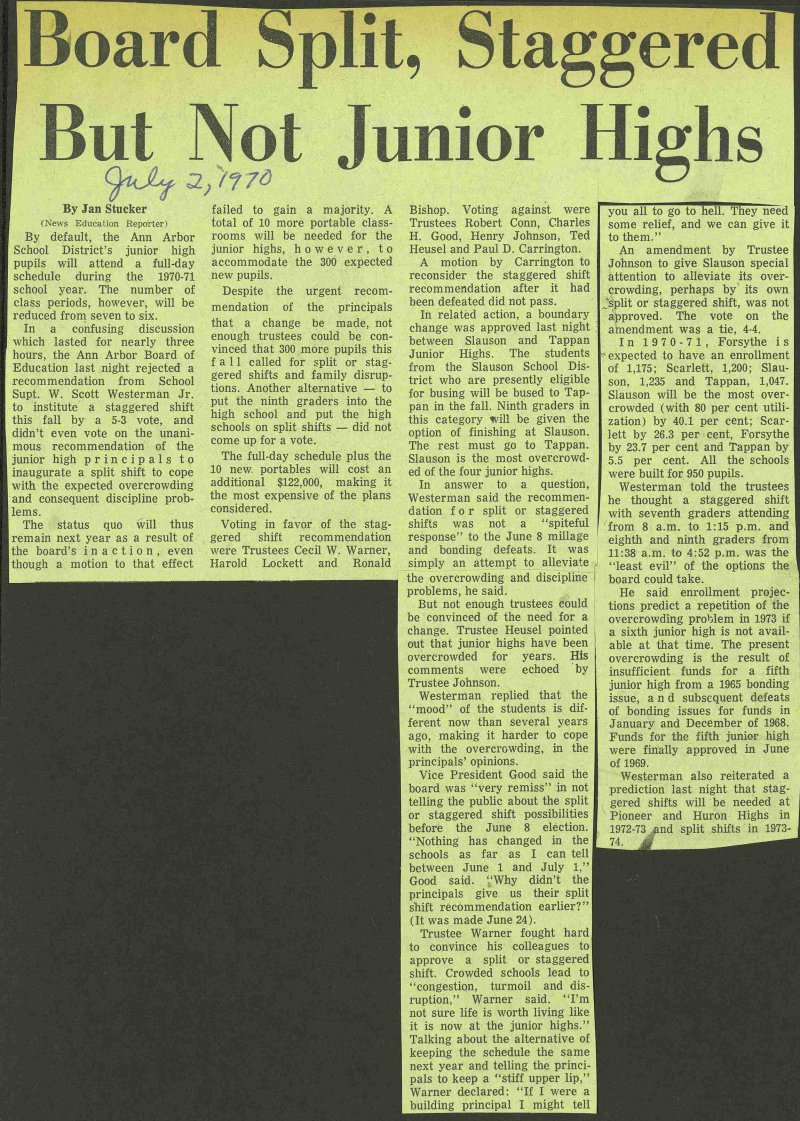 By default, the Ann Arbor School District's junior high pupils will attend a full-day schedule during the 1970-71 school year. The number of class periods, however, will be reduced from seven to six. In a confusing discussion which lasted for nearly three hours, the Ann Arbor Board of Education last night rejected a recommendation from School Supt. W. Scott Westerman Jr. to institute a staggered shift this fall by a 5-3 vote, and didn't even vote on the unanimous recommendation of the junior high principáis to inaugúrate a split shift to cope i with the expected overcrowding and consequent discipline problems. The status quo will thus remain next year as a result of the board's inaction, even though a motion to that effect failed to gain a majority. A total of 10 more portable classrooms will be needed for the junior highs, however, to accommodate the 300 expected new pupils. Despite the urgent recommendation of the principáis that a change be made, not enough trustees could be eonvinced that 300 more pupils this f a 1 1 called for split or staggered shifts and family disruptions. Another alternative - to put the ninth graders into the high school and put the high schools on split shifts - did not come up for a vote. The full-day schedule plus the 10 new. portables will cost an additional $122,000, making it the most expensive of the plans considered. Voting in favor of the staggered shift recommendation were Trustees Cecil W. Warner, Harold Lockett and Ronald Bishop. Voting against were Trustees Robert Conn, Charles H. Good, Henry Johnson, Ted Heusel and Paul D. Carrington. A motion by Carrington to reconsider the staggered shift recommendation after it had been defeated did not pass. In relatëd action, a boundary change was appröved last night between Slauson and Tappan Junior Highs. The students from the Slauson School District who are presently eligible for busing will be bused to Tappan in the fall. Ninth graders in this category will be given the option of finishing at Slauson. The rest must go to Tappan. Slauson is the most overcrowded of the four junior highs. In answer to a question, Westerman said the recommendation for split or staggered shifts was not a "spiteful response" to the June 8 millage and bonding defeats. It was simply an attempt to alleviate the overcrowding and discipline problems, he said. But not enough trustees could be convinced of the need for a change. Trustee Heusel pointed out that junior highs have been overcrowded for years. His comments were echoed by Trustee Johnson. Westerman replied that the "mood" of the students is different now than several years ago, making it harder to cope with the overcrowding, in the principáis' opinions. Vice President Good said the board was "very remiss" in not telling the public about the split or staggered shift possibilities before the June 8 eléction. "Nothing has changed in the schools as far as I can teil between June 1 and July 1," Good said. 'v'Why didn't the principáis give us their split shift recommendation earlier?" (It was made June 24). Trustee Warner fought hard to convince his colleagues to approve a split or staggered shift. Crowded schools lead to "congestión, turmoil and disruption," Warner said. "I'm not sure life is worth living like it is now at the junior highs." Talking about the alternative of keeping the schedule the same next year and telling the principáis to keep a "stiff upper lip," Warner declared: "If I were a building principal I might teil you all to go to heil. They need some relief, and we can give it to them." An amendment by Trustee Johnson to give Slauson special attention to alleviate its overcrowding, perhaps by its own split or staggered shift, was not ápproved. The vote on the amendment was a tie, 4-4. In 1970-71, Forsythe i s expected to have an enrollment of 1,175; Scarlett, 1,200; Slauson, 1,235 and Tappan, 1,047. Slauson will be the most overcrowded (with 80 per cent utilization) by 40.1 per cent; Scarlett by 26.3 per cent, Forsythe by 23.7 per cent and Tappan by 5.5 per cent. All the schools were built for 950 pupils. Westerman told the trustees he thought a staggered shift with seventh graders attending f rom 8 a.m. to 1:15 p.m. and eighth and ninth graders from 11:38 a.m. to 4:52 p.m. was the "least evil" of the options the board could take. He said enrollment projections predict a repetition of the overcrowding problem in 1973 f a sixth junior high is not available at that time. The present overcrowding is the result of insufficient funds for a fifth junior high from a 1965 bonding issue, and subsequent defeats of bonding issues for funds in January and December of 1968. Funds for the fifth junior high were finally approved in June of 1969. Vesterman also reiterated a prediction last night that staggered shifts will be needed at Pioneer and Huron Highs in 1972-73 ,iind split shifts in 197374. M __