Course Selections To Be Reduced 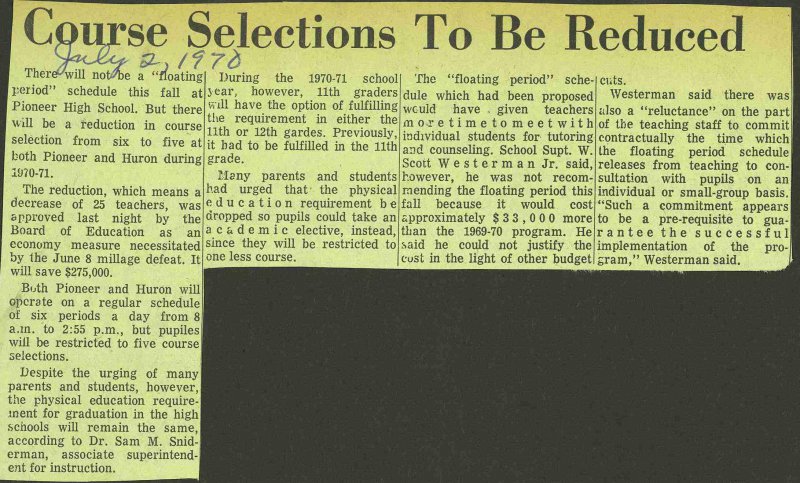 ThereíAvill note a "fíoating [period" schedule this fall at Pioneer High School. But there will be a reduction in course selection from six to five at both Pioneer and Hurón during 1970-71. The reduction, which means a decrease of 25 teachers, was approved last night by the Board of Education as an economy measure necessitated by Ihe June 8 millage defeat. It will save $275,000. Both Pioneer and Huron will opérate on a regular schedule of six periods a day from 8 a.m. 'to 2:55 p.m., but pupiles wiil be restricted to five course I selections. Despite the urging of manyl parents and students, however,! tiie physical education require-l inent for graduation in the highl schools will remain the same.l according to Dr. Sam M. Snid-I erman, associate superintend-l ent for instruction. During the 1970-71 school j-ear, however, llth graders wül have the option of fulfilling the requirement in either the llth or 12th gardes. Previously, it bad to be fulfilled in the llth grade. Msny parents and students had urged that' the physical education requirement b e dropped so pupils could take an academie elective, instead, since they will be restricted to one less course. The "floating period" schedule which had been proposed wculd have . given teachers moretimetomeetwith individual students for tutoring and counseling. School Supt. W. Scott Westerman Jr. said, however, he was not recomrnending the floating period this fall because it would cost approximately $33,000 more than the 1969-70 program. He .said he could not justify the cust in the light of other budget cuts. Westerman said there was íJso a "reluctanee" on the part of the teaching staff to commit contractually the time which the floating period schedule releases f rom teaching to consultation with pupils on an individual or small-group basis. "Such a commitment appears to be a pre-requisite to guarantee the successful implementation of the pro-J gram," Westerman said. Jj