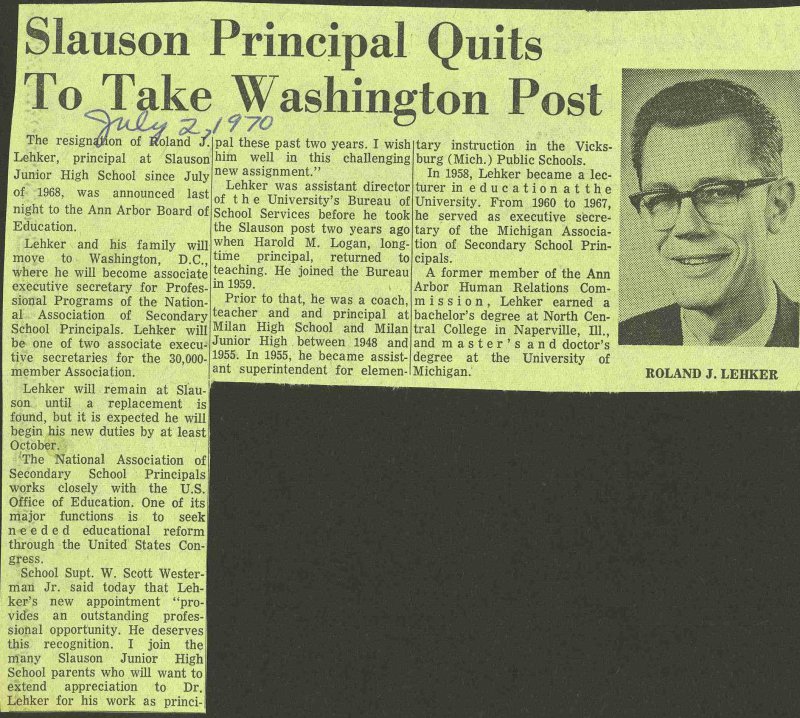 The resignation of Roland J. Lehker, principal at Slauson Junior High School since July of 1968, was announced last night to the Ann Arbor Board of Education. Lehker and his family will move to Washington, D.C., where he will become associate executive secretary for Professional Programs of the National Association of Secondary School Principáis. Lehker will be one of two associate executive secretarles for the 30,000member Association. Lehker will remain at Slauson until a replacement is found, but it is expected he will begin his new duties by at least] October. The National Association of Secondary School Principáis! works closely with the U.S. Office of Education. One of its major functions is to seek needed educational reform through the United States Congress. School Supt. W. Scott Westerman Jr. said today that Leh-j ker's new appointment "pro-l vides an outstanding profes-] sional opportünity. He deserves this recognition. I join the many Slauson Junior High School parents who will want tol extend appreciation to Dr. Lehker for his work as princi-J . pal these past two years. I wish i him well in this challenging , new assignment." Lehker was assistant director of the University's Bureau of ■ School Services before he took the Slauson post two years ago when Harold M. Logan, longtime principal, returned to teaching. He joined the Bureau in 1959. , Prior to that, he was a coach, teacher and and principal at Milan High School and Milan Junior High between 1948 and 1955. In 1955, he became assistant superintendent for tary instruction in the Vicksburg (Mich.) Public Schools. In 1958, Lehker beeame a lecturer ineducationatthe University. From 1960 to 1967, he served as executive secretary of the Michigan Association of Secondary School Principáis. A former member of the Ann Arbor Human Relations Comm i s s i o n , Lehker earned a bachelor's degree at North Central College in Naperville, 111., and master's and doctor's degree at the University of Michigan.