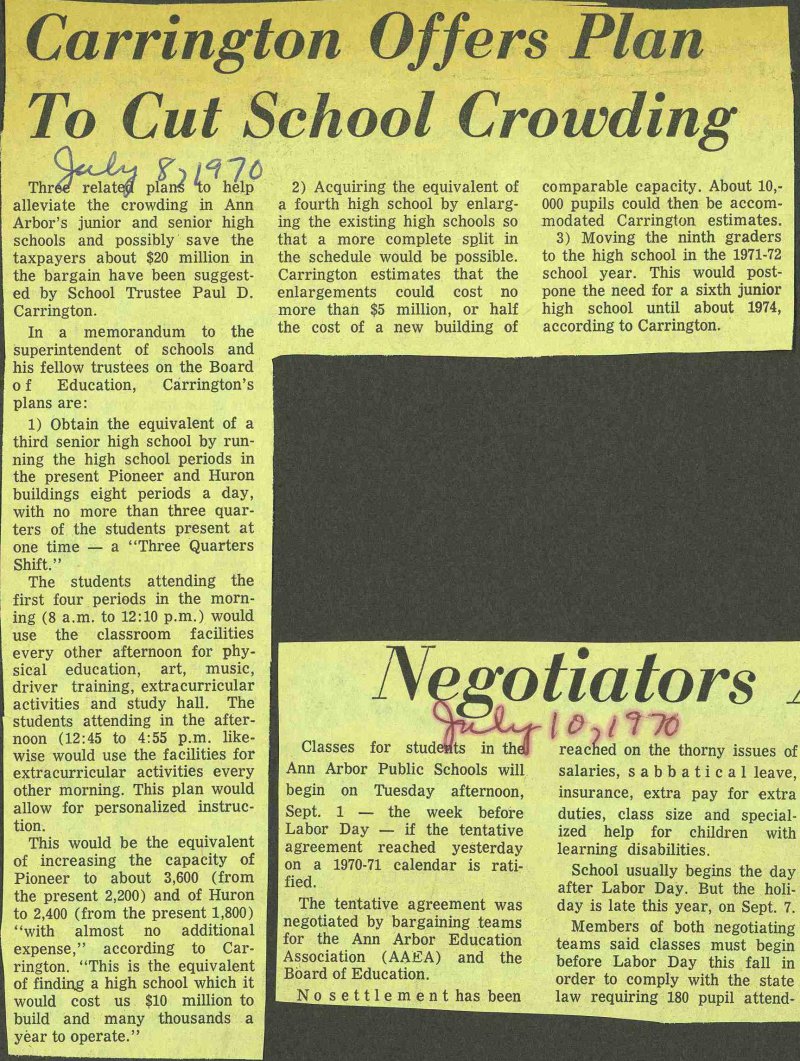 ThráTreíatif plana 4o help alleviate the crowding in Ann Arbor's junior and senior high schools and possibly save the taxpayers about $20 million in the bargain have been suggested by School Trustee Paul D. Carrington. In a memorandum to the superintendent of schools and his fellow trustees on the Board o f Education, Carrington's plans are: 1) Obtain the equivalent of a third senior high school by running the high school periods in the present Pioneer and Huron buildings eight periods a day, with no more than three quarters of the students present at one time - a "Three Quarters Shift." The students attending the first four periods in the morning (8 a.m. to 12:10 p.m.) would use the classroom facilities every other afternoon for physical education, art, music, driver training, extracurricular activities and study hall. The students attending in the afternoon (12:45 to 4:55 p.m. likewise would use the facilities for extracurricular activities every other morning. This plan would allow for personalized instruction. This would be the equivalent of increasing the capacity of Pioneer to about 3,600 (from the present 2,200) and of Huron to 2,400 (from the present 1,800) "with almost no additional expense," according to Carrington. "This is the equivalent of finding a high school which it would cost us $10 million to build and many thousands a yèar to opérate." 2) Acquiring the equivalent of a fourth high school by enlarging the existing high schools so that a more complete split in the schedule would be possible. Carrington estimates that the enlargements could cost no more than $5 million, or half the cost of a new building of comparable capacity. About 10,000 pupils could then be accommodated Carrington estimates. 3) Moving the ninth graders to the high school in the 1971-72 school year. This would postpone the need for a sixth junior high school until about 1974, according to Carrington.