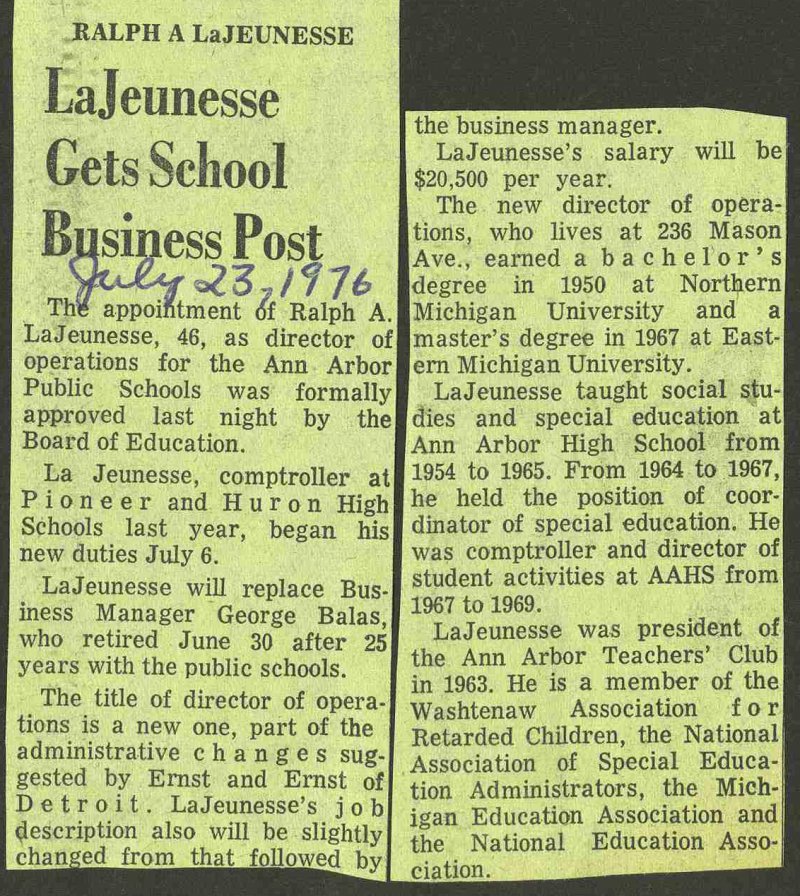 Th appoifitment di Ralph A LaJeunesse, 46, as director o: operations for the Ann Arbor Public Schools was formally approved last night by the Board of Education. La Jeunesse, comptroller al Pioneer and H u r o n High Schools last year, began his new duties July 6. LaJeunesse will replace Business Manager George Balas, who retired June 30 after 25 years with the public schools. The title of director of operations is a new one, part of the administrative c h a n g e s suggested by Ernst and Ernst of Detroit. LaJeunesse's job description also will be slightly changed from that followed by the business manager. LaJeunesse's salary will be $20,500 per year. The new director of opêrations, who lives at 236 Mason Ave., earned a bache 1 o r ' s degree in 1950 at Northern Michigan University and al master's degree in 1967 at Eastern Michigan University. LaJeunesse taught social studies and special education at Ann Arbor High School f rom 1954 to 1965. From 1964 to 1967, he held the position of coördinator of special education. He was comptroller and director of student activities at AAHS from 1967 to 1969. LaJeunesse was president of the Ann Arbor Teachers' Club in 1963. He is a member of the Washtenaw Association f o r Retarded Children, the National Association of Special Education Administrators, the Michigan Education Association and the National Education Association. - - J